What is meant by difference in electric potential?

The fact that a grouping of several charges will exert forces on each other is irrelevant to what the potential difference between two locations in space is. Assuming that you know the instantaneous positions of all the charges what you do is calculate the sum of the individual potentials due to each charge for the first location, then for the second location: $$\Phi_1=\Sigma \dfrac{kq_j}{r_{j1}}\text{ and }\Phi_2=\Sigma \dfrac{kq_j}{r_{j2}}$$ where $r_{j1}$ and $r_{j2}$ are the respective distances from the individual charges to location 1 and location 2, and $\Phi_1$ and $\Phi_2$ are the potentials at those locations due to the charges.

Notice that we don't care how the charges interact with each other while calculating these potentials. Those interactions may cause the charges to change position which will, consequently, change the values of the potentials, but they don't change the method we use to calculate the instantaneous potentials at the locations.

If someone tells us that the charges are fixed in position, that means the potentials won't change, but, again, the charges interacting with each other is irrelevant.

Note that as the spheres are conductors the charges reside on the surface of the spheres.

The surface of a conductor is all at the same potential and potential at a point is defined as the work done in taking unit positive charge from infinity (the arbitrary zero of potential) to the point. 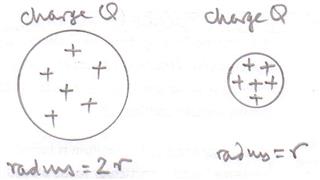 If the two spheres were connected together the because there is a potential difference between the sphere charges would move along the conductor (a current would flow) until the potentials of each sphere was the same as shown in the diagram below.
I will explain later where the numbers come from.

With the assumptions that I have made above one can be a bit more formal in the analysis.

Joining them with a conductor means that charge moves from one sphere to the other with the charges on the spheres now being $Q_2$ and $Q_1$ as in the diagram below. 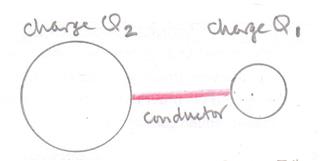 Not the answer you're looking for? Browse other questions tagged electromagnetism electrostatics electricity electric-circuits voltage or ask your own question.

1
What makes charges flowing in a circuit with a higher potential difference perform more work?
0
What is the difference between (+/-) charge and (+/-) potential in an electric circuit?
0
Can voltage be measured manually?
0
What is purpose of drawing electric fields with multiple charges?
2
Why does voltage depend on the conductor resistance in a circuit?
1
In terms of electric charge, what does it mean to “charge a plate to five volts”?
2
Is potential Difference Really a Measure of Electromotive force?
3
What does electrical potential at a point mean?
1
What is the voltage in electrical circuits?
0
Ambiguity between electric potential and voltage?