Which Direction does current flow?

To simplify, I made the voltage equal to difference in charge: V = Q1 - Q2.

If you stack the voltage, current should flow counter-clockwise

If you look at the individual charges, current flows clockwise for the wire on right, and counter-clockwise between the capacitors.

which way does current flow at point P?

(you need to see the picture) 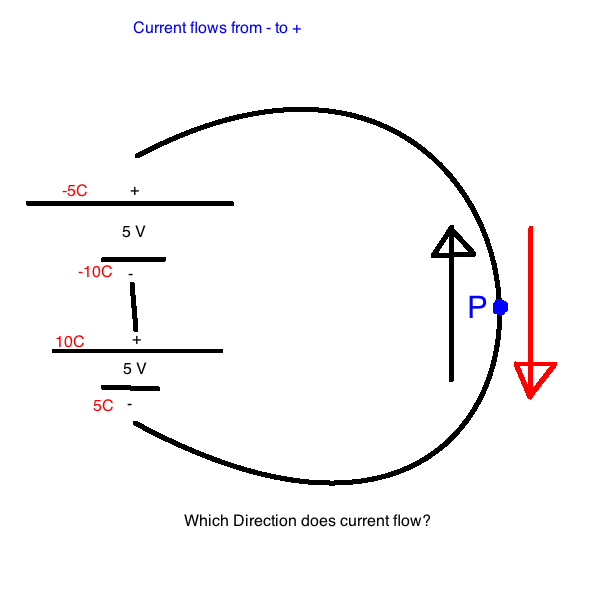 I am looking for the direction of the negative electrons at point P.

The red and black arrow represent the possible direction the electrons might be traveling.

If you look at each individual Capacitor, there is a positive terminal on top and negative terminal on bottom. when you stack voltages, the top should be more positive and the base more negative. The electrons would flow from the base (Negative terminal) to the top (Positive Terminal). This would mean electrons are going in the direction of the BLACK arrow.

Those are my two Hypothesis, as you can see, one results with black and the other results red. They can't both be right.

How to format Answer:

For Batteries: electrons flow with (RED/BLACK) arrow because of this (formula/ruleOfThumb/analogy/reference/wrongAssumption/scienceExperiment)

For Capacitors: electrons flow with (RED/BLACK) arrow because of this (formula/ruleOfThumb/analogy/reference/wrongAssumption/scienceExperiment/sameReason)

Browse other questions tagged electric-current charge capacitance voltage or ask your own question.

61
In what order would light bulbs in series light up when you close a long circuit?

3
Potential Difference Between Capacitors in Series
1
Typo in physics book (capacitors)
1
Charging a capacitor (terminals)
0
Explaining why there is current in a circuit with a capacitor whilst the capacitor is charging
0
Why does current have to flow in the same direction?
0
In which terminal does current starts to flow first i.e. positive or negative?
4
What happens when electrons reach the battery?
7
Does an electric current flow in an open circuit?
0
Conventional current, electron flow and ammeter