How does the state variables $(P,V)$ remain constant for a system with adiabatic wall

I have been very confused regarding how my physics textbook differentiates b/w an adiabatic wall and a diathermic wall.

The term ‘equilibrium’ in thermodynamics appears in a different context : we say the state of a system is an equilibrium state if the macroscopic variables that characterize the system do not change in time.

In general, whether or not a system is in a state of equilibrium depends on the surroundings and the nature of the wall that separates the system from the surroundings. Consider two gases $A$ and $B$ occupying two different containers. We know experimentally that pressure and volume of a given mass of gas can be chosen to be its two independent variables. Let the pressure and volume of the gases be $(P_A, V_A)$ and $(P_B, V_B)$ respectively. Suppose first that the two systems are put in proximity but are separated by an adiabatic wall – an insulating wall (can be movable) that does not allow flow of energy (heat) from one to another. The systems are insulated from the rest of the surroundings also by similar adiabatic walls. The situation is shown schematically in $\text{Fig. 12.1(a)}$. In this case, it is found that any possible pair of values $(P_A, V_A)$ will be in equilibrium with any possible pair of values $(P_B, V_B )$. 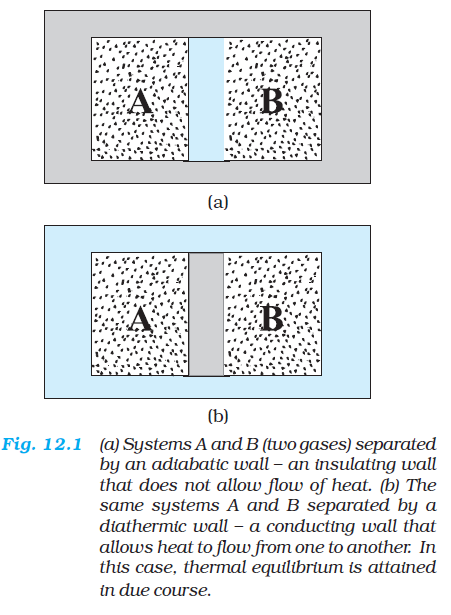 The full text on this topic in the textbook is here on the second page in section 12.1

What was my train of thought after reading this was as follows:-

The text tells that we can select the pressure and volume of the gas independently that leaves the temperature of the system to be determined which must depend on the independent variables $P$ & $V$. Now, if the system $A$ and $B$ have been assigned the independent state variables $(P_A,V_A)$ and $(P_B,V_B)$ respectively then lets say that their temperature initially are $T_A$ & $T_B$ respectively. So, through this what the text wants to convey is that that by assigning any two independent variables independently we assign the third statet variable too, well that was a given.

Now, let me state my concern regarding the text that bugs me:-

The text states that the adiabatic wall "can" be movable. Now, since the adiaabatic wall doesn't allow transfer of heat from the system to the surroundings, so the adiabatic wall moves(recall that I assumed the wall to be movable) till the system $A$ & $B$ exert equal pressure on the adiabatic wall, hence changing there state variables to, say, $(P,V_A',T_A)$ and $(P,V_B',T_B)$ respectively as time passes following and isothermal process while achieving the equilibrium.

But, the text states that:-

Edit:- To conclude my post my main problem with the text is as follows:-

If two systems are separated by a movable adiabatic wall and their initial state functions are $(P_A,V_A)$ and $(P_B,V_B)$, then due to the wall being movable wouldn't their state functions would change with time to, say, $(P,V_A')$ and $(P,V_B')$. So, for no arbitrary state function of both the systems would the systems remain in equilibrium initially, but the book states otherwise.

If two systems are separated by a movable adiabatic wall and their initial state functions are ($P_A$,$V_A$) and ($P_B$,$V_B$), then due to the wall being movable wouldn't their state functions would change with time to, say, ($P$,$V'_A$) and ($P$,$V'_B$). So, for no arbitrary state function of both the systems would the systems remain in equilibrium initially, but the book states otherwise.

9
How to understand the indeterminate process in thermodynamics?
0
Consideration on the total entropy variation for 2 ideal gases
1
Compression of ideal gas using an adiabatic-movable wall - does the energy of the gas change?
1
In calculating entropy change of surroundings how do we find the initial state?
0
How can a system/surrounding never be restored to it's initial state for irreversible cyclic processes?