As written in the title it's a somewhat rhetoric question, so let me be more clear.

Let's say I have two mirrors facing each other. They are perfectly aligned and perfectly reflective. I'm looking through one of them (using the one-sided mirror effect) and see what seems to be infinite reflections.

If I look closely at the vanishing point, I obviously can't see very well what goes on there, because the reflections are too small. My question is, are there other limitations?

a) If I look close enough to the vanishing point, is there a point at which the light would have to travel too much distance to reach me that no photon would actually make it?

b) If I start looking immediately after turning on the light, it should take a tiny amount of time until all the reflections are created, i.e., it takes time for light to do all the back and forth trips it takes to create the very small images. How good a microscope (telescope?) would I need to be able to see the image being created? That is, to look at a spot and see nothing, and then some epsilon of time later see an image appear. 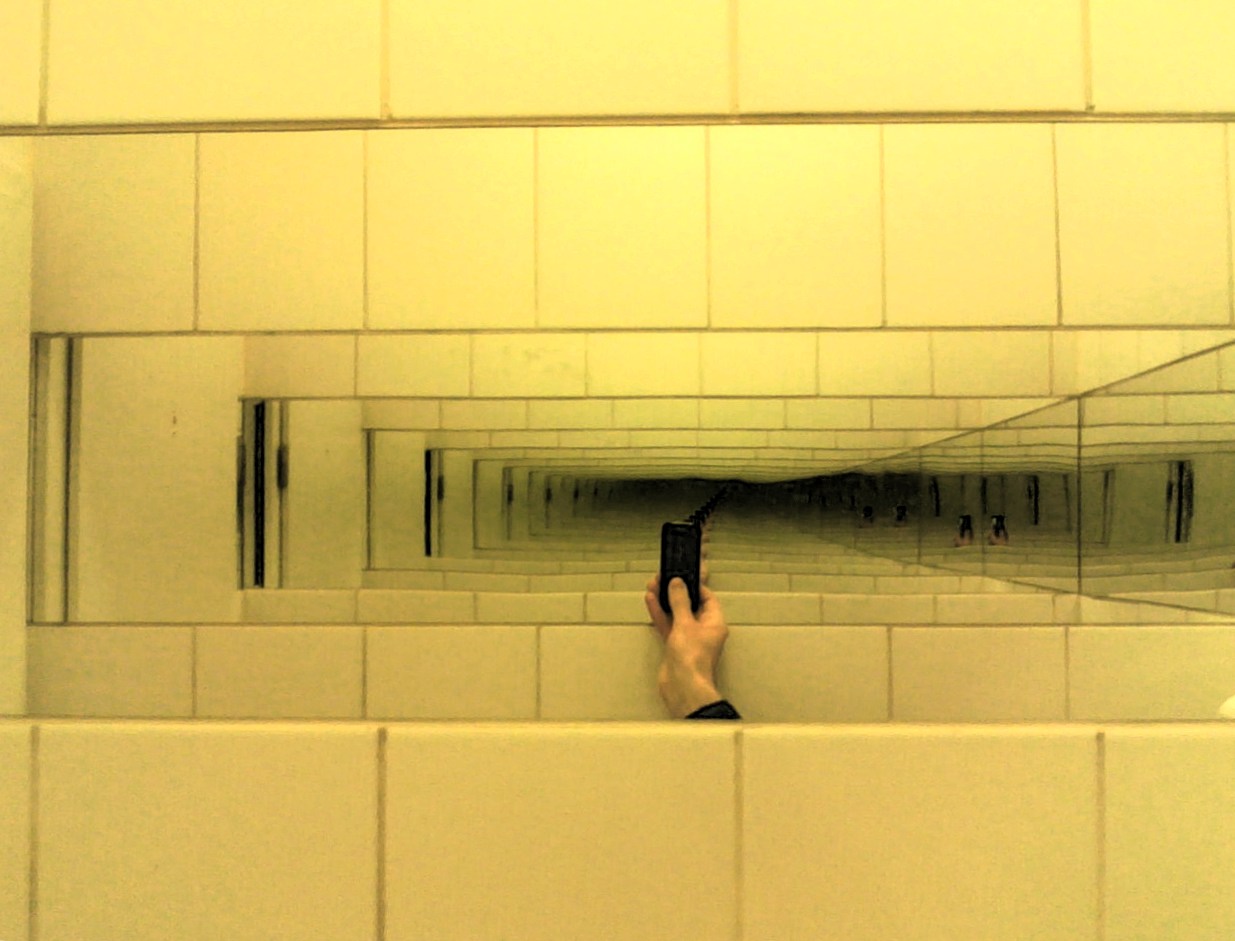 You will only ever see a finite number of images, for practical reasons.

You are forgetting one important very trivial third factor.

When you introduce a probe, you are blocking the infinite perspective point just in the position of the probe, hence you will never be able to capture the perspective point, even if no dissipation exists at all.

Note that in the shown image you look how the perspective curve goes out from the visual image, losting the perpective point.

This is equivalent to say that any photon reaching the perspective point must be perfectlty perpendicular to both mirrors, and also, perpendicular to your probe. That is clearly not possible, thus, you will never see the "bottom of the infinity".

At most, you will see a curvature produced by the multiple reflections, which at some point, will escape from one of the mirrors, effect which will seem like seeing a "rounded wall", lile walking at the side of a giant circle surrounded by infinite copies of your mirrored testing room, just a little twisted by the very small curvature....

As pointed out in the comments, if the probe used for tracing the light rays are is a wire loop, there is actually NO impediments to have infinite reflections, rather than the decay of the environment.

I love these answers, but there's also a more fundamental problem with this thought experiment. Because the speed of light is finite, at any given point in time, you will only be able to see a finite number of reflections. Because, at any instance, there are only a finite number of reflections, then at any instance you are seeing something finite; growing rapidly, yes, but still finite.

Imagine, for instance, that we were somehow able to see fast enough to perceive each image as it was formed. I would be able to tell you exactly how many images had been formed at any instance; since there would always exist a larger number than that of the current number of images, the number of images would never be able to "reach" infinity.

Mathematically speaking YES ... there are infinite reflections as it gets closer to the center... (By Mathematically, I mean we ignore all physical limitations).

But Physically Speaking, however, NO... Human eye has limitation; Light source has limitation; Mirror has its limitation; Your Telescope/Microscope will have limitation... there will not be infinite reflections, because at the center, it gets too dark to see.

And Philosophically... THE QUESTION IS TOO VAGUE this question cannot be answered, because infinite itself cannot be measured/prove outside of the field of Mathematics. Therefore, even if you have infinite reflections, no body can prove that it exist other than having faith... maybe you should just take the leap of faith?!

If you place two mirrors with a 1-meter distance and assuming the light is attached on top of one mirror: 3ns/meter => 333 million bounce/second => 166 million images per mirror per second.

To get an infinite number of images, you need to wait for an infinite time (assuming no loss during bounce).

I'm looking through one of them (using the one-sided mirror effect) and see what seems to be infinite reflections.

In your mirror case (let's also put these in a vacuum) the same happens. On top of that, there is a chance (depending on the laser's frequency) propagating a pair of virtual particles hiding in the dark to a real pair. After an infinite time, you can wave goodbye to your beam.

This is meant to supplement the answer by Brethlosze. There may be a third practical reason you will only ever see a finite number of images. This is due to the air in between the two mirrors. The photons bouncing between the two mirrors, which form the image you are seeing, are presumably traveling in directions perpendicular to the mirrors. During their journey each photon, one by one, may be absorbed by a molecule in the air (likely $N_2$ or $O_2$) and re-emitted in a random direction. Similar scattering processes might also change the energy (thus color) of the photons. Over time, the image might literally decay one photon at a time. This atmospheric effect will prohibit seeing an infinite number of copies of the image, and can be avoided by performing the look-see in a vacuum.

18
Can light continue without a light source?
1
Why don't I see infinite images with parallel mirrors?
27
How are photons "consumed"?
12
Two mirrors facing each other
3
Can we keep a photon bouncing of mirrors for a long time (eg days)?
2
If you drop a candle into an infinite well made of perfect mirrors, would you see it forever?
0
Infinite reflections between two spherical mirrors
0
About reflections between two mirrors, can the reflection be prevented from getting smaller using a bulging shape?

8
Do mirrors have a "resolution" quality to them?
0
Infinite reflections between two spherical mirrors
2
Can the reflection of a candle appear brighter than the candle itself?
2
If you drop a candle into an infinite well made of perfect mirrors, would you see it forever?
1
Why are UV Filters Directional? (or are they?)
0
How do lens capture reflections clearly?
0
Resolution and Magnification
4
Why does oil make images not blurry?
1
What would happen if light hit a non-differentiable curve?