How do traveling far field radio waves break free from the non-traveling near field conditions at the transmitter antenna?

There is no black & white dividing line between these regions - it depends on the purpose of your calculations/investigations. Typically one says that the far-field radiation field dominates if $r \gg \lambda/2\pi$ (where $\lambda$ is the wavelength of the far-field radiation) and if $r \gg l$, where $l$ is the dimension of the antenna. What $\gg$ means is entirely a matter for you.

I read a bit the wiki article on near and far field and antennas.

To start with an electromagnetic wave always travels with velocity c , no matter how the interference patterns of continuous emissions appear.

An analogy: When one is near a lamp one can see the emitting wires or diodes, which means that it is not a plane wave of light but it has a particular structure , at a distance the light source follows the 1/r^2 law of dispersion from a point source and can be described by a spherical wave.

It is not a matter of separating electromagnetic waves, but of diminishing importance of the interference patterns that control the near fields due to the small distance from the source and the shape of the source, the wavelength being the gauge. 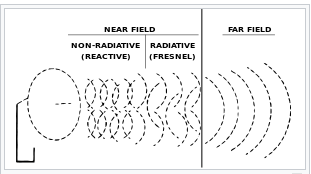 The energy loss in an antenna is intended to be radiation out into space of an electromagnetic wave. The OTHER parts of the energy provided to the antenna are NOT lost, they just cycle energy from inductor/magnetic field energy to capacitive/electric field energy, back and forth, just like an inductor and capacitor (LC tank circuit).

To evaluate an antenna design, the how-much-power-is-emitted question requires a calculation of the fields near the antenna, due to the supplied current at the transmitter frequency. That is important, because nearby objects (the transmitter tower, the ground) and the shape of the antenna elements, determines beam direction. The radiated intensity, though, in any given direction, will only depend on the way those local fields couple to a wave-equation traveling wave solution. So, after solving local fields, one also finds a second part solution, to the far field traveling wave that delivers radio to your receiver.

The calculation has two parts. The physical situation is only ONE part, but we can use approximations at a distance that wouldn't work up close to the antenna (where we care about different answers, anyhow).

6
How EM waves are produced by accelerating charged particles?

1
How do EM waves get detached from an antenna?
0
Has someone measured that in the far field of radio waves, the electric and magnetic field oscillate synchronously?
9
From how far away could Earth's telescopes detect Earth like radio signals?
3
How do electromagnetic waves travel away from an antenna?
3
How does a receiving antenna work given that the electric field is 0 in conductors?
0
How do near-field EM fields change to far-field EM waves at an antenna
1
Why do electromagnetic waves detach from the antenna?
11
How does the human body affect radio reception?