Distance a fired bullet travels in a block of wood

This problem seems to be vary complicated to me, I was wondering if it was even possible with the information that is given.

I would say that this is impossible to calculate with the given information. It would be possible (and more typical) to calculate how far the block of wood moves (or swings) away from its rest position with conservation of momentum/energy.

But if you want to calculate how far the bullet goes into the material, then surely you need to know more about the properties of that material.

Edit: You can think of it like this. What if the box was made out of iron. Then surely, the bullet penetration distance changes but the information given to you is the same. Conclusion: You do not have enough information.

The phrase "how far does the bullet travel in the wood" is a little vague in that it could mean "how far does the wood/bullet pair rise after impact" or it could mean "how deeply does the bullet embed itself into the wood". The former, assuming you are given the bullet's initial speed (this is absolutely needed and I assume it's given somewhere can be answered with the information given; the latter cannot. Mongelo's answer shows that you definitely need more information for the second question.

A trivial, easily justified assumption is to neglect the height change of the block whilst the bullet decelerates. Bullets, roughly, have speeds of about $1{\rm km\,s^{-1}}$, so this is a reasonable assumption and doesn't really count as further information needed.

So now, conservation of momentum will give you the common horizontal velocity of bullet and wood just after impact. You should be able to derive

where $v_B$ is the speed the bullet hits the wood at and $m_B$ and $m_W$ the masses of bullet and wood-block, respectively.

Now if by "how far does the bullet travel in the wood" you mean how high does the wood pendulum rise after impact, you should now be able to calculate this by conservation of energy. Note that, with the assumption of negligible motion of the wood during impact, the final speed is independent of the wood's materials and the same amount of energy, to wit:

is lost to heat / sound and so forth regardless of the wood's properties, so you do not need to know how much loss there is. You can calculate the loss.

But to answer the question the question "how deeply does the bullet embed itself into the wood" you need a great deal more information, as explained in Mongelo's answer.

We can "sketch" the unknown information below by sketching the bullet's speed as a function of time: 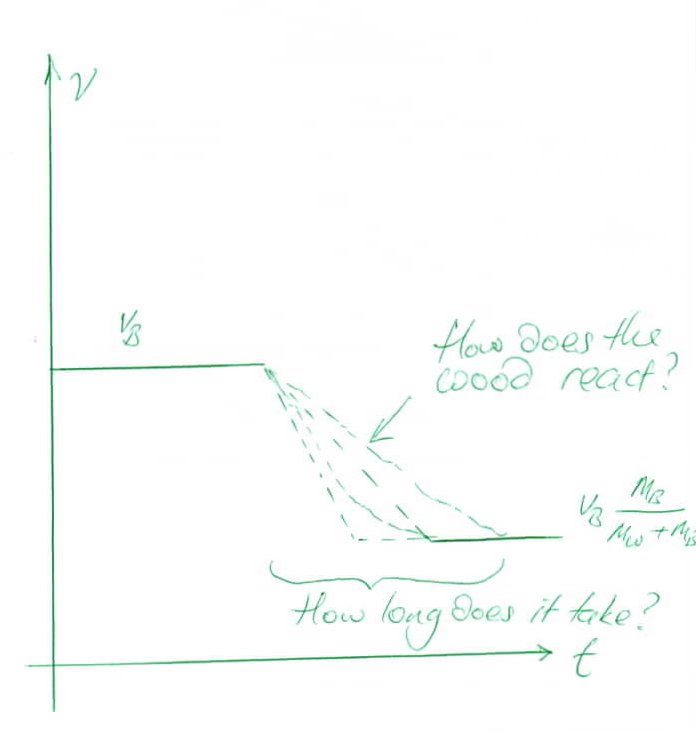 We know the bullet's initial and final speed. We simply don't know how it transitions between them, and this latter knowledge depends on how hard the wood pushes back as it is deformed: it depends on the deformation properties of the wood, and bullet. The latter will be crushed and will tend to expand as it slows through the huge deformation stresses imposed on it. The transition defines the gradient of the v-t diagram, which, through Newton II, defines the force as a function of time on the bullet, which in turn, through Newton III defines the force on the wood block. But there are so many variables: deformation properties of wood, deformation properties of the bullet and evolving shape of bullet, that this kind of information would only be available experimentally through high speed photography. A simpler situation which illustrates these points is that you could replace wood with a bucket of water, assume the bullet's shape did not change and then a ram pressure model would be a reasonable model. Here the backthrust on the bullet varies like $\frac{1}{2}\,C\,\rho\,v^2$, where $\rho$ is the fluid density and $C$ the drag co-efficient which depends on the bullet's shape, so that one can write a differential equation for the bullets's motion. You can see, therefore, at the very least, the deceleration depends on the bullet's shape and fluid density.

An aside, I nearly fell off my chair in shock at the putative bullet mass, but, apparently, it's not too outlandish.

5
Veritasium - Firing bullet in block - along center and away from center
0
Show that the initial speed of the block and the bullet, after they began to move off together, was 1.3 m/s
0
Mechanics Question - Bullet fired into Block
1
Flight time of spherical bullet fired horizontally versus dropped vertically / effect of crosswind on spherical car
1
Why are we applying conservation of momentum in the following question?