With respect to the propagation of a short laser pulse in despersive media, we can see that the pulse gets broader in time domain, while the pulse stays constant in frequency domain. 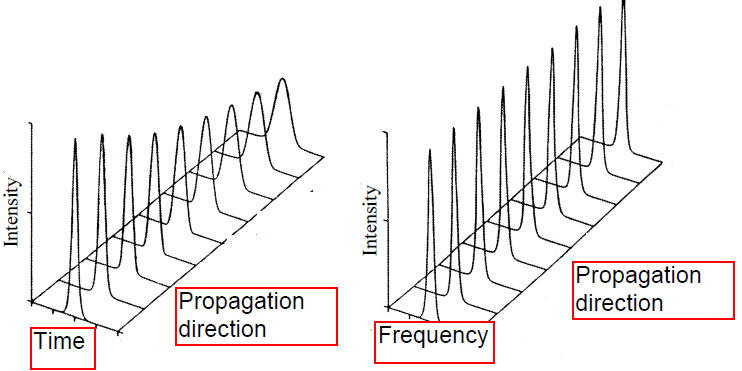 How is it now possible that both domains contain the same kind of information? I mean, how is the broadening in the time domain contained/encoded within the frequency domain?

I think the central issue here is that you're forgetting that the Fourier transform is in general complex, and the broadening in the time domain corresponds to the addition of phase with a nonlinear dependence on FT variable in the Fourier-transformed domain.

This is your own, most excellent and succinct answer to your own question, "How is it now possible that both domains contain the same kind of information?". The information of a communication or message is knowledge sent that the receiver does not already know. The Fourier transform is a bijective (indeed unitary with respect to the $\mathbf{L}^2$ norm) automorphism on the class of Tempered Distributions, so a tempered distribution (practically, this means anything you're likely to come across in physics including Dirac Deltas and plane waves) wholly defines its Fourier transform (which is also a tempered distribution) and contrariwise. Put simply, there's nothing more you need to know about the function to derive it from its FT and contariwise.

The encoding of knowledge about pulse broadening by dispersion: that is a separate issue. That is knowledge about a particular physical process acting on the signal, or, mathematically, it is knowledge about the mapping imparted to the input signal to transform the input to the output. It is the mathematical description of the "black box" we use to model the dispersive process. Both input and output are equally well, separately described either as time-domain functions or their respective Fourier transforms. The mapping that transforms input to output is a description, knowledge, information further to the descriptions of the input and output. it's not wholly independent knowledge, because if you know input and the mapping, the output is defined. In the time domain, the mapping broadens the pulse; in the frequency domain it adds phase with a quadratic (or higher order) dependence on the Fourier transform variable.

Not the answer you're looking for? Browse other questions tagged laser frequency fourier-transform dispersion or ask your own question.