One of the problems of illustrating a wave is that the displacement of the particle $y$ is a function of two variables the equilibrium position of the particle $x$ relative to some origin and time $t$.
So to graph a wave one might draw. 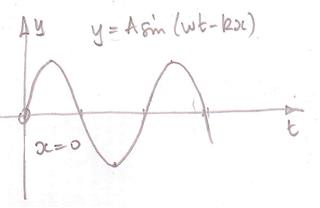 The graph above shows the motion of a particle as a function of time at a fixed position, $x=0$ in this case.

If one now adds the graph of displacement against time for a particle at $x = \Delta x$, ie at an equilibrium position further away from the origin in the positive direction. 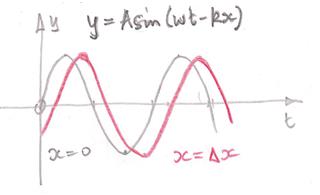 What one notes from these two graphs is that the red graph lags behind the grey graph.
This means that the wave is travelling in the positive x-direction.
You can think of it as the particle at $x=0$ telling the particle at $x = \Delta x$ what to do but that information is delayed because the information (wave) travels at a finite speed.

With $\omega t$ and $kx$ reversed you will see that it is still a wave travelling in the positive x-direction but $\pi$ out of phase with the other one. 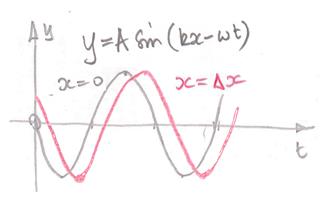 If you look at my attempted representation of the 3D graph you are essentially looking at a series of sections of the graph which are parallel to the $y-t$ plane ie looking left from the right hand side.

The other wave of representing a wave is to draw a wave profile which is essentially an instantaneous photograph of the wave. 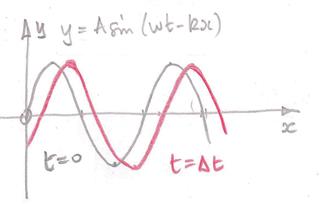 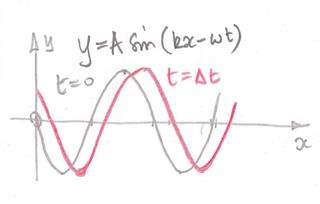 Both the graphs illustrate quite clearly that the waves are travelling in the positive x-direction.

If you look at my attempted representation of the 3D graph you are essentially looking at a series of sections of the graph which are parallel to the $y-x$ plane ie looking from the front into the screen.

Both are correct equations for a wave traveling in the $+x$ direction. This can be easily seen from the fact that increasing $t$ requires a corresponding increase in $x$ to keep phase constant. The two expressions only differ by a phase of $\pi$ because $\sin (kx-\omega t) = \sin (\omega t - kx + \pi)$

Not the answer you're looking for? Browse other questions tagged classical-mechanics waves or ask your own question.