Allow me to preface this question by stating that I am not a Big Bang denier.

I am reading the book A Universe from Nothing by Lawrence M. Krauss. In his book, he presents the following card as one piece of evidence for the Big Bang: 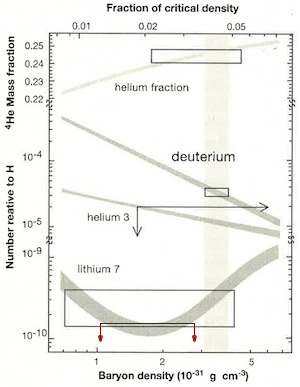 Apparently, the boxes outline the predicted abundance of each element in the universe, whilst the shaded areas represent measured abundances.

This may just be because I'm a (student) mathematician, but this seems like extremely poor and unconvincing evidence on the part of physicists. The only prediction that is convincing is that of deuterium; the other predictions seem to be horribly inaccurate.

As I stated, this is obviously only one of many pieces of evidence for the Big Bang. However, without considering these other pieces of evidence, it seems that physicists regard this specific piece of evidence as being in itself extremely convincing. As such, I wonder what it is that I'm misunderstanding? Am I interpreting this incorrectly? I realise that absolute proofs exist only in mathematics, but these predictions (excluding deuterium) seem surprisingly bad.

Sean Lake commented on what seems to be a graph with much more accurate measurements: http://www.astro.ucla.edu/~wright/BBNS.html.

First, you have it the wrong way around. The boxes show the measurements/estimates of what the initial primordial abundances are. These are measured in various, indirect, ways and are afflicted by both measurement uncertainties and known systematic uncertainties. The height of the boxes represents these uncertainties. This is an old graph. The size of the deuterium and lithium uncertainties have been reduced.

The very convincing evidence that you speak of, is that the shaded regions represent the raw predictions of the "vanilla", homogeneous big bang model as a function of the current density of baryons (which is tens of orders of magnitude less than it was the epoch at which these elements were made).

To me, it is extraordinary that these measured primordial abundances of D, He and Li, which differ by many orders of magnitude and for which we have no a priori expectations, are simultaneously predicted to a good accuracy with a single value of the baryon density (represented by the vertical shaded strip), and that this baryon density (about 4% of the critical density) is itself close to the measured value from the cosmic microwave background, which is entirely independent of the primordial abundances.

Lithium is currently problematic, both to predict and measure, because there are nucleosynthetic uncertainties and it is both created and destroyed in various ways other than primordial nucleosynthesis. The horizontal shaded region in this case represents the lithium abundance that is measured in very old, metal-poor stars (the so-called "Spite plateau"). There are various classes of explanation for this "lithium problem", the most likely of which (in my view) is that these stars have depleted lithium from the higher primordial value. See Discrepancy problem in lithium?

A slightly more modern (post-Planck results) version of this "Schramm plot" is shown below (from Coc et al. 2014). The green shaded boxes represent observational estimates of the primordial abundances (though note what I said above about Li), while the red dotted lines mark the range of uncertainty in the predictions (due to things like the lifetime of the neutron and nuclear reaction cross-sections). The vertical baryon density measurement from the CMB is now very precise. Note the spectacularly good agreement between the predicted and measured D abundance with the measured baryon to photon ratio from the CMB. There are no free parameters tuned to get this agreement. 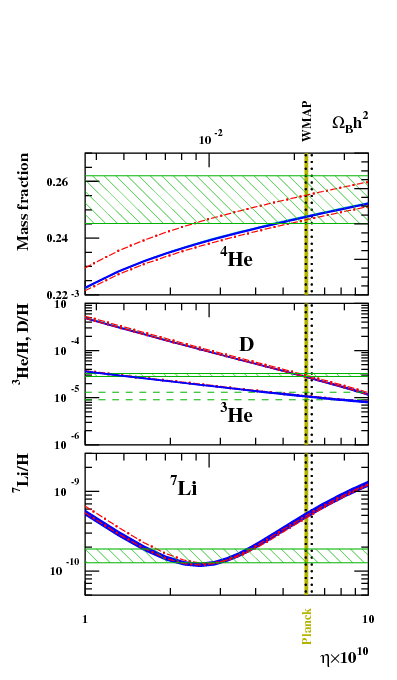 It is the difference between mathematics and physics.

Measurements have an error width, and the boxes represent, usually, the 1 sigma error in the measurement. So the measurements need more accuracy. Nevertheless a physicist considers this as good first order evidence that the model plays in the correct ball park: it agrees with the data within one sigma.

Not the answer you're looking for? Browse other questions tagged particle-physics cosmology popular-science elementary-particles or ask your own question.

8
Big bang and time
16
What is our location relative to the Big Bang?
23
Did spacetime start with the Big bang?
13
What has been proved about the big bang, and what has not?
8
Physical laws prior the big bang (quantum fluctuations)
0
Why is the Big Bang the biggest explosion in the universe?
1
Heavy Ion-collision and Big Bang
1
How was electrical charge formed in the Big Bang?
2
Origin of particles at the Big-Bang