Levitation, no levitation or instable levitation?

(forgive me any grammatical flaws, english is not my native language)

i know that according to Earnshaw's theorem a stable levitation cannot exist by only using permanent magnets.

Similar questions has been already answered (e.g) Can I levitate an object without using an electromagnet? but they don't state what actually would happen and why. 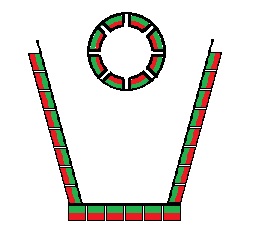 We asume that we have a cup and a sphere. Since a perfect equilibrium cannot exists, what happens actually then?

Beyond that, let's consider an ideal case: a sphere and cup that are both electrically charged with the same sign charge (electric charges interacting with each other would behave the same as magnetic charges interacting with each other). This will result in situation 3. If the ball is heavy enough, it will sink below the lip of the cup. From that point, the vertical electric field gets weaker as you approach the bottom, since more an more of the cup is above the ball, pushing it down. So the ball would fall all the way to the bottom. If the ball is too light, it floats upward from the electric force. Above the cup, the electric fields spread outward, and if the ball is even slightly off-center, it would be pushed away and out of the cup. An exactly-right weight ball would not be stable, as any vertical disturbance would cause the ball to fall into or out of the cup as explained earlier.

Not the answer you're looking for? Browse other questions tagged magnetic-fields levitation or ask your own question.

18
Can I levitate an object without using an electromagnet?