Collision of a black hole & a white hole

A black hole and white hole experience a direct collision.

What happens? What shall be the result of such a collision?

This question has a somewhat faulty premise that a white hole and a black hole (or anything else for that matter) could collide. In fact a white hole is defined as an area of spacetime where nothing could enter from the outside, or, mathematically speaking, it is a maximal extension of a black hole (part of an eternal black hole that wasn't formed via gravitational collapse).

This idea can be best viewed in terms of Kruskal coordinate diagrams, a special sort of spacetime diagram where a coordinate transformation is preformed. This diagrams now have the fun property that null geodesics (basically rays of light) follow paths at 45 degrees from the positive y axis. The "white hole" of the graph below is area IV, and as you can see, not even light from outside of this region could theoretically enter it. In fact, it is defined as the region where no null geodesic could theoretically enter, only as the area where particles can come out of. Therefore, by the very definition of a white hole, a white hole could not collide with a black hole (seen in region II of this diagram). 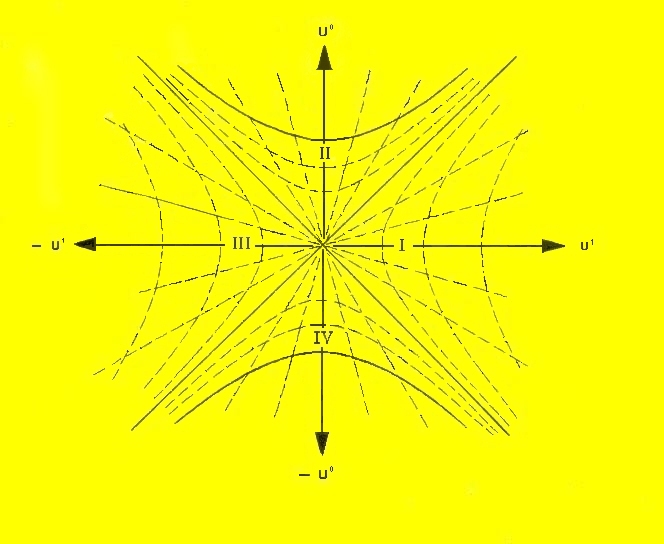 White hole is an impossible object in universe.

Mathematically it is a black hole under inverted time. This can be interpreted as a black hole in an universe where second law of thermodynamics is inverted, that is the entropy always diminishes.

Since second law of thermodynamics has probablistic nature, one can see a white hole as a highly unprobable state of black hole: the state where it consumes high-entropy Hawking radiation and exhales low-entropy objects instead of doing the opposite.

In theories which consider collisions between objects which have opposite arrows of time it is usually derived that upon such collision the object with reverse time arrow will quickly switch its time direction for which only a microscopic perturbation is enough. This means that in a hypothetical universe where there is a black and a white hole, in a short time after their first interaction the white hole will become another black hole so that the system will end up with two black holes.

It should be noted that in the universe which reached termodynamic equilibrium, there is no difference between a black and a white hole, the both behave the same: consume and radiate high-entropy radiation.

A black hole pretty much is the same as a white hole.

Hawking's result proves they're essentially the same object, so the result will be a black hole with a radius larger than the sum of the radius of the black hole and the "white hole".

I'm just an undergraduate so possibly one of the other members can give a more detailed answer.

edit: I implied but did not directly say that due to a white hole being the same as a black hole your question becomes "what is the result of the collision between two black holes" so the answer is what I said above. I put white hole in quotations because it's really just another (possibly smaller or larger) black hole.

In an entirely time symmetric situation, and assuming the universe does not contain any other fields besides the two B&W holes, the only way to determine what is the preferred time direction is by looking which of the two holes have the bigger entropy.

Each hole has an entropy proportional to the square of its mass. if $M_{bh} \gg M_{wh}$, then we can consider the white hole a "temporary fluctuation" in a background of forward-oriented thermodynamic increase (using the convention that black-holes increase their entropy "forward" in time), in the case where $M_{bh} \ll M_{wh}$ is the other way around: The preferred thermodynamic arrow is backward and the black hole is a temporary fluctuation going forward.

Probably white holes, as the opposite of black holes, do not exist. The reason is an unsurpassable singularity from the black hole to the white hole region. The reason why people believed in white holes was because the complete extended solution to the black hole space time was unknown. There was a time when physicist believed that AGN were actually white holes instead of supermassive BHs. I said probably, because this are all theoretical models that, although have supporting evidence, are still speculative. So, in GR there is nothing today that we can call a white hole. Wormholes are not white holes, and are hypothetical objects that violate the strong energy principle in GR. I have learned not to say that something doesn't exist because the accepted theories say so. Maybe white holes do exist in quantum gravity, because this theory may eliminate singularities. At present we don't know. If they do exists, in some theory not yet realized, their collision and or creation with respect to BHs will be a very interesting problem.

Technically you would say that a black hole is a causal region which is not in the past of any point in the external universe. Similarly a white hole must be causally before any point in the external universe. That is a perfect description of the Big Bang. Mathematically a singularity exists inside a black hole, where matter becomes infinitely compressed. I don't believe there is more than one singularity in the universe, however. All black holes are from our viewpoint frozen portions of time and space, and the singularity within all of them is only going to "occur" - in a sense - at the end of the universe. Therefore a black hole could never meet a white hole, except in one sense: as both the singularity at the beginning and end of the universe are both "beyond time" they may well be the same singularity, it would certainly resolve the question of where everything came from! So black holes and the Big Bang are two sides of one coin. In another sense you can't collide them, they are eternally linked to each other.

No,Hawking did not prove a white hole and a black hole are one of the same nor could he or anybody ever do . We can only prove the existence of what we can make actual observations of, but i will give a challenge to who is willing to accept, a gravitational field in of space-time itself nothing! escapes a black hole if anybody believes the universe is finite then explain me why it is expanding rather than contracting.?

As I can only think of very complicated scenarios which none of which make much sense. But i don't believe the universe to be finite, the universe is full of weird contradiction even at the most fundamental level this is why many scientists are beginning to think the universe is holographic. If that being the case we can't really say what created the projector because our brains cannot outgrow the confines of the computers program. But i personally don't believe this scenario even though its much more logical than a fairy waving a wound and saying let there be light.

Not the answer you're looking for? Browse other questions tagged general-relativity black-holes collision white-holes or ask your own question.