The potential for a first order phase transition is shown below

I think the most accurate answer is that we probably do not know. I wrote the following paper which looked at inflationary cosmology as a quantum critical version of Landau's tri-critical point. If this is right, or some variant similar to this is right, the tri-critical point falls below the valued of the Landau parameter for type-II phase transitions. The would tend to make sense with the generation of matter and radiation at reheating. That is an abrupt transition with a latent heat that is more of a type-I phase transition.

I will just address the question from mean-field theory with weak fluctuations, which is I think the only regime where the bubble-nucleation picture makes sense.

Below you see a picture of a Landau-Ginzburg potential (taken from Cardy's book "Scaling and Renormalization in Statistical Physics", which I highly recommend) for a continuous phase transition. Note that the symmetric minimum at the origin and the two symmetry-breaking minima never co-exist, so there is no way to draw the diagram like in the question. So I would say bubble-nucleation requires a first-order transition.

On the other hand, in the ordered phase we have two different minima, and in a low temperature state there are typically ``domains" of either one with some domain walls between them. The two domains are equally favorable, so they don't spontaneously nucleate, but if we explicitly, we can tilt the scales and cause one domain to have slightly lower energy (eg. by applying a magnetic field to a ferromagnet) and then we will have spontaneous nucleation of domains sitting in the lower of the two minima.

Something else you might look into in the setting of self-organized criticality is avalanches, which are a bit like bubble nucleation. They happen when part of a system relaxes from a supercritical to a subcritical state near a continuous phase transition. Their sizes reflect the scaling behavior of the critical point. Here is a starting place. 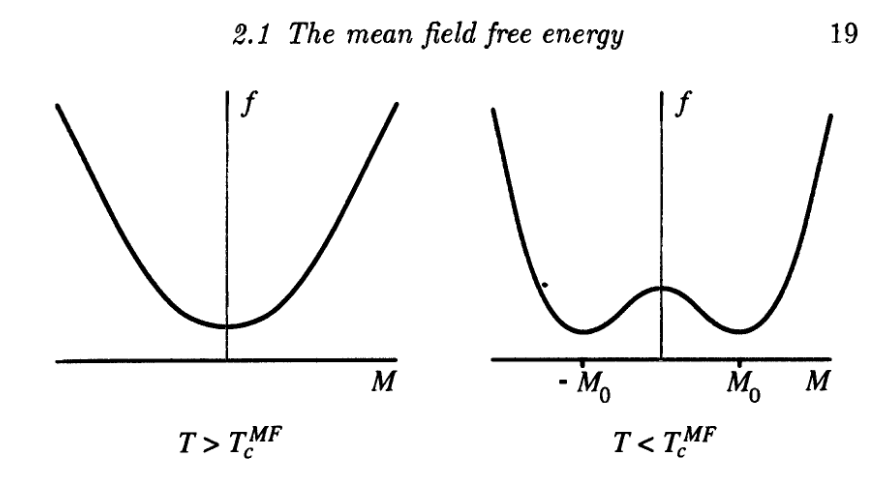 4
Ising Ferromagnet: Spontaneous symmetry breaking or not?
12
Is there a phase transition between a gas and plasma?
1
If a false vacuum decays in the universe, would it necessarily create an inflating bubble?
1
Can our universe be a true vacuum bubble?
5
First-order phase transitions as branch cuts