Can an accelerated timelike trajectory reach the boundary of AdS space in finite time? 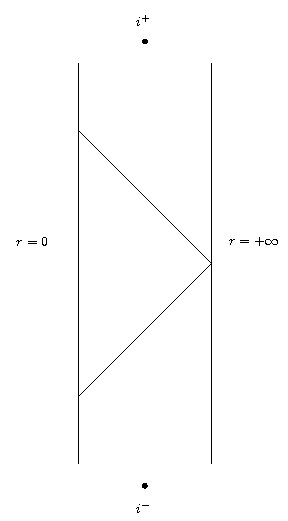 (ignore the two dots labeled $i^+$ and $i^-$; I just grabbed this picture off the web). The asymptotic (or conformal) boundary of AdS is the vertical line marked $r = \infty$ (the line $r = 0$ is just one possible choice of origin), and the line moving at 45$^\circ$ is a light ray (shown here reaching the boundary and then bouncing back in). With this picture, it's clear that we can draw a timelike trajectory (that is, a line whose angle with the vertical is always less than 45$^\circ$) to and from the conformal boundary, so indeed, there do exist timelike curves that do reach asymptotic infinity.

Edit: As Peter pointed out in a comment, a statement I made regarding proper time in my previous answer was slightly wrong. I believe the correct statement is that any timelike curve that reaches the asymptotic boundary must either do so in infinite proper time (e.g. a uniformly accelerated observer can eventually reach the boundary, but takes an infinite proper time to get there) or have divergent geodesic acceleration there (e.g. a timelike curve can get "close enough" to being null that it reaches the boundary in finite proper time, but it takes an infinitely large acceleration to do so). The physical interpretation, of course, is that no finitely-accelerated observer can reach the asymptotic boundary of AdS in finite proper time.

Not the answer you're looking for? Browse other questions tagged general-relativity anti-de-sitter-spacetime or ask your own question.