Why are the windows of bridges of ships always inclined? 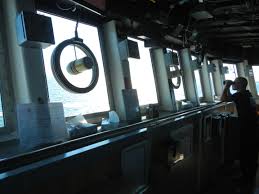 What is the reason that the windows of ships' bridges are always inclined as shown in the above picture?

This answer was accepted, but CandiedOrange has the right answer. See this document page 21:

The second way in which reflection can interfer e with controller’s vision is light sources within the cab (or direct sunlight that enters the cab), which can cause disturbing reflections during either day or night operations. The effects of these reflections can be a loss of contrast of the image being viewed, a masking effect of a competing image, or glare. The two ways to mitigate these effects are to reduce the reflection coefficient or to design the ATCT cab to reduce or eliminate the probability that any light source (artificial or natural, direct or indirect) can produce a reflection in the pathway of a controller’s view out of the cab windows.

It controls glare. Whenever the sun hits a window, it reflects off of it. If the windows are vertical, its pretty hard to control where that glint could go. When the sun is near the horizon, it could even be seen by other ships, but at the very least it can blind workers on your own ship.

Angling them doesn't prevent this from happening entirely, but it does substantially limit the places on the ship which can be hit by this glint to a small region around the bridge itself.

This requirement appears in specifications such as these regulations from the UK:

1.9 Windows shall meet the following requirements:

1.9.1 To help avoid reflections, the bridge front windows shall be inclined from the vertical plane top out, at an angle of not less than 10° and not more than 25°.

These same rules are also applied to air traffic control towers at airports: 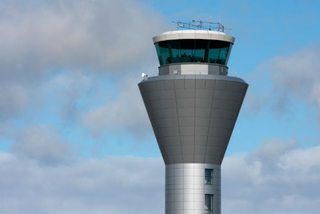 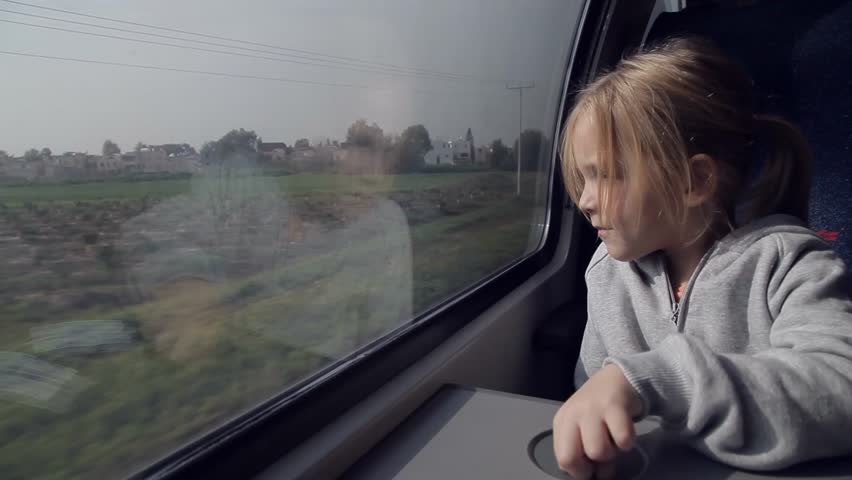 We tend to ignore our own reflection because we can focus our eyes on the distant horizon, which blurs the reflection, but that doesn't mean the reflection isn't still causing visual noise, making it hard to see.

As if that wasn't reason enough: 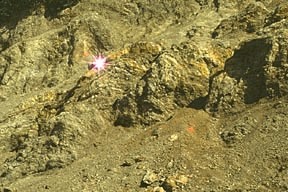 Pick up a pair of binoculars with curved lenses that glint in the sun from almost any angle (ask a sniper) and look out of a vertical window while the sun shines in and you'll see why they insist on tilting the windows.

The tilt also keeps the lights inside from showing up in the reflection, as long as you didn't install lights in the ceiling. You'll notice that this ships bridge has a nice dark ceiling with no lights. That's no accident.

To help avoid reflections, the bridge front windows shall be inclined from the vertical plane top out, at an angle of not less than 10° and not more than 25°.

says nothing about why doing this avoids reflections. It just says that it does.

The fairly wide 10° to 25° allowance can be explained as simply dictating how close you can stand next to the window and not see your forehead reflecting at the horizon. When spotting a craft miles away, stepping a few feet back isn't going to matter.

And the circular things in two windows - are spin windows, (several brands out there) that are spun when it is raining or there is any buildup (snow, ice) on the bridge windows. All the muck flies off and you can see an extra few feet! Other windows have windscreen wipers, but they can freeze, and in heavy rain just are not that effective. On the tilting - in addition to reduction of reflection, the other reasons also add to their use - easier visibility of the deck, shading of the glass (and the bridge) at lower sun angles and they seem to stay somewhat clearer when raining than the verticals. :-)

4
Why do polarized sunglasses remove (most) reflections on car windows?
95
Why are radiators always placed under windows?
8
Is manufacturing roughness really the only reason we don't see optical interference in thick dielectrics like windows?
1
Why are mediums always represented as straight and parallel lines in Ray optics?
1
Why do doors and windows automatically open during windy season?
2
Reason for halo-like rings created by light source