Reading this answer I wondered if during an electron-electron interaction real photons have to be emitted. Since the interaction of two electrons is accompanied by the change of direction and velocity it takes place an acceleration and every acceleration of electrons is accompanied by the emission of photons (and slowdown of the electrons). On the other side I've never seen a Feynman diagram with e-e interaction and real photon emission.

Will an electron gas cool down, not taking in account the interaction with the boundary walls?

Here is the Feynman diagram, it is the Brehmstrahlung one for an electron in the field of another electron. One should add the symmetric one to find the total amplitude at this order. 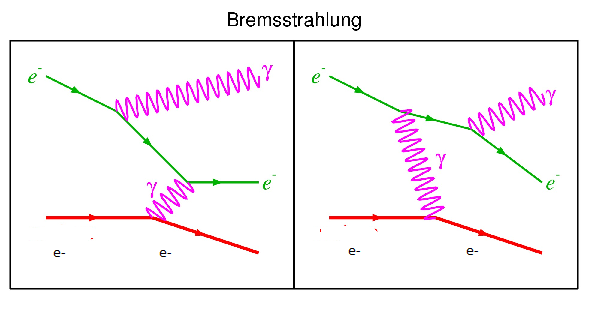 Yes, electrons scattering off electrons will radiate as in the diagram, with smaller probability by 1/137 at least, due to the extra electromagnetic vertex, and the gas will slowly cool.

Reading this answer I wondered if during an electron-electron interaction real photons have to be emitted.

They don't. The virtual photons of the electromagnetic interaction are virtual. They aren't short-lived real particles that pop in and out of existence like magic. See anna's answer here. Virtual particle only exist in the mathematics of he model.

On the other side I've never seen a Feynman diagram with e-e interaction and real photon emission.

You have in the guise of electron-positron annihilation. There is also cyclotron radiation. I imagine you could contrive that with just electrons.

Will an electron gas cool down, not taking in account the interaction with the boundary walls?

Maybe, see above. It depends. But if you simplify it to one electron in vacuum, it won't slow down unless it interacts with something else.

Not the answer you're looking for? Browse other questions tagged electromagnetic-radiation quantum-electrodynamics feynman-diagrams or ask your own question.

42
Do virtual particles actually physically exist?
2
Is anything exchanged in the occurence of an electric field

2
Feynman rules for real scalar field interacting with electromagnetic field
4
how is an electron able to emit and absorb the same (virtual) photon?
7
Why does an electron react differently to a virtual photon in the interaction between two electrons and between an electron and a positron?
4
Electron interaction with the field vs. wave
6
Are photons emitted by a magnet?
0
Feynman diagram and bosons
1
What happens to an electron when it radiates a photon?