Stress in a cylinder with no internal pressure

I was trying to solve the following question regarding the circumferential tension on a cylindrical vessel having liquid filled in it.

A cylindrical vessel of height $H$ and radius $R$ contains liquid of density $\rho$. Determine the circumferential tension at a height $h$; also determine it maximum and minimum values.

So my line of thought was that what would have been the case when there was no liquid filled inside it, would there still be any kind of circumferential tension. So, what I want to ask here is that is there any kind of manufacturing stress present in the cylinder due to its curved shape. This has me stuck for quite some time. I cant seem to find anything on the web too.

Also, I tried attempting the question as follows:-

Consider a differential ring of height $dh$ situated a depth of $h$ as shown below:- 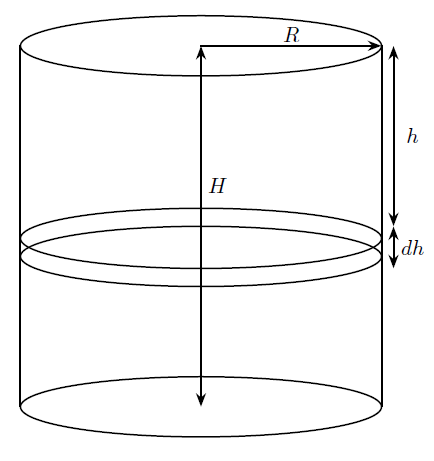 Now, here is the part where I am having a doubt as to how to determine the tension that acts on the differential cylindrical element due to the expansion that occurs due to the pressure exerted by the liquid. I was confused b/w two cases:-

But with case-2, the forces that start acting on the circumference are as shown in the diagram below:- 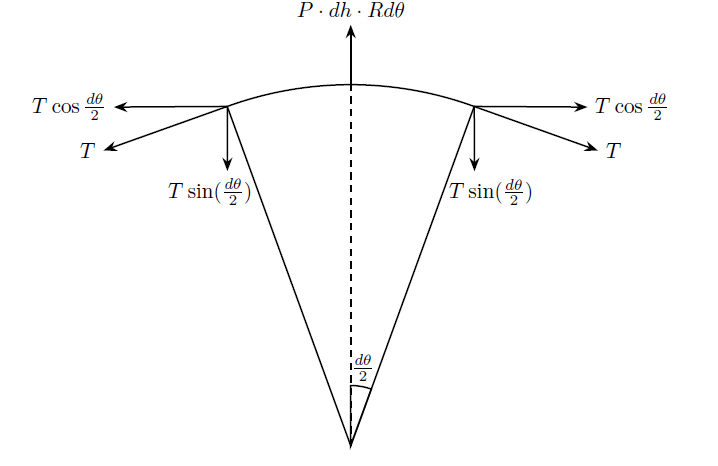 After all the changes that can occur in the dimensions of the cylinder has occurred there will be static equilibrium, hence we get:-

So, it seems that the circumferential tension depends on the differential height. That seems weird.

Also, doesn't the cylinder should have some thickness or else when it expands it will break immediately. Do correct me if my reasoning is wrong.

As Sammy gerbil told that it looks like this is a " check my work" kind of post so let me clarify what my doubts are if you aren't willing to read through the whole post which certainly does point out what my doubts are at each point of solving my question.

Your first figure does not correctly illustrate what circumferential stress is. To calculate circumferential stress you must take a vertical plane section passing through axis of cylinder, as you have yourself mentioned at the very end (also see this Wikipedia entry). Manufacturing processes can and usually do introduce internal stresses into the fabricated component. Even if you assume that all these internal stresses have relaxed (after long enough time) and the cylinder has returned to equilibrium condition, there will still be stresses due to self weight. Someone good with solid mechanics may be able to help you with how to calculate them. Presence of liquid inside the cylinder introduces additional stresses, and from the problem statement it seems that it is fair to assume that stress due to presence of liquid is much greater than that due to self weight of cylinder, so you may neglect the latter for the purpose of this problem.

In reality cylinder must have a finite thickness, otherwise stress would not be finite.

Not the answer you're looking for? Browse other questions tagged homework-and-exercises stress-strain fluid-statics or ask your own question.

1
Calculating pressure in accelerated fluids in closed and open vessels?
4
Wall stress of a hexagonal pressure vessel
3
How to calculate pressure loss due to water leakage from a hole in a pressurized unit
0
How to find the force due to fluid pressure over a surface?
0
Force on the base of a container
0
Water column's pressure canceling out problem and it's microscopic point of view