How high can a light-beam (or apple) travel when pointed (thrown) out from the event horizon?

I am a bit confused at the idea that information cannot be sent out from behind the event horizon of a black-hole. Consider the following figure: (source This link) 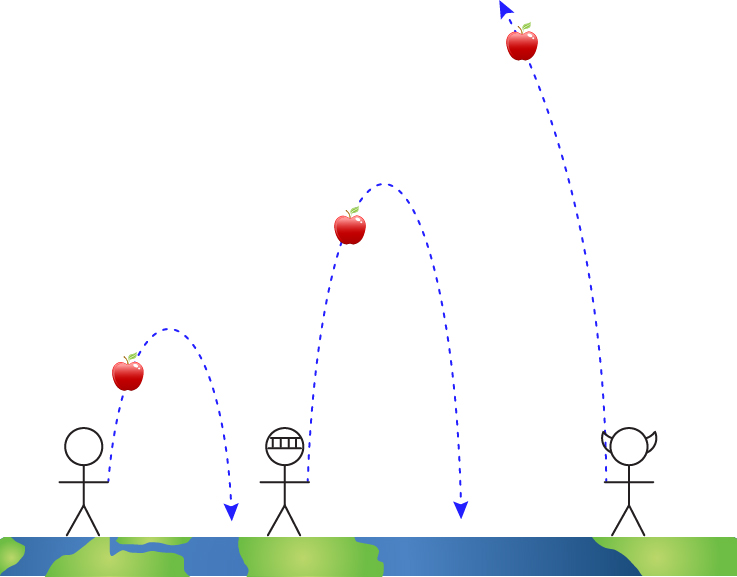 So what if Bob falls into a black hole and throws an apple incredibly fast (or shines a light beam) up towards an orbiting spaceship, just as he crosses the event horizon, is it not conceivable that Alice in the spaceship can catch the apple (or the beam)?

Since the escape velocity at the event horizon is that of light, it only implies that for any object to go infinitely far it must be moving at the speed of light. This does not imply that an object thrown slower cannot move up a finite distance before falling back.

Therefore, would not an apple thrown fast enough be able to reach an astronaut orbiting the black-hole from a safe distance?

Light emitted and directed outwards right inside the horizon will fall in towards the singularity and will never get any closer to the horizon. The reason is, simplistically, that the horizon is a so called lightlike surface, if there were any light in it it could only be going around in the horizon.

Light at the horizon, if there was any, does not escape.

Right above the horizon it could escape, but not once it touches the horizon.

One good way to see this is to look at the spacetime for a Black Hole is what are called Kruskal Szekeres coordinates. They are a coordinate system where light rays are drawn always at 45 degrees, like you would in Minkowski spacetime. The horizon is then drawn as a 45 degree line, and Anya light Ray inside goes parallel to the horizon till it hits the singularity. You can google that. Those kinds of diagrams are called Penrose diagrams and are used to explain and understand the causal structure of spacetime. Like in Special Relativity, anything inside the light cones can be reached, i.e., (consider here a cone opening upwards, with time increasing upwards, in the y direction, and one space dimension being the x direction) the apex and any point inside the cone can be reached via a timelike path. Anything outside can't, would require you to travel faster than light. This anything outside is not causally related to the event at the apex

Not the answer you're looking for? Browse other questions tagged gravity black-holes speed-of-light event-horizon causality or ask your own question.

4
If you shoot a light beam behind the event horizon of a black hole, what happens to the light?