How can we 'see'/measure/detect particles during experiments?

I often read (high-level, conceptual) articles and news on the advances of particle physics. In these, statements are made along the lines of 'particle X splits into particles Y and Z which exist for about a billionth of a second and then decay, ...'.

What I am wondering is how an experimental physicist sees or deduces (I realise the particles are not observed directly) what happens? What does the fundamental data he investigates and bases his conclusions on actually look like and how is it obtained?

This answer is to be read in parallel with the one by Gnorkx.

This is one of the most recent particle detectors, CMS: 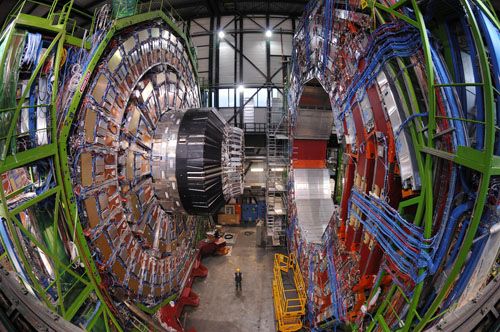 Note how tiny is the man on the floor.

CMS is a particle detector that is designed to see a wide range of particles and phenomena produced in high-energy collisions in the LHC. Like a cylindrical onion, different layers of detectors measure the different particles, and use this key data to build up a picture of events at the heart of the collision.

Here is an event from this detector after the processing discussed in the other answer: 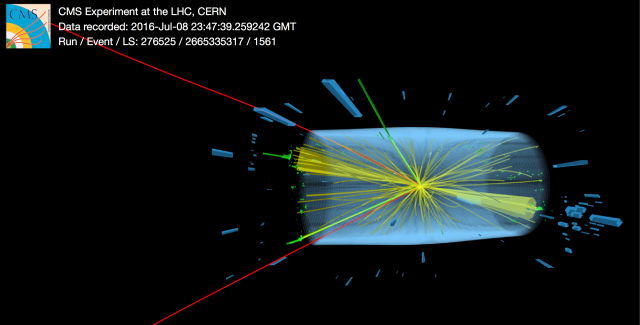 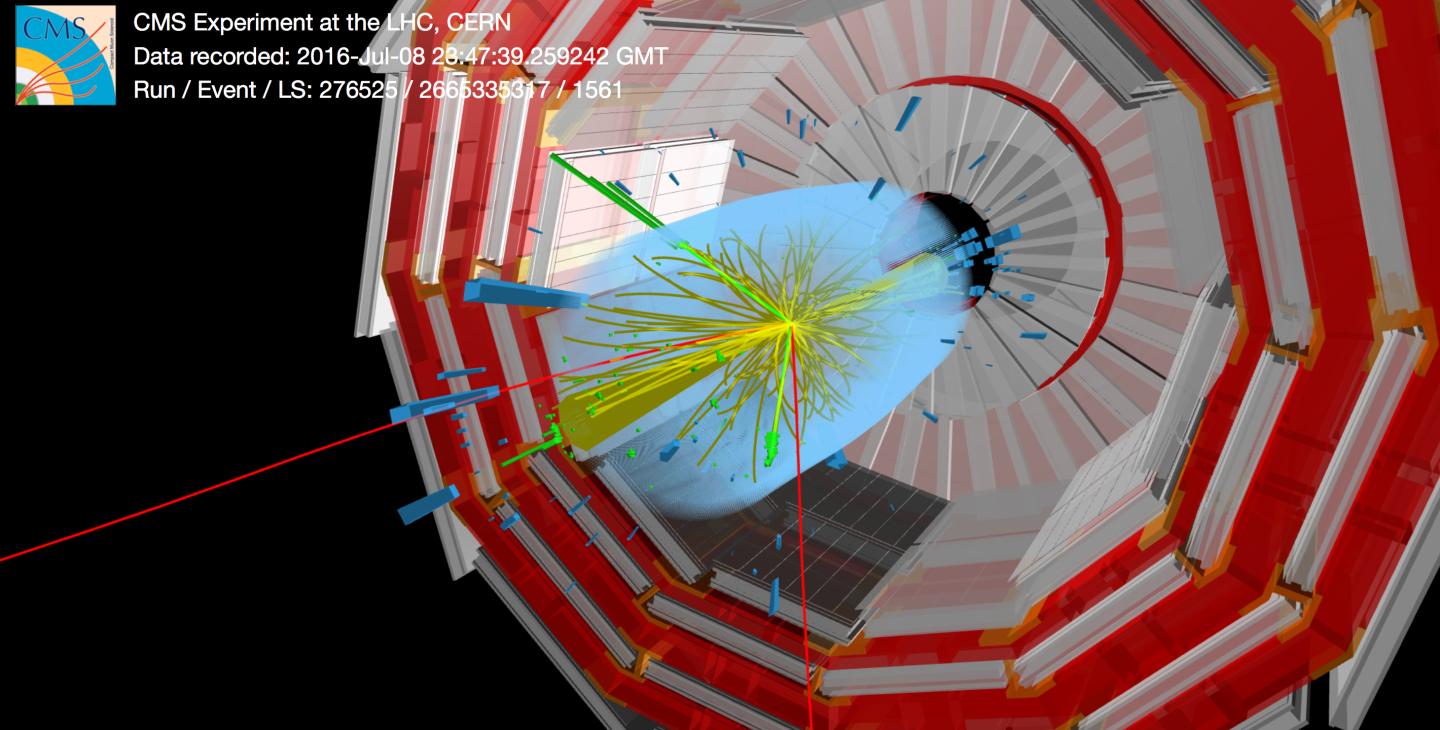 Here is a blog entry of a tour of the cavern and the detector.

In short: The Physicists analyse the final particles in the decay chain and derive from them the properties of the interesting particles.

More detailed: The particle detectors consist of various sub-detectors that measure different quantities, like the path of charged particle ("tracking"), flight-time, energy loss and total energy. From these quantities, particle candidates are created. That means, algorithms try to estimate the mass of the particle that caused a track. That can be done by combining all the previously mentioned quantities (and some more).

After that, one has a list of the detected final state particles, their momentum, energy and mass. Depending on the experiment, they can distinguish electrons, muons, charged pions, charged Kaons, protons and photons. All other particles need to be reconstructed. For example, a neutral $D$-meson decays into a $K^+ \pi^-$ pair. From energy and momentum conservation you get the energy and momentum of the $D$. The "right" Kaon and pion is found by trying all combinations of Kaons and pions and keep only these combinations that match a certain requirement, eg, the mass of a $D$ wich can be calculated from energy $E$ and momentum $p$ as $m_D = \sqrt{(E_K + E_\pi)^2 - |\vec{p}_K + \vec{p}_\pi|^2}$. This can be repeated several times, going the decay chain backwards until the particle of interest.

Of course there are more advanced techniques, but the that should give you the principles.

disclaimer: I'm not a particle physicist so I might get some of the details about the CMS experiment or particle physics wrong but the detector physics should be ok.

The previous answers have answered well the question of how the footprint of the final detected particles can be used to infer the properties of the initial particles of interest. I'll try to give a bit more information about the process of converting the presence of a particle into a detectable signal which can actually be plotted on a computer screen.

I think one of the most basic examples of particle detection is single photon detection with a photodiode. Take a single photon avalanche diode for example. Abstractly, a single photon hits the semiconductor material and is absorbed to create an excited electron. The electron then travels through the semiconductor (driven by an electric field produced by the diode bias voltage) knocking free other electrons on its way causing a cascading current which gets larger and larger. The experimenter then runs this current through a resistor (transimpedance amplifier) to create a voltage and then measures this voltage with some sort of oscilloscope or voltmeter. Whenever the experimenter sees a spike in the voltage she can infer the presence of a photon at the location of the detector. Here's a little more information on the quantum mechanics of photodetection.

There are a wide range of different types of detectors but the fundamental idea is at the core they utilize some process where the detectable particle* is converted into an electron or a burst of electrons which are then amplified into a detectable current or voltage and then use this voltage to infer the presence of (and sometimes the energy of) the particle of interest. In addition, by placing many such detectors in some spatial pattern you can learn even more information about the detectable particle (such as its trajectory or momentum) by looking at the spatial pattern of detectors which are 'lit up' by the detected particle.

So basically for any 'event' (particle shower from protons colliding) the experimenters raw data is a time trace of the voltage coming from each one of the millions** of single particle detectors that make up the CMS detector. Then in an extremely computationally taxing analysis process all of these signal channels are analyzed and put together into a picture that the experimenters can make sense of and further analyzed to determine what sort of interaction created the particle shower which was detected. In the case of CMS this all takes the work of thousands of scientists and engineers.

*A quick scan of the CMS wiki tells me there are detectors for electrons, muons, photons hadrons (protons, neutrons, kaons, pions) for example.

**Woah I just learned how many detectors or 'pixels' make up the detector, that's a lot!

18
What are the main algorithms the LHC particle detectors use to reconstruct decay pathways?
13
How do tracking detectors in particle accelerators create the pretty pictures we see?
1
Observing particles without photons