I am interested to understand what is happening on a wave-form representation of visible light, and what the waveform looks like, when various colors are "added" or "subtracted". For instance, if you say the visible spectrum is a continuous spectrum of a simple sinusoidal (sine wave) waveform, but then shine a red light and a green light on a board, you get yellow light reflecting, but the 2 sinusoidal waveforms have different frequencies so you will get a non-simple sinusoidal waveform reflecting. But you assumed the color spectrum was a continuous variation in simple sine-wave frequency, so how is this possible?

Light obeys something known as the superposition principle - that is, shining the red and green light together gives a combined waveform that is a simple sum of the two waveforms. 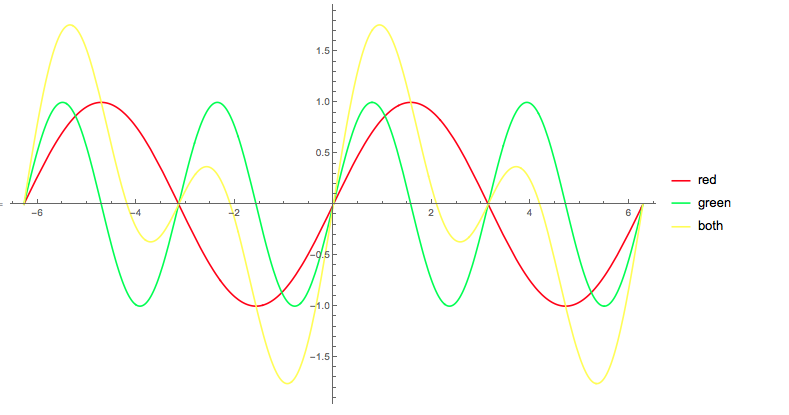 It turns out that there are infinitely many waveforms capable of being seen as 'yellow' due to the way that humans perceive light. You've probably heard that humans have red, green, and blue receptors - they are actually stimulated at all visible wavelengths, but have varying response strengths to different wavelengths:

To get the impression of 'yellow,' the brain thinks "I need a roughly equal 'red' and 'green' signal from the retina" – this can come from either monochromatic 575nm light, or a mixture of 545nm and 605nm light. These are two very different waveforms, but they are both seen as yellow light!

When red and green light both shine on a board, they don't actually make yellow light! Our eyes only interpret that mixture the same way as yellow. To understand how this works, see this picture of absorption spectra of our cones.

Not the answer you're looking for? Browse other questions tagged visible-light frequency or ask your own question.

7
Why do we see brown light?
3
Mechanism for visible light frequency mixing in storm clouds
3
visible light spectrum
4
Why does an yellow object absorb blue instead of all colors other than yellow?
2
Is there such a material that only emits, or "sends out" the same color light that was "taken in" (absorbed)?
78
Why can we distinguish different pitches in a chord but not different hues of light?
0
Color reflection depending on its spectrum