But I am also getting this diagram, see attachment 'dia 2' 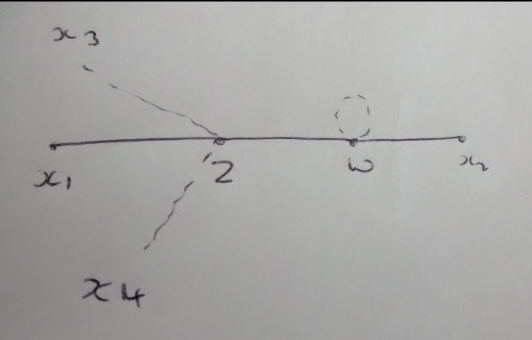 Is there a reason this should be excluded? I know that 'bubble/vacuum' diagrams are excluded - disconnected diagrams with no connection to external points, but I'm unsure here since it's connected...

On another note, my lecture notes describe the contribution from the $g^{0}$ term as 'trivial' since it describes non-interacting particles. so yes in this case it's $x_1, x_2$ and $x_3, x_4$ contracted since you can not contract different fields, however, what is meant by 'trivial' in this sense? Because I know that diagrams that have no connections to external points are not included since they are vacuum contributions and will just cancel out anyway, however here it is a diagram solely between external points, so whilst it doesn't describe any interaction, it still needs to be included right?

Without knowing the text you are referencing, it's possible that they are only considering amputated diagrams, since the third diagram is a self-energy correction to the 4-point contact diagram. If you consider amputated diagrams, you only look at the diagrams close to the interaction vertex, and you effectively discard the self energy contribution, since it could happen arbitrarily far in the future of particle $x_2$ and not around the interaction point.

Un-amputated diagrams contribute to the correlation function, however once you feed the correlation functions into the LSZ theorem the external leg corrections become (mostly) irrelevant. Only the location of their one-particle poles, and the residues at these poles matters and is taken into account in the LSZ theorem by using the physical pole mass and subtracting through the residues.

To be more precise, since we are taking the limit where external particles go on-shell, that is $p^2=m^2$, it is only important to know how the external leg corrections behave in this limit. If you sum up all the corrections (formally), you get the expression $$\frac{i}{p^2 - m^2 + \Sigma(p^2)}.$$ On-shell renormalization will demand that $\Sigma(m^2)=0$, and thus the resummed external leg correction has a simple pole at $p^2=m^2$ (we're treating $p^2$ as its own complex variable here). When you feed this into the LSZ, you get a calculation that looks like $$\lim_{p^2->m^2}(p^2-m^2)\frac{i}{p^2 - m^2 + \Sigma(p^2)}=i$$ And so you see that the detailed momentum dependency of the eternal leg corrections does not matter to the scattering amplitude. Note however, that when the self-energy diagram is placed on an internal line, its momentum depedency DOES affect the scattering amplitude. This is what leads to vacuum polarization and other quantum corrections to the semi-classical scattering potential.

Not the answer you're looking for? Browse other questions tagged quantum-field-theory feynman-diagrams hamiltonian correlation-functions s-matrix-theory or ask your own question.