The answer to your question comes from Maxwell distribution of speed of the hydrogen molecules. 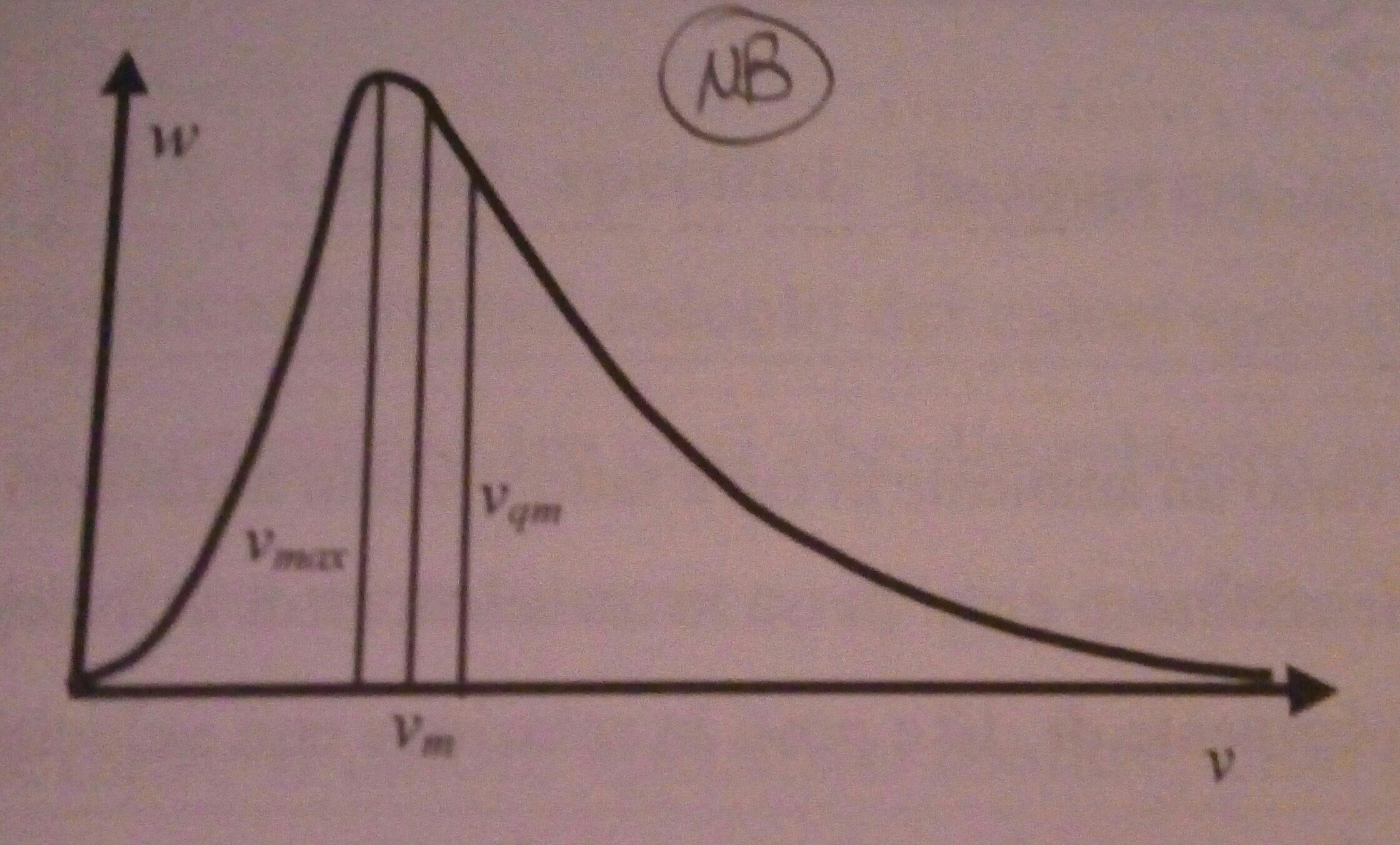 If you take a look at this graph, about the speed of a particle $v$ and the probability of that speed $w$, you can see that there is a non-zero probability that the speed of a certain molecule is greater than the root mean square speed $v_{\mathrm{qm}} $ of that distribution.

By doing this calculation (please let me use other values I have already calculated, at this point it should be easy to apply that formula for every value) at a temperature $T=270\,\mathrm{K}$ and with a mass $m_{H_2} = 2 \cdot 1.67 \times 10^{-27}\,\mathrm{kg}$, we get that the root mean square speed is $v_{\mathrm{qm}}=1830\,\mathrm{m/s}$. On the other hand, the probability that a particle has a speed six times greater than this value (it is approximately the escape velocity of Earth) is $2 \times 10^{-9}$. This value is small, but not negligible; in a long enough time, every molecule of hydrogen will escape from Earth's atmosphere.

For a last example, you can consider the mass of the molecule of oxygen. Its mass is 16 times bigger than the hydrogen molecule and its root mean square speed is 4 times lower and 24 times lower than the escape speed. The probability to get enough speed to escape Earth's atmosphere is approximately $10^{-40}$: really, really small.

This is an intuitive, approximate explanation of why the molecular hydrogen concentration in Earth's atmosphere is really low, while the concentration of other, heavier molecules is higher. There is a difference in the probability, for a certain molecule, to have a speed greater or equal to the escape speed of the Earth. This influences the rate at which these kind of molecule escape the atmosphere and therefore will lead to a different equilibrium (a different concentration) for each molecule.

The equilibrium concentration of hydrogen in the atmosphere is about 0.5 ppmv (parts per million per volume) according to Wolfram Alpha (with a tip of the hat to @AccidentalFourierTransform). This is a result of mechanisms of production, and destruction (chemical reactions, escape). You are right that the RMS velocity of hydrogen is less than the escape velocity - but that doesn't matter.

The thing to keep in mind is that not all molecules have the same velocity. The Maxwell-Boltzmann velocity distribution is of the form

You can plot this for hydrogen and get the following: 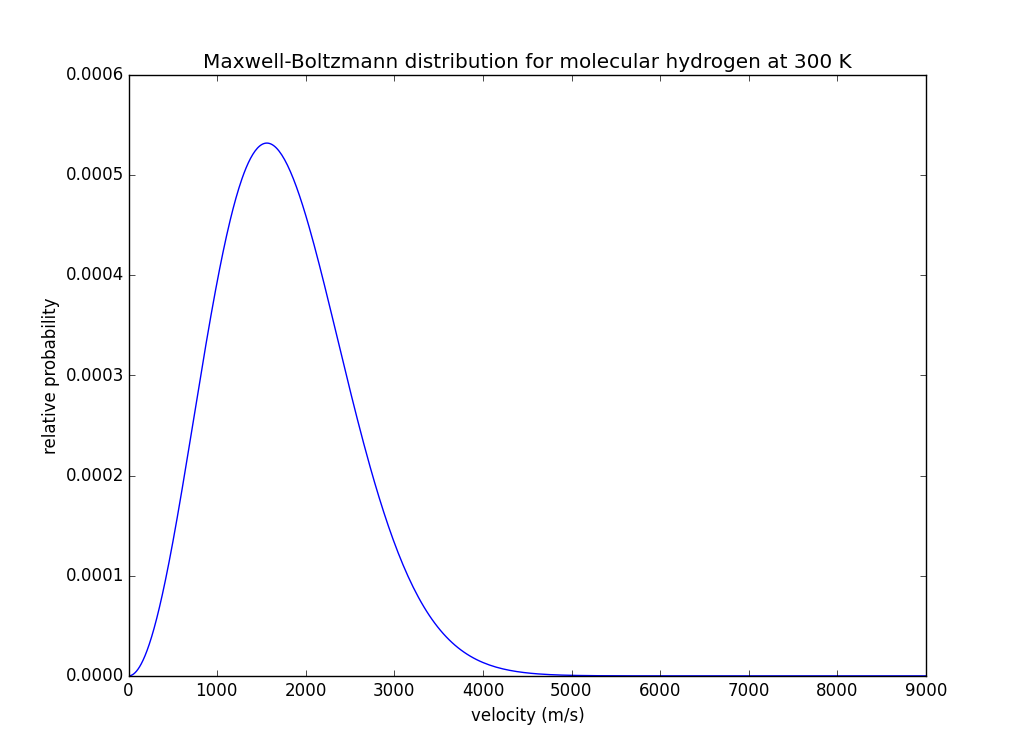 This tells us that there is a small but finite probability of an individual molecule reaching escape velocity. Once that molecule is removed, it won't be coming back, and the velocity distribution will be re-established (because the atmosphere will remain at the same temperature). So there is a slow "leak" of hydrogen from the atmosphere. It is sufficient that that leak be faster than the rate of generation of new hydrogen, for the concentration to drop; eventually, equilibrium is reached.

Because Nitrogen and Oxygen have much heavier molecules, they represent a much larger fraction of the atmosphere. The probability that one of their molecules will reach escape velocity is many orders of magnitude smaller than the probability for hydrogen. Thus, over "geological time", almost all hydrogen disappears from the atmosphere.

Note - if you plot the above on a semilog scale you can see just how small the probability of the high velocities is - and then you remember that the upper atmosphere (above 100 km or so) is actually significantly hotter than the air closer to the surface - under certain conditions, the upper part of the thermosphere can reach temperatures over 2000 C during the day. At that temperature, the probability of hydrogen escaping increases very significantly. This is illustrated in this plot: 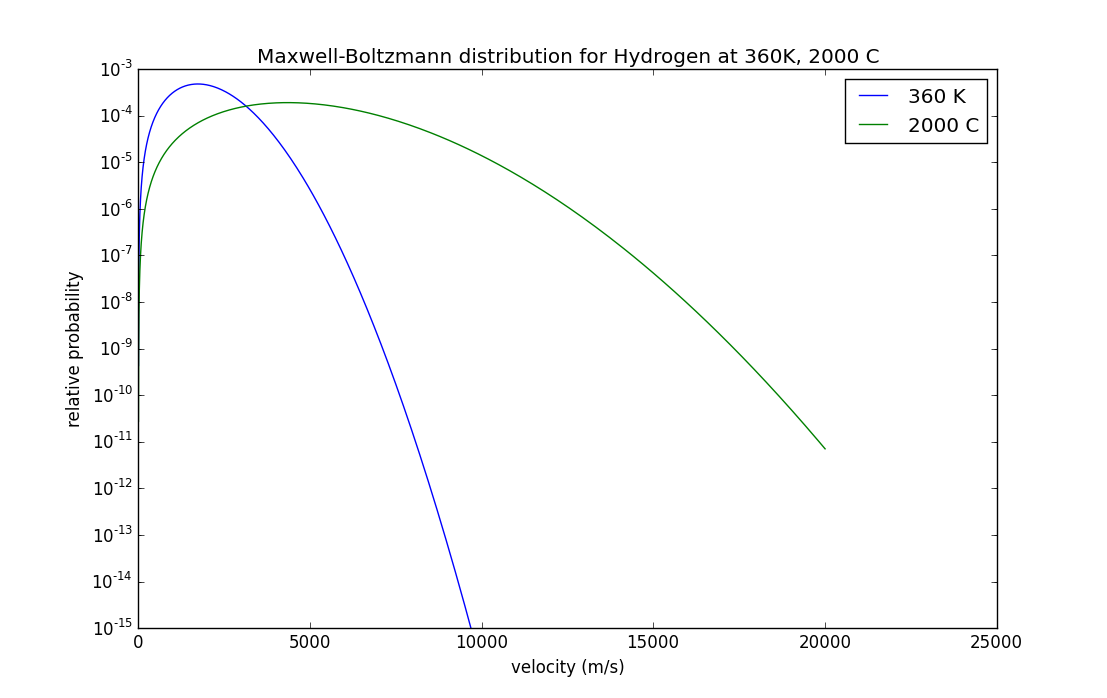 Those hot hydrogen molecules (and atoms) high up in the outermost layers of the atmosphere have a really good chance of escaping...

Final note - unless the mean free path of the molecule is very large, it will undergo another collision and most likely be sent back to earth. This is why only the temperature of the very outermost layers of the atmosphere matter for this calculation.

The other answers are correct in terms of the principal reason that lighter molecules are much more likely to escape the atmosphere. However, it seems that the premise of the question (and perhaps also of some of the answers and comments) is based on an incorrect model of atmospheric escape.

Molecules from most parts of the atmosphere would never escape regardless of velocity.

The picture below is taken from this document (recommended reading) and illustrates that escape is basically only possible for molecules above 500 km (the exosphere). Molecules below that will (most likely) collide with other molecules before escaping. 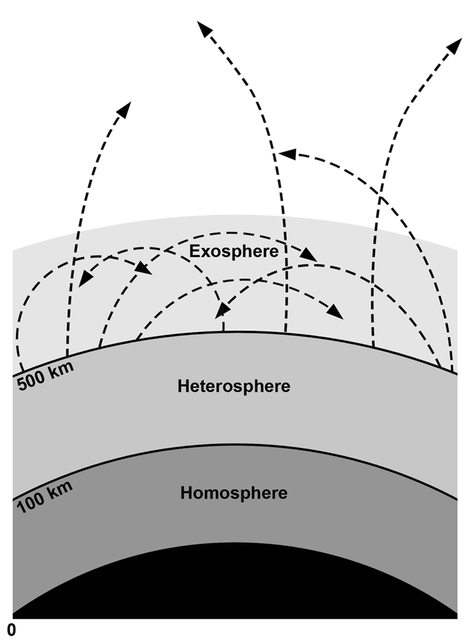 So, what is the atmospheric composition like in the exosphere?

The figure below shows the mixing ratios for the main components between 0 and 1000 km based on data taken from NRLMSISE-00. The exosphere is shaded in grey. As you can see, the most abundant molecules in the exosphere are atomic oxygen, helium and hydrogen. Hence, it is kind of a moot point to discuss escape velocities of molecular hydrogen and oxygen. Of course, the mass ratio happens to be the same since they are both diatomic molecules (but note that a large part of the atomic hydrogen in the exosphere originated from water in the lower atmosphere rather than from molecular hydrogen). 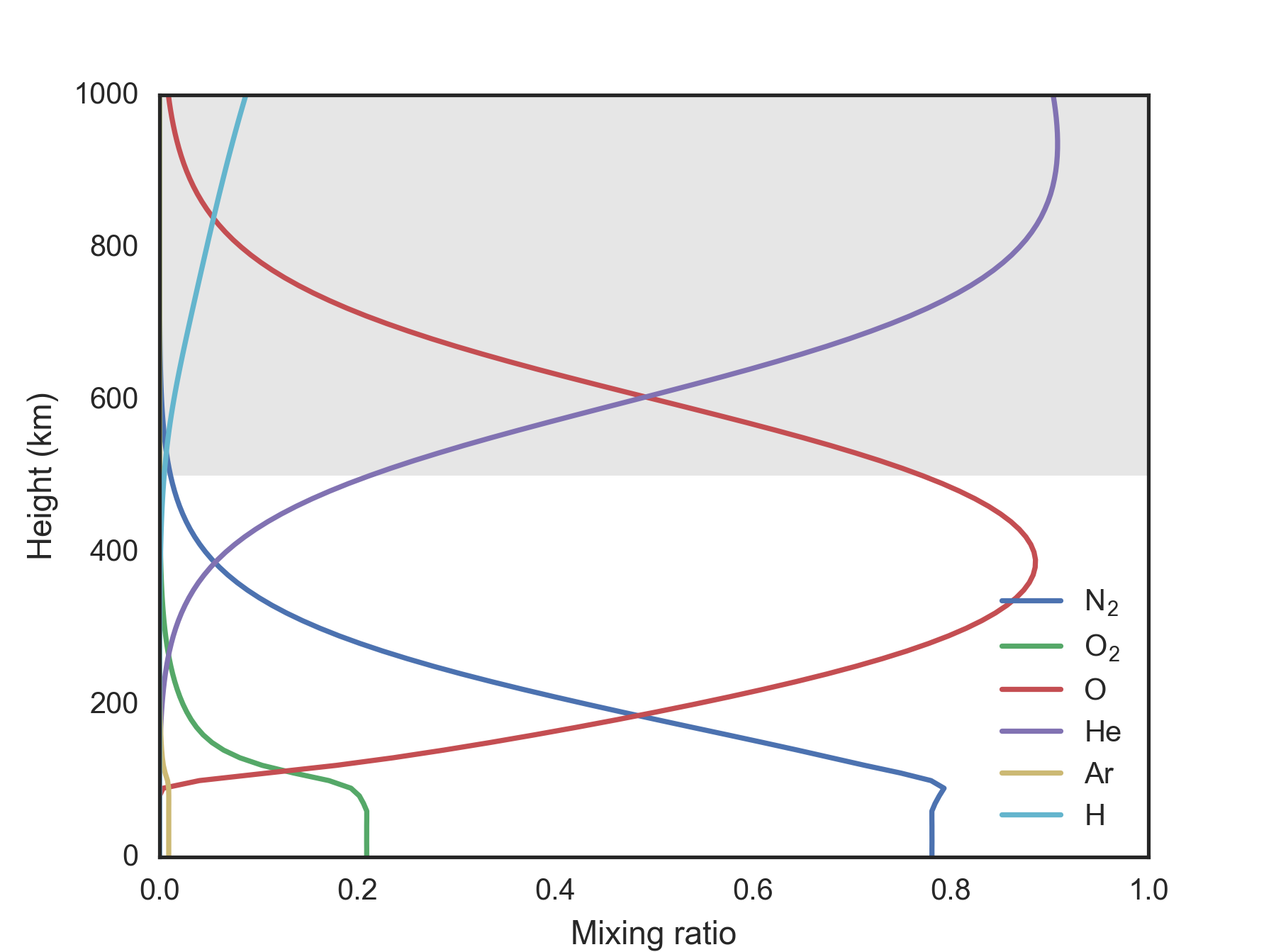 It is also very hot in the exosphere (~1000 K) so making calculations for surface temperatures is also technically wrong (though again, it may happen to give the same qualitative result when comparing two species).

Not the answer you're looking for? Browse other questions tagged thermodynamics gas escape-velocity or ask your own question.

0
Why doesn't earth have a hydrogen atmosphere if hydrogen's thermal velocity is 1.75 km/s - less than 1/6th of earth's escape velocity?
-3
At what temperature will the hydrogen molecules escape from earth's surface?
48
Why is air not sucked off the Earth?
1
How does the Earth have enough gravity to hold on to its atmosphere?

3
Escape velocity for hydrogen molecules
4
Does one square centimenter of the sun core really radiate this amount of energy?
4
More detail on why pressure increases at the bottom of a column of gas
6
What is $R$ in the formula for escape velocity?
2
What is this atmospheric escape chart actually showing?
0
Is there a gas present in the Martian atmosphere similar to hydrogen?