X-ray absorption only at single k-edge

I'm doing a Monte Carlo simulation of a transmission type x-ray tube. A electron beam hits a thin tungsten target, causing X-rays to be emitted. These X-rays then transmit through the target and a beryllium window, hitting the scoring plane. The spectral distribution of these photons in the simulation look like the following: 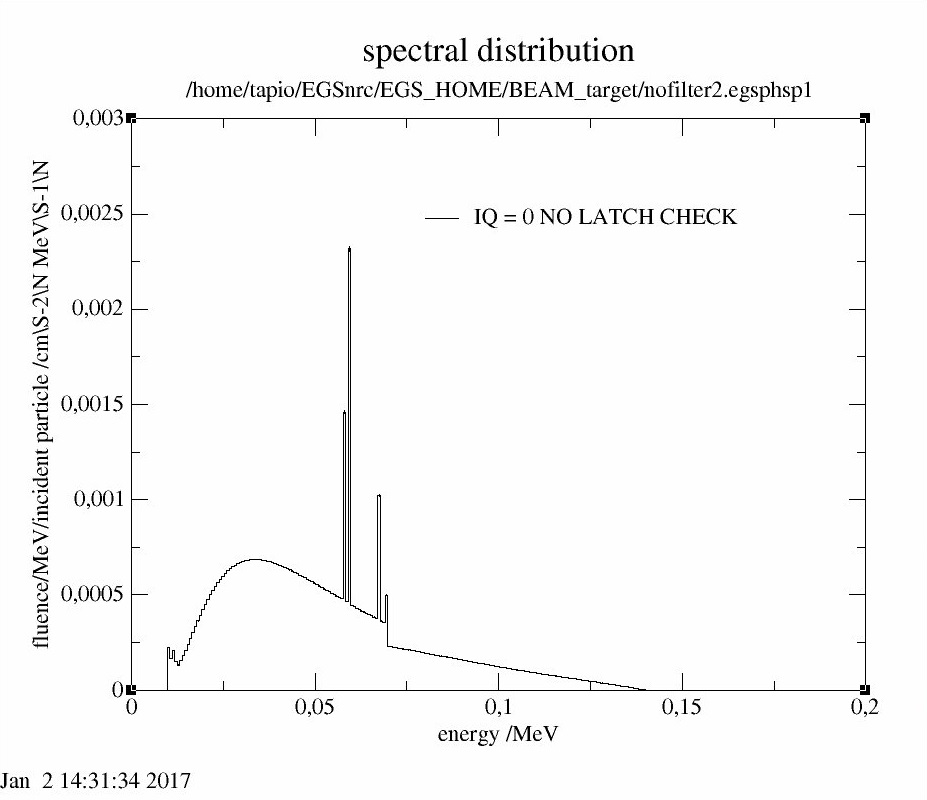 So, both K-$\alpha$ and K-$\beta$ edges are accounted for. The general Bremsstrahlung curve seemed ok, but the attenuation was different than I expected. My knee-jerk reaction was that the simulation had failed in some way as the attenuation changes abruptly at k-$\beta_2$. A look at literature showed me that I was wrong and this is considered normal.

I understand that the attenuation coefficient should go up at the k-edges, as more photons will interact with the medium. What I don't understand is why this only happens at k-$\beta_2$? Why don't the photons interact with the three other k-edges, stepping the spectrum down at each of them? Looking at for example the NIST attenuation dataset for tungsten it's clear that there's only a single leap in attenuation for the four edges at these measurement accuracies. Why?

In order for this to happen an initial process, e.g. electron collision, has to create an empty lower state by promoting an electron to a higher state.

X-ray absorption on the other hand is caused by a transition from an occupied lower state to an unoccupied higher state. If your material is in the ground state all the low energy state are however occupied so that the transition can only occur to a relatively high energy (conduction band) state.

To sum it up I think that your misconception is that the edges are somehow indepedent of each other. The K-edges however have in common that they all end in the $\left |1s\right\rangle$ state. So $\alpha$ and $\beta$ only differ by the upper state, that the electron occupies before the transition. For x-ray absorption we cannot have a $K_\alpha$ transition because the $\left |2p\right\rangle$ states are all occupied. We can only have a transition to the lowest unoccupied state, which is above all the characteristic lines.

Your terminology is confusing. The figure shows characteristic x-ray emission lines. "Edge" is a word limited to absorption. There is one K-edge, when the photon energy is larger than the $1s$ binding energy. This causes the edge in attenuation.

Are you confusing "edges" with "lines?"

"Edges," e.g. the 1 K-edge or 3 L-edges for Pb, are visible on a cross section plot for photoelectric absorption, and represent how the cross section behaves as a step function near the K (or L) binding energies.

"Lines", like the ones in your spectrum, are from characteristic X-ray emission, not absorption. Your tungsten X-ray spectrum shows the Ka and Kb lines in the right places.

Not the answer you're looking for? Browse other questions tagged spectroscopy x-rays orbitals or ask your own question.