Why can't Pseudo force from our frame of reference be a form of Inertia? 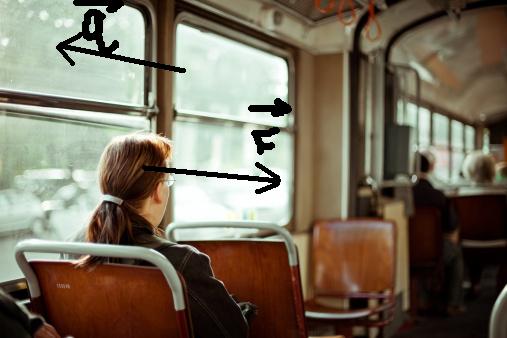 You are right. The cause of pseudo force is inertia. Let me elaborate. Pseudo forces are the forces which do not actually exist but are added to make Newtons equations hold. Here in this case, from frame of reference attached to earth, there is actually no force acting on the person in horizontal direction. But in fact there is absence of force which will decelerate the person along with decelerating bus. So due to inertia, person keeps moving. But in frame of reference of bus (which is no more inertial), person is accelerated in forward direction. So to make Newtons equations consistent in that frame, we add Pseudo force. But from earth's frame, it's just the inertia.

Not the answer you're looking for? Browse other questions tagged newtonian-mechanics forces reference-frames acceleration inertia or ask your own question.

5
Is the Normal force dependent on the density of the object the body is resting on?
2
If a vehicle (bus, train) rapidly stops (or accelerates, or turns), why don't our hair or clothes move from the inertial force?
1
How to find pseudo-force on a body in a non-inertial reference frame with respect to another non-inertial reference frame?
1
Ball inside an accelerating frame
16
What is the underlying explanation behind fictitious/pseudo forces?
0
My question is about the ommision of pseudo forces when we draw the free body diagram from an inertial frame of reference
0
Isn't inertia experience by person in moving bus same as torque
1
Isn't inertia experience by person in moving bus is Torque