So I will preface this by saying the following is simply a thought experiment. However, in my field, I have heard seemingly legitimate arguments for different answers.

The thought experiment goes as follows:

Suppose we have a closed shock tube in the vacuum of space and free of any gravitational or frictional forces. As many of you are probably aware, the shock tube has a high pressure side termed the driver section (state 4), and a low pressure side termed the driven section (state 1). The two sides are initially separated by a diaphragm until at a given instance, the diaphragm is ruptured. A shock wave begins propagating into the driven section and simultaneously a rarefaction begins propagating into the driver section. The post-shock and rarefaction state are denoted by states 2 and 3 in the schematic below. 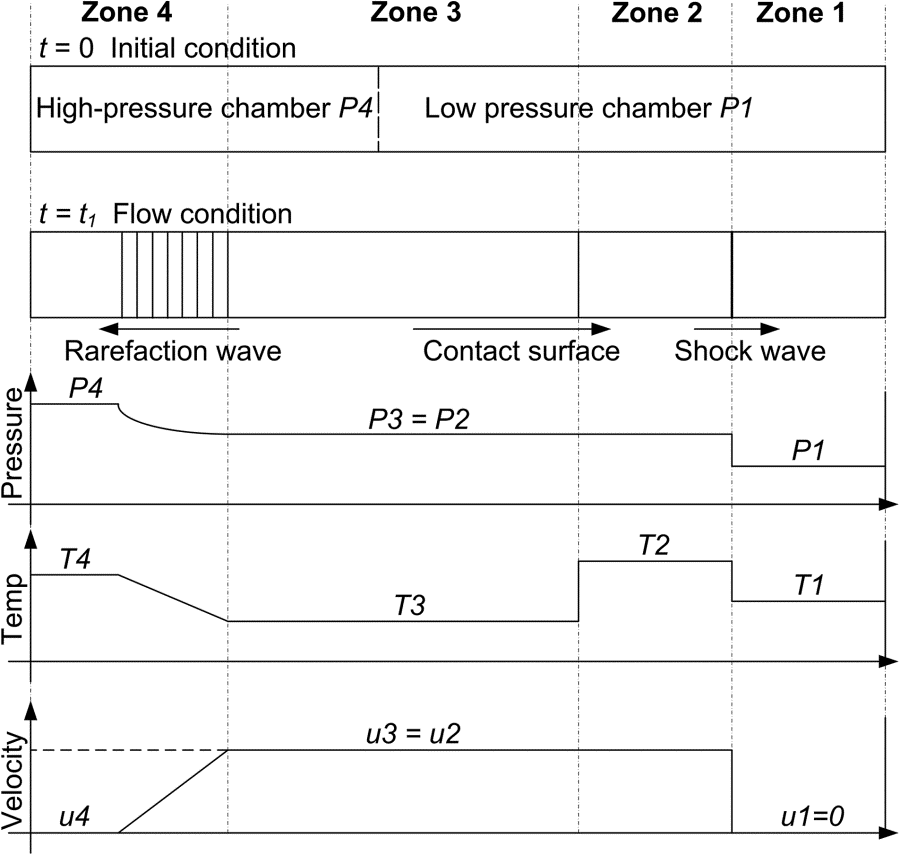 Now the physical value of these states can be determined in any classical text in gas dynamics, however, for the purposes of this thought experiment they are unimportant. As the gas goes into motion within the shock tube, a series of shock, rarefaction, and contact surface reflections and interactions will take place until eventually the gas inside the tube becomes stationary and reaches a spatially uniform equilibrium. The question then becomes, after all of the internal motion of the gas has resided, does the shock tube itself experience any net acceleration in any direction?

However, since the system is closed, there is no momentum flux through the surrounding control volume and we are simply left with,

Now this would be the force on the control volume, and from the dynamics of the fluid, it is obvious that there will be instances during the gas motion for which $\frac{\partial}{\partial t} \int_V \rho \vec{V} \ dV \neq 0 $. This is usually enough for some people, to which they claim, obviously the system will experience some form of a net acceleration in a given direction. Then the second crowd will come along and suggests, it is impossible for the shock tube system to experience any net acceleration simply because all of the motion from the gas within the shock tube acts as internal forces, and only external forces can provide a net acceleration to the system.

So I am curious, what are your thoughts as to which is the correct answer?