Can electrons be non-fundamental in higher dimensions?

I was wondering, is it necessary that all elementary particles remain elementary in higher dimensions too, or can there be a higher curled dimension (like those in string theory) where an electron, for example, is made up of more elementary entities?

When I started in particle physics back in 1962 or so, neutrons and protons had not lost their elementary particle status. Quarks were just being dreamed about. At the time we were very happy with the isotopic spin symmetry between neutron and proton and used the concept to organize the emerging hadronic resonances from our experiments. I am presenting this history in order to show that the concept of elementary particle and composite particle has evolved , is not immutable.

is it necessary that all elementary particles remain elementary in higher dimensions too,

It is not necessary, what is necessary is that any new theory assimilates/embeds the existing standard model which is based on the SU(3)xSU(2)xU(1) symmetry of the interactions of the elementary particles. The standard model does have the isospin symmetry and the proton and neutron as composite particles.

String theory does have curled higher dimensions, but the elementary particles are vibrational states on a string. It can embed the standard model but it is hard to see how the electron can be more composite as it is just a specific vibration on the essentially only elementary particle, a string.

where an electron, for example, is made up of more elementary entities?

This would mean a different, out of the box, mathematical model. It might be possible to imagine one, but as I said , it would have to accommodate the standard model symmetries.

We currently believe electrons are fundamental because they are described by a single quantum field - the electron field. By comparison a proton is not fundamental because it is the result of the quark fields. While it would be possible to describe protons by a proton field this would be an effective field theory that was useful only at low enough energies that the internal structure of the proton was invisible. The fundamental fields are the quark fields.

With this context I think your question breaks down into two parts:

Re the second question: the quantum fields arise (in a complicated way) from the compactification of the strings, and we still don't have a definitive description of how this happens. However there is no reason to doubt that the electron field can arise as a fundamental field, so there is no reason from string theory to suppose the electron is composite.

There could be particles that arise from the ways the extra dimensions curl, and these are called moduli fields. However we have never observed such particles and if they exist we should have been able to observe them by now. There are various theoretical suggestions for why the particles don't exist but this area is far from fully understood.

Can electrons be non-fundamental

Yes, definitely. We can make electrons along with positrons in pair production. We can also destroy electrons and positrons in annihilation. So they aren't really fundamental. However the sort of people who can't tell you why the electron has a magnetic dipole moment and a spin ½ tend to say "the electron is a fundamental particle", and tend not to concede that these measurable properties are hard scientific evidence of the electron's structure.

I was wondering, is it necessary that all elementary particles remain elementary in higher dimensions too

I imagine the answer would be yes, but I will reiterate that higher dimensions remain hypothetical. People have been speculating about them for a long time now. The book Flatland: A Romance of Many Dimensions was written in 1884. That's 132 years ago and counting. We have no evidence of any higher dimensions.

or can there be a higher curled dimension (like those in string theory) where an electron, for example, is made up of more elementary entities?

String theory features open strings and closed strings. There is a sense in that the electron can be said to be made up of a 511keV photon in a closed path. See the toroidal ring model on Wikipedia: "The toroidal ring model, known originally as the Parson magneton or magnetic electron, is also known as the plasmoid ring, vortex ring, or helicon ring. This physical model treated electrons and protons as elementary particles, and was first proposed by Alfred Lauck Parson in 1915". That was before pair production and annihilation. More contemporary papers include https://arxiv.org/abs/physics/0512265 by Qiu-Hong Hu and Is the electron a photon with toroidal topology by Williamson an van der Mark. I think the answer is yes, but that this "curled" photon doesn't involve any higher dimensions: 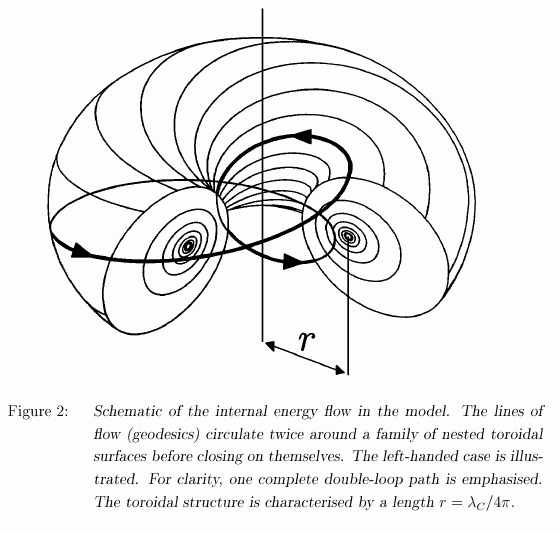 Not the answer you're looking for? Browse other questions tagged particle-physics string-theory electrons spacetime-dimensions or ask your own question.

86
What is more fundamental, fields or particles?
16
Why do physicists think that the electron is an elementary particle?