Can the direction of angular momentum and angular velocity differ?

While studying rotational mechanics, I came across a section where it mentioned that angular momentum may not necessarily be parallel to angular velocity. My thoughts were as follows:

Angular momentum ($L$) has the relation $L=I\omega$ where $\omega$ is angular velocity and $I$ is the moment of inertia, so following this relation, it seems they should be in the same direction. Why are they not?

Consider a thin rectangular block with width $w$, height $h$ resting along the xy plane as shown below.

This was derived from the definition (as seen on https://physics.stackexchange.com/a/244969/392)

In the figure below you see the direction of angular momentum, and the circle about which the center of mass is going to orbit due to precession. 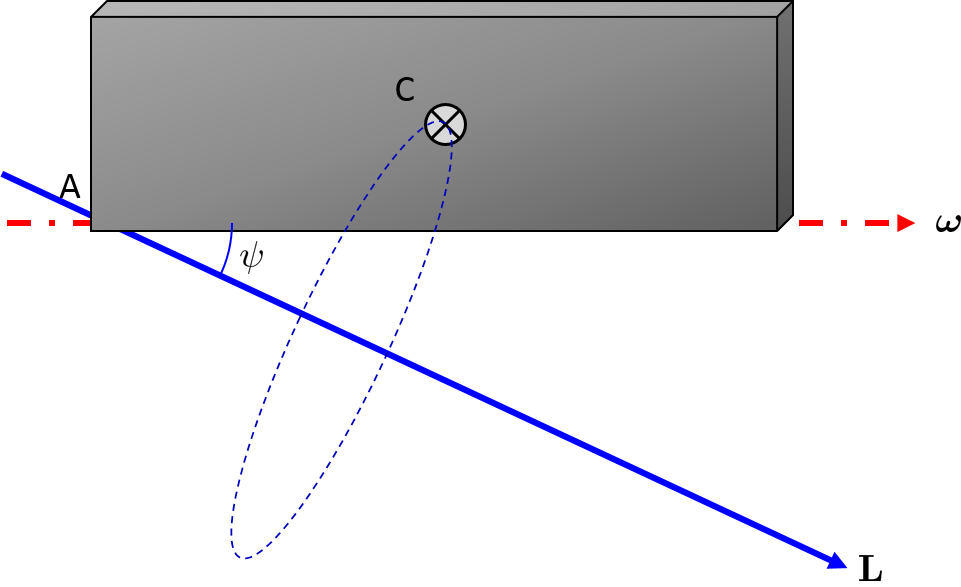 Physicsapproval, you already apparently know that the moment of inertia $I$ tensor (inertia tensor for short) is indeed a tensor rather than a scalar. If it was a scalar, then by definition angular momentum and angular velocity would always be parallel. This is not necessarily the case due to the tensorial nature of moment of inertia is tensorial.

The inertia tensor of an arbitrary three dimensional rigid body as expressed in an arbitrary set of orthogonal Cartesian axes can be expressed in terms of a 3x3 matrix that is (a) symmetric and (b) positive semidefinite. These two facts mean that one can always choose a set of orthogonal axes in which the inertia tensor is diagonal. There are three distinct cases for a 3x3 diagonal matrix:

This only holds when the product of inertia is 0.

From matrix algebra, multiplying a (n x 1) vector(x) by an (n x n) matrix (A) will scale the vector components in eigenvector direction by respective eigenvalues. $$ Ax = b; $$ If eigenvectors are not aligned with coordinates of the defined vector then resulting vector (b) will not have the same direction as x. Eigenvectors will be aligned to coordinates only when non-diagonal components of A are zero.