What is really instantaneous?

It is an experimental fact that an object that is at rest at a particular instant behaves differently than an object that, at that instant, is in the same position but in motion, would behave. It is up to us to fashion our physical theories such that they agrees with this observed behavior of the world.

Experience forces us to conclude that knowing where every particle in the object is at some particular instant is not a complete description of the state of that object. There is something more than position that can be different, something that is responsible for the object sometimes being found at slightly different positions in the following instants.

In classical mechanics we don't even attempt to understand what the "something more" is -- but we do give it a name: momentum. It is common to learn in school that momentum is an abstract quantity that you can compute once you know the mass and the motion of an object, but it is just as fruitful from a physical point of view to imagine that it is something that really exists: In order to fully specify the state of an object, you need to know not only where it is but also the quantity of momentum it "contains". If you know both of these, you can make a pretty good guess at what its position in the next instant will be.

In particular, it turns out that momentum is conserved, so it does make good sense to think of it (at least some of the time, informally) as a "substance" that is inherent to an object, rather than just a helper quantity for calculations. The transport of momentum from one object to another is known as force.

Quantum mechanics has its own mathematical description of what momentum "really is", in terms of quantum amplitudes. This is not particularly accessible and is best ignored as long as you're on a stage where you can ask this question. It is a matter of some contention whether the words "really is" even apply to any quantum-mechanical description at all.`

Instantaneous (linear) speed isn't that helpful. In planar rigid body mechanics instantaneous rotational speed and the point about which the body is rotating is extremely helpful as it describes the velocity of the body at every other point (ie. describes the motion completely).

For example see my answer in Rotation of Slipping Ladder where the motion of the ladder is described in terms of the instant center of rotation (Point S below). 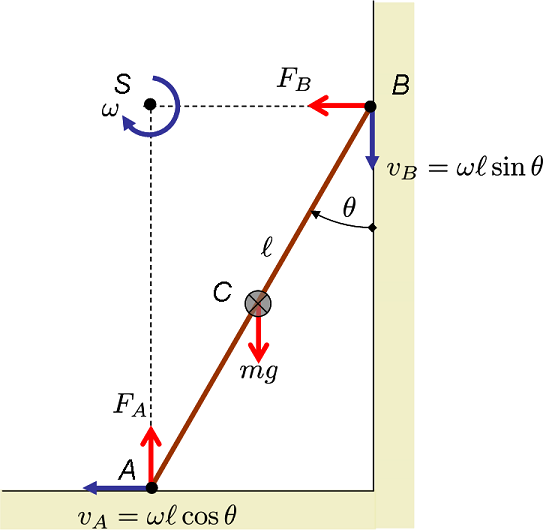 The helpful insight extends to the fact the once the linear velocities of the body are described everywhere, any reaction forces applied have to be perpendicular to the motion (reactions do no work). So the direction of the reaction forces is always pointing towards the instant center of rotation.

Not the answer you're looking for? Browse other questions tagged classical-mechanics kinematics speed or ask your own question.