Why does rotation occur? [closed]

So it sounds like a dumb question, as it is very intuitive why rotation occurs. However, can you give me a scientific explanation as to why whenever I exert a force on a body it tends to move, but when it is tied to something or I am pushing it through the edge of an object, it rotates? What is there in a body which lets it rotate in place of simply moving?

The scientific explanation is easy: if the sum of all forces is not directly in line with the center of mass of the object, it will rotate, and friction forces are applied at the point of contact. 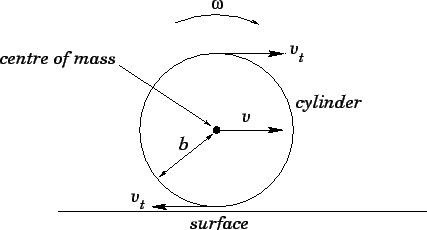 The more interesting question is how to understand that intuitively.

Consider the case of a soda can rolled along a table. For sake of argument, let's say you push right through the center of the can. So we can look at all of the forces.

The last one is the key. There's friction between the table and the can. It acts at the point where the can touches the table, resisting the forward motion you are applying to the can. Because this force is not in line with the center of mass of the can, it starts rotating.

We can change this up a bit by pushing on the can a little lower. Now, friction is still opposing us like before, but the force of our hand is also no longer in line with the center of mass. In fact, if we choose just the right point, we can cancel the rotational force caused by friction holding the can back with the rotational force caused by our finger pushing it forward off-center!

It's implicit in Newton's second and third laws together with one crucial assumption.

Consider the simplest system - two point masses linked by a massless infinitely stiff tether. Now impart a force on one and write down the equations of motion for the point masses given the tether. You will find that the system's rotation falls naturally out of the equations.

Indeed, for an arbitrary system of point masses, you can define their total angular momentum about their center of mass and show that the time rate of change of this quantity is indeed given by the nett torque about the center of mass imparted to the system if you assume that the force on particle A from B is equal and opposite to that on B from A and that the forces between the particles always act along the line joining them. This is a specialized case of Euler's second law, and Newton was aware of its holding when the these assumptions hold further to his second law. Indeed, it was thought experimentation along these lines that helped led him to his third law.

So Newton's second and third law together with the assumption of forces along lines joining particles is equivalent to conservation of angular momentum for systems of particles.

Rigid body rotation is simply the special case of the above when the forces between constituent atoms become very large for very small strains, i.e. the body is stiff and can thus only possibly move by Euclidean isometries, i.e. by translation and rotation.

Not the answer you're looking for? Browse other questions tagged newtonian-mechanics rotational-dynamics torque rotation or ask your own question.

6
Bicycle counter-intuitive: in which direction it will move?
9
Why does a rigid body rotate and not simply translate when pushed with an instantaneous force?
0
Effect of Internal Forces on Torque
1
How do I deduce the Axis of Rotation of objects while solving rolling,angular momentum questions?
2
Tension in a rotating object
5
Rotation of a Spinor
12
Why do object rotate at all?
1
Why does Friction not accelerate the body in this case?