Is this even a phase transition?

I'm trying to understand how individual contributions of single particles can add up to something one would call a phase transition. For this I consider a model of a system of $N$ one-dimensional particles in a potential well like this:

Here $x_i$ is position of $i$th particle, $U_{II}>0$ is height of potential barrier, $d$ is width of potential well and $L>d$ is the width of the total motion area. There's no interaction between the particles, only with the external potential $U$.

Now I calculate how average kinetic energy $\left\langle T\right\rangle$ depends on average total energy per particle. This should be proportional to temperature, since both inside the well and outside of it I have an ideal or almost ideal gas. Here's what I get for $\langle T\rangle$: 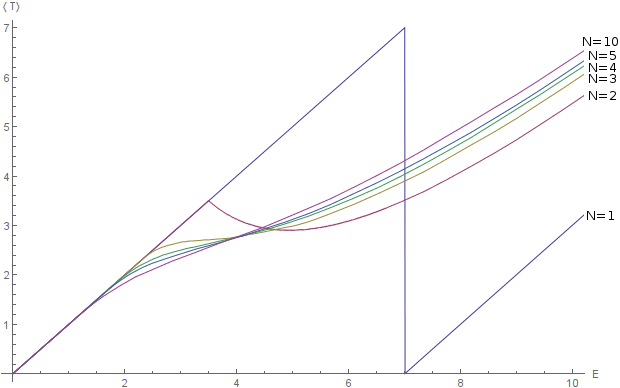 I calculate it as

using Monte-Carlo integration. Here $\langle T_i\rangle$ is kinetic energy of $i$th particle averaged in time, and $\langle T\rangle$ is $\langle T_i\rangle$ averaged over all particles and possible combinations of energies of each particle $E_i$ such that total energy of the system is $EN$. The discontinuity of the curve for one particle is due to the particle going out of the potential well ($E\gtrsim U_{II}$): near this energy the particle most of the time moves very slowly above the barrier of $U=U_{II}$, thus its average kinetic energy is small.

And here's how what I suppose to be heat capacity, namely $\frac{dE}{d\langle T\rangle}$, looks (the noise is due to derivatives of Monte-Carlo-integrated function) 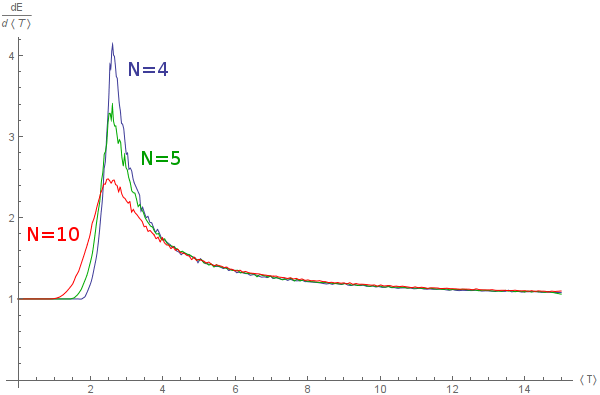 This seems to resemble the peak of heat capacity of a second order transition, c.f. these plots for the Ising model simulations.

But my doubt is that as I increase number of particles, the peak appears to decrease its amplitude and widen. This shouldn't happen for a phase transition, which is normally a many-particle effect. So my question is: is what I described above even a phase transition at all? Or will the peak of heat capacity actually drop to zero once I take the limit of $N\to\infty$? Or am I completely wrong about what I think is heat capacity or temperature for this system?

Calculating average energy per particle, we have (setting $k_B=1$):

Now if we plot $T(\langle E\rangle)$ dependence, superimposing it on the picture in the OP, we'll get (dashed line here): 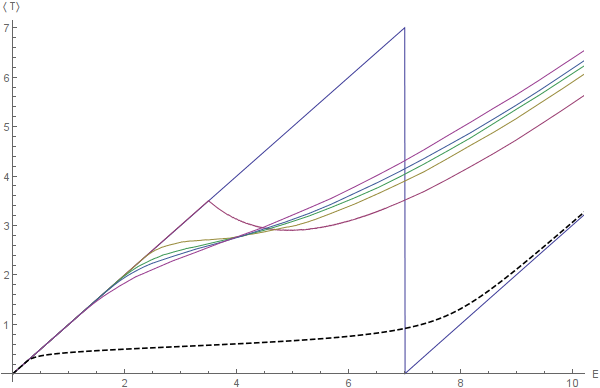 We can see that

I believe that by restricting yourself to an ensemble of non-interacting particles, you have a priori forbidden a phase change from occurring, in that you have essentially required the particles to remain an ideal gas at all temperatures. After all, any other phase requires some interaction to constrain the particles' motion and energy. The discontinuity you're getting for low $N$ is a numerical artifact that should indeed be smoothed out at higher particle multiplicity.

Not the answer you're looking for? Browse other questions tagged thermodynamics statistical-mechanics phase-transition or ask your own question.