Some doubts related to interference of light by air wedge 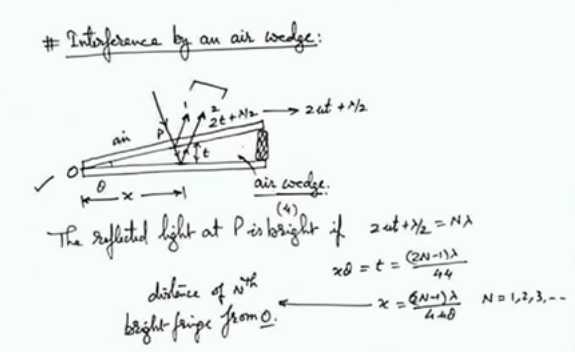 We were taught "Interference by an Air Wedge" today in class. I have attached the image of diagram we were taught and the related formulae. However, I have still some lingering doubts about this topic.

In the air wedge, why don't we consider the rays reflected from the upper part of top plate and bottom part of lower plate ?

When I asked this question in class my teacher said something along the lines of "Due to thin plates for the two waves from upper and lower part phase difference will be π due to which destructive interference take place and hence it is better to ignore these...﻿"

So, even after taking the assumption that the thickness of the plates tends to $0$, we see that the waves should also cancel out each other. I don't understand why it is correct to consider only $2$ of the reflected $4$ waves and calculate for bright and dark fringes.

Your concern is valid, but it turns out that accounting for all reflections doesn't essentially change the result.

Now, the amplitudes of the electric field due to the four reflections are

where the phase factors are due to traveling the distance $2t$. (The $\pi$ phase factor from some of the reflections is accounted for in the definition of the $R_i$ and $T_i$, some of which are negative.)

If we only include the reflections off the tops of both panels, the total amplitude is $$R_1 + (\text{phase factor}) T_1 T_2 R_1$$ where the phase factor depends on the size of the air wedge. Now, if we include all four reflections, we get a total amplitude of $$(1+T_1 R_2/R_1)\left(R_1 + (\text{phase factor}) T_1 T_2 R_1\right)$$ which is identical up to a constant. Therefore we can ignore two of the reflections, and the result will be essentially the same -- the peaks will be in the same places, even though the overall amplitude will be wrong.

Not the answer you're looking for? Browse other questions tagged optics visible-light waves refraction interference or ask your own question.

0
Zone Plate Spacing
0
Newton's ring conceptual doubt
1
Interference of 2 particular waves in Newton's rings experiment
2
Interference between incident and reflected light rays in thin films
0
Treatment of "thickness" of medium for light traveling through a low-index medium and being reflected from the surface of a high-index medium
0
Thin film interference with bottom medium denser
1
Why does $\rm TiO_2$ require less thickness for thin-film interference than light wavelength suggests?