What can drive the higgs mass in mSUGRA up?

Now, as we all know ;-), the Higgs lives around 125 GeV. Also, I understand that in leading order the lightest higgs should be around the Z mass, and that it gets a large correction from the top quark that pushes it upwards. What I'm wondering is now: 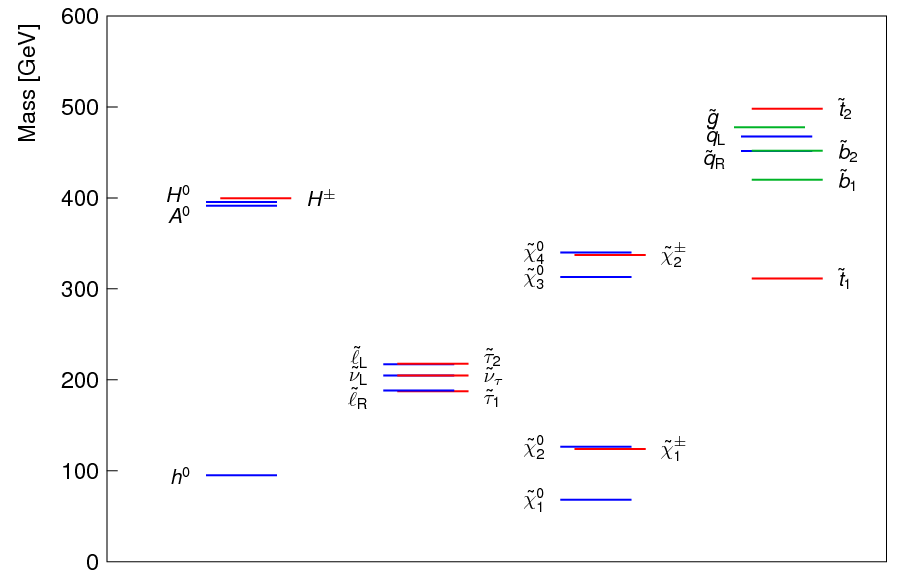 I think it simply means that you didn't choose the point in the parameter space that gives the Higgs mass you want. Try and increase $\tan \beta$ and/or $m_0, m_{1/2}, A$ and see how this affects the mass of the lightest Higgs. And yes, this little $h_0$ is a SM-like Higgs.

So if you want to increase the mass, you have to increase $\tan \beta$ as well as the mSUGRA input parameters, because they determine the average mass of the stop (and the mixing)

This paper introduced the so-called $m_h^\mathrm{max}$ scenario which maximizes the highest possible value for $m_h$ for each value of $\tan \beta$ (and for a fixed value of $M_\mathrm{SUSY}$, note that the top mass has decreased a bit since the paper was written).

Looking at Figure 4, it looks (at least with their choices of other parameters), that the mass of the light CP even Higgs boson does not go beyond 132 GeV.

The fact that a particle consistent with the Standard Model Higgs boson was discovered below 132 GeV allows for the possibility that this could be the lightest CP-even Higgs boson predicted by Supersymmetric theories.

The MSSM would be in serious trouble if such a particle had been discovered at a mass much above 132 GeV.

Not the answer you're looking for? Browse other questions tagged supersymmetry software higgs or ask your own question.

12
Alejandro Rivero's correspondence: diquarks and mesons as superpartners of quarks and leptons
6
Which collision energy at LHC is better for hunting 125 GeV Higgs, 7 TeV, 8 TeV or 14 TeV?
6
Is a 125 GeV Higgs large (or small) for the MSSM?
8
What is the most natural new physics one can expect at the TeV scale: new (supersymmetric)particles or some new (non-commutative) spacetime structure?
8
Renormalization and the Hierarchy Problem
2
Unbroken Supersymmetry and the higgs mass
13
How can the mass of Higgs give preference to SUSY vs multiverse?
4
Soft SUSY breaking fermion mass terms in MSSM for matter fields
4
Can mass develop without the Higgs mechanism?