Hollow conductor containing charge: why is internal field cancelled outside and why are the field oustide the cavity zero inside the cavity? 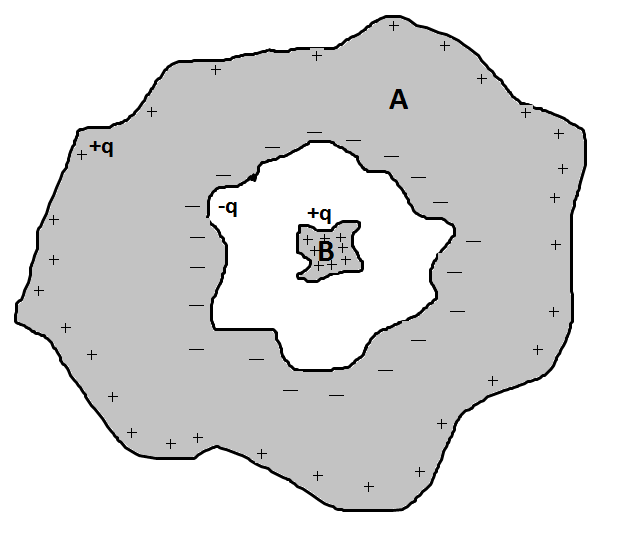 My question is: how to prove (possibly in a rigorous way) the two following facts?

Nevertheless I'm not totally sure of the following implication

Can I come to this conclusion with this reasoning? (The same reasoning would lead to the conclusion that also $\bf{E}_{\sigma_{A,ext}}=0$ inside the cavity).

Let $V$ be the total potential that is zero at $\infty$. We know that V is constant in both conductors. Let $V_B$ be its value inside B and $V_A$ its value inside A. That's all we need to reconstruct the potential and answer the question in detail.

We need now to identify each component.

Finally, regarding ${\bf{E}_{\sigma_{A,int}}}$, it won't be zero everywhere inside the cavity except for the special case where the associated charges generate a constant potential inside that cavity (for example in the case of a spherical symmetry).

The electric field in a volume bounded by conductors is uniquely determined if the total charge on each conductor is given.

(2) The outer surface will have $Q$ distributed on it regardless of the cavity's shape. So even though the outer conductor technically has no charge, just think of the volume outside A as bounded by A's exterior (with $Q$ on it) and infinity. Then apply the same uniqueness theorem to show the irrelevance of the cavity (in other words, $\vec{E}_{A,int}+\vec{E}_B=0$ outside).

(1) The rigorous explanation lies in the uniqueness theorems presented in Chapter 3, and their associated proofs.

(2) The final step is wrong: A vanishing integral does not imply a vanishing integrand in general. Besides, that's not a conclusion you want to come to. Otherwise it is good reasoning, and very much in the spirit of $\Phi$ as a conservative field (replacing $\vec{E}$ with $-\nabla \Phi$ makes the integrals very easy to compute moving between the surfaces of a single conductor).

Why is this not a standard Farady Cage problem that everyone knows well?

(Have you got the quote correctly applied to the right issue? Or the circular path integral proof was too well hidden in the book)

For reasoning consider a symmetric perfectly circular ring of charge. Your conductor allows charges to move, so they will distribute evenly in your irregular conductor, matching this arrangement.

For each point inside the conductor the force due to the nearest points of the ring will be exactly compensated for by the force from those further away (although the force is weaker, there are more of them), rendering no net force on a charge at that point. (A mathematical integral proof has been done, but that's not what you asked for).

Ok, we have conductor A, conductor B, we have charged conductor B and now wander what is the distribution of charges in our system.

Let's try to guess. Let's take a conductor like A, but without cavity. Let's charge it with total charge $q$. This charge would distribute over the surface of conductor. Distribution would be such that the total electric field anywhere inside the conductor is zero: there are no more electric current. Let's remember how the charge is distributed: $\sigma_{A, ext}$.

Now let's take an infinite conductor with a cavity and another charged conductor B inside the cavity. Charges would get distributed on the inner surface of cavity in a way, that electric field anywhere outside the cavity is zero. Let's remember how the charges are distributed now: $\sigma_{A, int}$ and $\sigma_{B}$.

Now get back to original problem. Let's manually distribute charges exactly like them were distributed: $\sigma_{A, int}, \sigma_{A, ext}, \sigma{B}$. And now let them free! What would happen?

May be actual distribution would be different from what we have constructed? No, there are no other solutions.

Suppose there is some other distribution. Let's change the sign of all the charges and combine both pictures. We would get a new distribution, still equilibrium one, total charges of all the conductors would be zero, but still distribution is not: there would be some positively and negatively charged areas. That means there is some electric field in our system. Electric field has potential energy. The position can not be in equilibrium because charges can redistribute, eliminate all the electrical field and the potential energy would decrease.

The proof is not extremely rigorous, I know :)

This is a worthy question to ask, and the answer is not trivial or totally immediate.

It's not clear why an effort is not usually made to address this question properly: I gave two complete arguments for why the combined field due to 'fixed' and induced charges in any one 'domain' of space doesn't penetrate into another domain, where any two domains are completely separated from each other by conducting material (and thus there's exactly one domain that extends to infinity and all other domains have finite volume). It's not a difficult argument, starting from either of the two standard Electrostatic existence and uniqueness theorems.

The most important thing to come to a consensus on, is whether there is a need for logically complete arguments in the first place!

Not the answer you're looking for? Browse other questions tagged homework-and-exercises electromagnetism electrostatics electricity conductors or ask your own question.