How to calculate net force on a rocket from multiple engines?

Let us use the Falcon 9 engines configuration as an example. It has nine engines: eight in the outer circle and one in the centre. 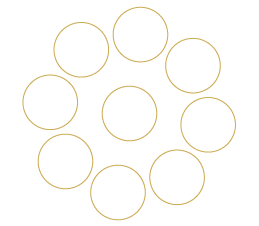 How would I calculate the net force that all of these produce on the rocket and their horizontal and vertical components, if the thrust each of the generated was not identical. Essentially I want to be able to calculate the angle and value of the net thrust when some engines are producing a larger force than the rest

To get the net thrust you add the horizontal and vertical thrusts of each engine.

But what I really think you are asking about with unequal thrust is torque, turning force on the rocket. (which is the distance from the center of mass times the perpendicular component of thrust, which you then sum up - lots more on this basic physics is easy to find)

If the thrusts are vectored (which I don't know on falcon 9, they can compensate for torque. Or it might have lateral thrusters for this purpose at another location. Or both. Another way to do it is with a gyroscope, a reaction wheel)

Not the answer you're looking for? Browse other questions tagged newtonian-mechanics forces rocket-science or ask your own question.

0
How is rocket acceleration with flight angle calculated?
3
How do reaction engines create a force against the rocket?
3
Model Rocket Stabilisation
0
Apparent work energy paradox
0
Calculating Rocket Engine Power from Force and Burntime
1
How can I simulate a path for my model rocket?
3
What is the net force on a rocket immediately upon ignition?