What is the cause and meaning of harmonics?

Let's suppose that a cantilever is vibrating at a frequency of 2Hz. That means that it goes up and it comes down twice per second. I don't understand what the term harmonic means. I can't grasp how the vibrating rod moves twice and, at the same time, four times or eight times per second.

Descriptions of harmonics in engineering texts that I study explain nothing. These explanations suggest " an event that happens twice, four times, etc at the period of a vibration".

Any comment, suggested text or answer will be useful.

The fundamental mode of a cantilever looks like this:

And the displacement of the end of the cantilever will be given by:

for some frequency $\omega_0$. But the cantilever can also oscillate as well as bending i.e. something like:

In this case the position of the end of the rod will be given by:

where $\omega_1$ is a higher frequency than $\omega_0$ and is related to the way the cantilever oscillates along its length. So in this case we have more than one frequency describing the motion. Although I won't attempt to draw them, there can be higher frequency oscillations as well. In general the position of the end of the rod will be given by:

The $\omega_i$ for $i \gt 0$ are the harmonic frequencies or overtones.

Now what does it mean by going up and down once, and also twice, in the same period? Just plot $\sin x + \sin 2x$. That's what it means. 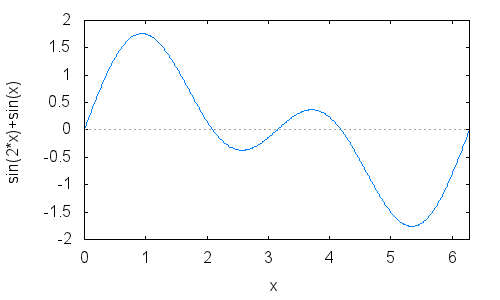 Not the answer you're looking for? Browse other questions tagged terminology vibrations harmonics or ask your own question.

0
Young's Modulus and Vibrating String Harmonics
18
Why do harmonics occur when you pluck a string?
0
What are overtones and how do they relate to harmonics?
2
What is the relationship between harmonic motion and the harmonics of a wave?
1
Harmonics and the frequencies
1
On Harmonics In Physics
6
Why does plucking a string produce harmonics instead of a pulse?