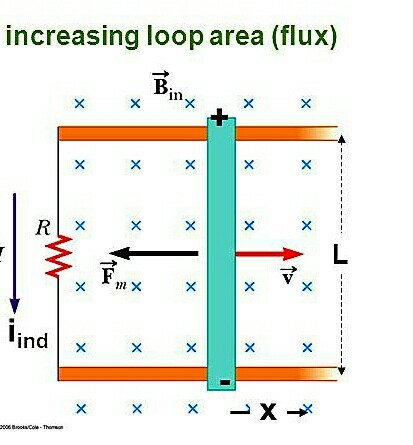 The induced emf blv is called motional emf. thus we are able to produce induced emf by moving a conductor instead of varying magnetic field that is, by changing the magnetic flux enclosed by the circuit. it is possible to explain the motional emf expression by invokin the lorentz force actin on the free charge carries of conductor.Consider any arbitrary charge q in the conductor. When the rod moves with speed v, the charge will also be moving with speed v in the magnetic field B. The lorrentz force on this charge is qvb in magnitude, and its direction, irrespective of their position in the rod.

It is not obvious how an emf is induced when a conductor is stationary and the magnetic field is changing-a fact which Faraday verified by numerous experiments. In the case of a stationary conductor, theforce on its charges given by

since v=0 , thus any force on the charge must arise from the electric field term E alone . Therefore, to explain the existence of induced emf or induced current, we must assume that a time-varying magnetic field generates an electric field . However we hasten to add that electric field produced by static electric charges have properties different from those produced by time varying magnetic fields. we know that charges in motion(current) can exert force/torque on a statiionary magnet. conversely, a bar magnet in motion(or more generally, a changing magnetic field) can exert a force on the stationary charge. this is the fundamental significance of the Faraday's discovery. Electricity and magnetism are related.

Not the answer you're looking for? Browse other questions tagged electromagnetism maxwell-equations electromagnetic-induction or ask your own question.

7
What force causes the induced EMF of a loop? And, the difference between a loop EMF to motional EMF?
1
How is motional EMF developed?
3
Confusion about induced emf vs motional emf
0
Can emf be induced by reducing the radius of a loop?
1
Energy conservation in induced emf in open loop
1
Can the emf induced in a conductor passing through the magnetic field be explained via magnetic flux?
6
How is it possible for the induced emf to take negative values in Faraday's Law of induction?
2
Does a time varying magnetic field produce an EMF in an open conducting loop? (slidewire generator example)?
1
Faraday's Law - When do we know when it is a motional EMF or an induced electric field?