I heard light was its own antiparticle. What happens if two photons exactly cancel each other out? [duplicate]

In a laser multiple in-phase light rays add up into one strong coherent beam of light. What happens if two opposing laser beams sum up and exactly cancel each other out? Where does the lost energy go?

It sounds like you are talking about when a photon pair collides and makes an electron-positron pair (for example), which we might call annihilation of the photons (just like any particle/antiparticle). That requires at least the rest energy of two electrons, a total of 1.022 MeV. If there is less than that energy, the photons will not interact (unless they can make some smaller energy particles, but the likelihood of that is very tiny). If you are instead talking about destructive interference, it is very hard to accomplish destructive interference everywhere-- usually if you get it someplace, the photons just go someplace else, so there's no need to do anything with their energy.

(1) The situation you are asking also happens in two set of oscillating ropes connected in the middle with an overall shape of + like this: 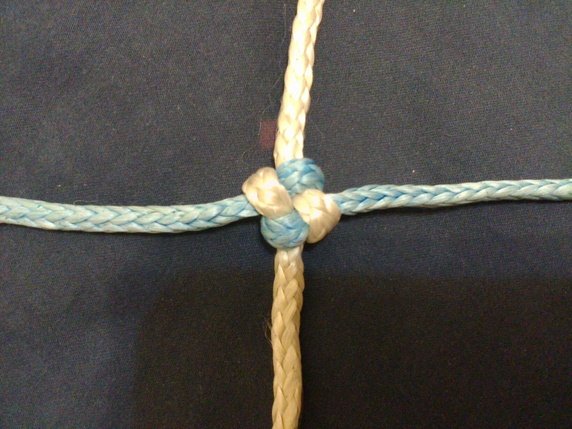 When you start to oscillate from two ends, you can see the process is time-dependent. Sometime in the intersecting point, sometimes it has almost twice the amplitude, and sometimes it goes to zero amplitude. But the energy is everywhere spread around in the two ropes as potential energy, tension energy, kinetic energy and the dissipate heat. In any case, the total energy is conserved, including the input energy you oscillate the ropes.

(2) For the linear optics and linear QED (the usual Maxwell equation in the vacuum or in the usual medium), at the leading tree-level order when you calculate the Feynman diagram, the photon and the photon do not interact with each other. It is not allowed by Feynmen rule. However, at the 1-loop order, the two photon (wavy lines) can annihilate with each other through fermions running in the square (solid lines) and the photons are created again. You can take this effect into account of the photon-photon scattering, one photon scatters from the transient vacuum charge fluctuations of the other. 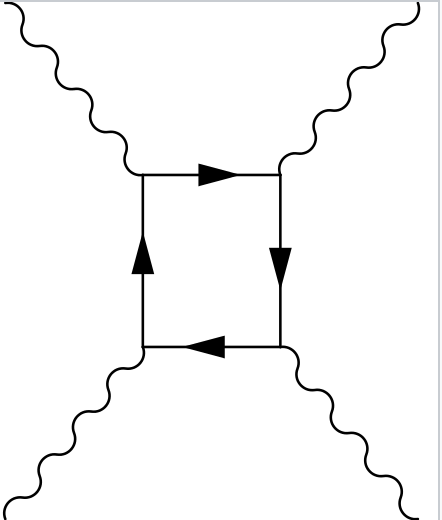 (3) For the nonlinear optics and nonlinear QED (the modified Maxwell equation in the exotic medium), it is possible that the two photons can direct interfere with each other, but the overall effect should based on the equations. The energy should be still conserved taking into account the nonlinear effect through the medium.

Not the answer you're looking for? Browse other questions tagged visible-light electromagnetic-radiation photons antimatter or ask your own question.

110
What happens to the energy when waves perfectly cancel each other?

1
Can electrons change the frequency of light as they bounce off/around?
1
How does one subtract two light beams?
5
Why can't incoherent light be collimated as well as laser light (e.g. in a laser pointer)?
2
How come you see what happens to the energy of a system when 2 free linear plane waves cancel out?
5
Opposing Laser Beams Turns One Laser Off
0
How does a Michelson interferometer work?