If causality reversal is an argument against velocities exceeding the velocity of light, can the same argument be made for sound?

Reversal of causality is stated as an argument against any v>c, like in this thought experiment. 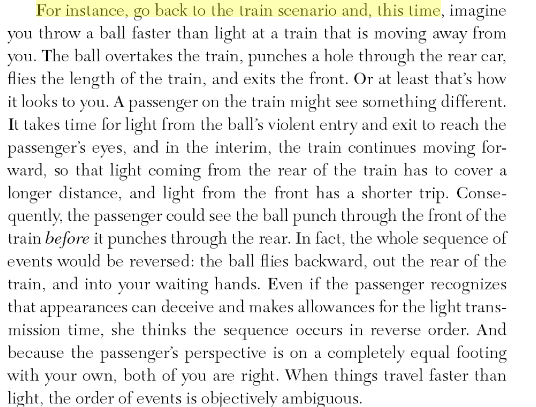 But if we were a species that used echolocation as our primary sense, and the ball was travelling faster than the speed of sound, then wouldn't the train passengers (in this case too) experience the reverse order of events ? They would then conclude that nothing can travel faster than sound. What am I getting wrong here ?

(I know that there are other ways to show that things can't accelerate to the speed of light.. but I am just asking with reference to the logic of the above thought experiment)

"They would then conclude that nothing can travel faster than sound."

Someone using echolocation to continuously observe objects moving uniformly along straight trajectories would find that some objects remain always "visible", on both the inbound and the outbound legs (at relative subsonic velocities), while others "disappear" after passing by (supersonic velocities). But eventually they would also find that at least some of these "disappearing" supersonic objects may become "visible" again if the observer ran fast enough after them, for instance by riding a train. And then they would necessarily discover that if this works on the ground, it also works on the train, etc.

So an echolocating species would be bound to understand that velocities faster than sound are entirely possible.

Regarding reversal of causality:

An observer probing an incoming supersonic object through echolocation would indeed receive return signals in backwards order, in an apparent reversal of causality. Then would loose sight of the target on the outbound leg. The sounds emitted by supersonic objects would likewise be received in backwards order, on both legs. But the correct causal sequence may still be observed by recording position vs. time locally, at any given points along the trajectory.

Or the echolocators may discover better means of observation, like e.m. waves. At which point they would also discover the speed of light limit and relativity ;D

In any case, the echolocation "reversal of causality" would remain "apparent", as opposed to an actual reversal where events occur in backwards order even when observed through point-local recordings.

A couple of observations on the train scenario itself:

This latter idea reminds me of an anecdote about the first trains designed to go at the "unheard of velocity" of ... 30mph: there was a public outcry against them out of concern that air in the cars would "naturally" swoosh out and leave the passengers in great peril of asphyxiation. The point: the air in the train car remains at rest with respect to the car, but moves at the velocity of the car relative to the ground. Any echolocation signals propagating forward within the car travel faster-than-sound relative to the ground. No such thing happens with light, there is no carrier medium for light that moves along with the train car.

The species in question that used echolocation would experience the sequence of events in the wrong order but their subjective experience is not the objective truth of the causality of the events. It is just their psychological interpretation of the environment which wasn't meant to deal with this ultra rare scenario.

The species that used echolocation would conclude that objects CAN move faster than sound because they don't obey causality (assuming they could differentiate that the order is indeed the wrong way round from the type of sound). Whereas it is impossible to witness the scenario in thought experiment so we conclude the opposite that nothing does travel faster than light.

First of all the fact that there is a limit to the speed that anything can move is a consequence of the homogeneity and isotropy of space-time. This limit is the speed of any massless particle. The point I am trying to make is that the limit to speed is a property of space-time. Now can similar arguments be made for sound? No. First of all what is sound? Sound is ultimately is the oscillation of matter pressure and displacement $\textit{through} $ a medium like air or water. That medium is contained in space-time.This means sound waves have nothing to do with the structure of space-time itself and hence nothing to with causality.

Not the answer you're looking for? Browse other questions tagged special-relativity causality or ask your own question.

4
Causality without light
6
Tachyonic antitelephone vs messaging through a wormhole
3
Is there a stationary frame of reference?
5
Why is causality preserved in special relativity?
0
Why is light different than sound in terms of the assumptions we make regarding causality?
3
Relativity of Simultaneity - Issue with the train car example
2
What is causality (traveling with v>c?)
0
Is Relativity of simultaneity just a flaw in perception?
3
How was it determined that the speed of light in vacuum is a constant?