Analysis of simultaneity in Special Theory of Relativity

Set up: A moving train with two flash lights on the wall, a person in the middle of the train. A mid point on the tracks where second person/observer stands. Flash lights flash a light when mid-point on the tracks and of the train have the same coordinate in both frames of reference. Suppose 1D problem plus time of course :-) When midpoints of both frames coincide flash lights flash. Observer on the train has to see this as a simultaneous events because obviously it has to be that way. Here we see same thing as in non relativistic case where we fire a bullets from a gun. But what does the person on the tracks see? First of all, he can see light signals meet at the train midpoint where the moving observer is placed. Is it possible that he sees light signals meet at his midpoint? Well that would be imposible because it would suggest that event happend in both places and that is just crazy right? Signals should meet at the trtains mid point. Just like with the bullets. But for bullets we can explain this by simple velocity adition (two bullets do not have the same speed in the track frame of reference when fired). But light has to have the same speed for both observers! So when the light is emited it can either act like it is glued to a train frame or to the track frame. Nature of this light propagation is such that in order to make everything have sense light has to be emitied in different moments for the rtrack observer, it is the only way. My question is this: if you emit a light signal like this here described, how does the light know that this signal has originated from the flashlights that are stationary on the train? What mechanism takes care of this?

I am adding this piture as o ilustrate my troubles and my wondering..are we forced to say that somehow we have two versions of one reality because of constancy of speed of light? 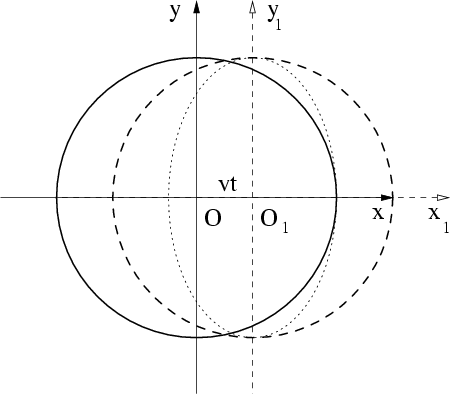 It should be clarified, what means “an observer sees”. To make proper conclusion, at what time certain event took place in certain coordinate of reference frame, you have to have clock in that place. Procedure for every observer looks like this thought experiment. An observer in a train and observer on the platform allocate (place) clocks along platform and along the train. He can put clock every centimeter. Then each observer synchronizes all clocks in his own reference system by means of Einstein technique, admitting that speed of light in each direction for every inertial frame is the same. Then all clocks in his reference system show the same time, a clock on observer’s wrist and a clock a million kilometers away from the observer. If event happens in that place one million kilometers away, now he knows time of event in his frame. Since frames are in relative motion, that leads to so-called relativity of simultaneity. Simultaneous evens in reference frame K will be not simultaneous in reference frame K’. Adjacent clocks of different frames will show different time. This way of thinking puts thoughts in order.

Resolution of my problems lies, I believe, in the observation of what exactly it means to observe the same speed of light in every reference frame. So, simple answer is connected to the picture I posted in my question. For every observer, moving or not, spherical light wave will remain spherical. One of the consequences of this is that the center of the sphere travels along with the observer, it has to, otherwise spherical light wave or the same speed in relation to a light would not be observed. So, when flashlights flash a light, one spherical wave, or which ever the form it is, travels with the train, but another one travels with the tracks. Whem I say another, I mean the same but observed from different frame of reference and it appeares there are two of them. So now, we have the fact that for a track observer it seems the wave has its origin glued to a point on the track where the emission originaly happend, and the train observer has it glued to a point on the train where the emission originaly happend. For the track observer train observer is traveling and moving with regard to the origin of light. So for the track observer its like origin or flash lights were stationary with regard to him, right there on the track. But wave front must nevertheless meet at the point which coresponds to a train observers position in both frames of reference. In order for this to happen light sources must fire at different time. There is no other resolution. If we were talking about the stream of bullets in stead, there would be no need for invoking different times because adition of velocities would easily apply. Another thing I must add, regarding my question how the light knows.It does not. It seems that it has to know but if I set up this same thing describeing in advance that light sources fire non-simultaneiously than it would be easy to see that train observer would observe these events of firing to be simultaneous. and only explanation needed is that light travels with the speed of c in regard to him. What is still strange and funny is the fact that we have two different configurations of the same wave. If we now add third observer we would have a third spherical wave attached to him also. So it is funny that way. But I must add in the and that every book describing this relativity of simultaneity should make it clear that one center of the sphere is there for one observer and the other is for the moving one, ore differently, that one observers can not observe him or herself moving in relation to a light but can observe the other observer to be doing that. 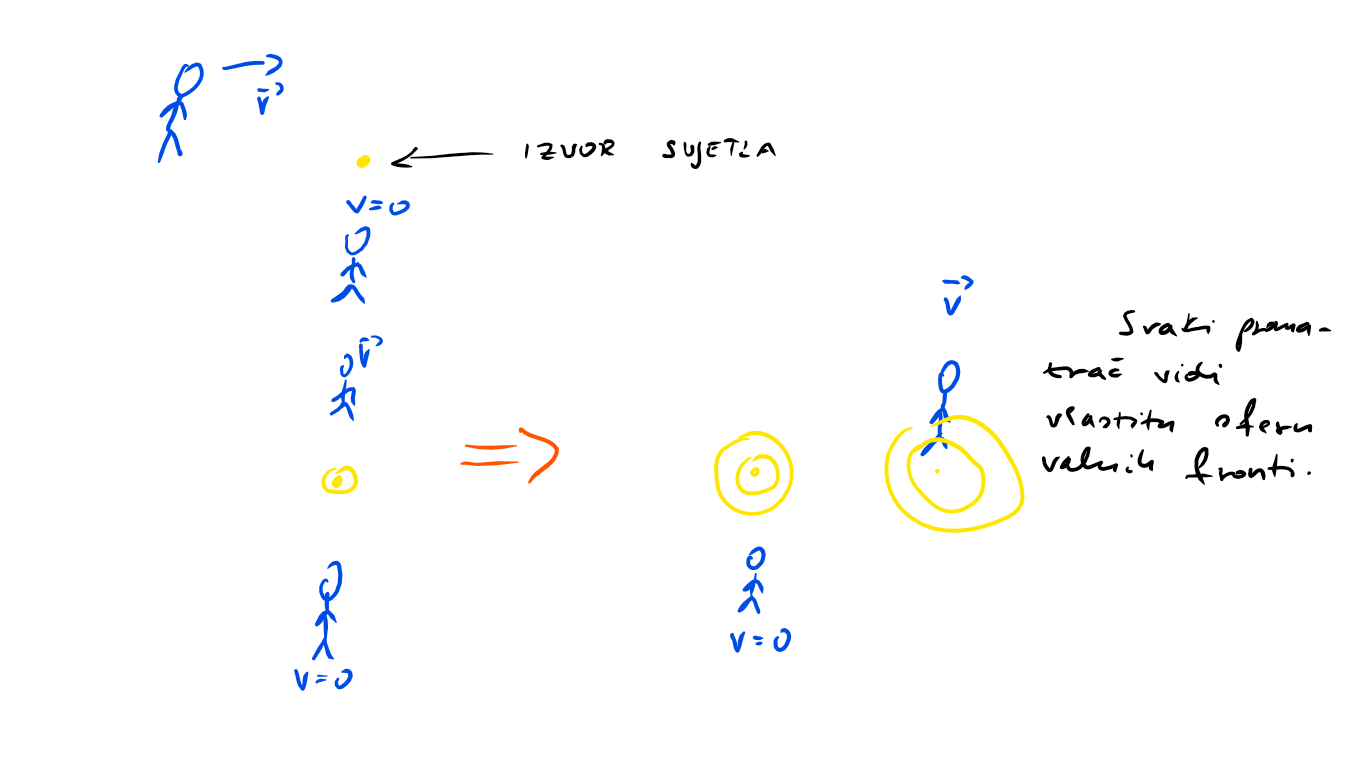 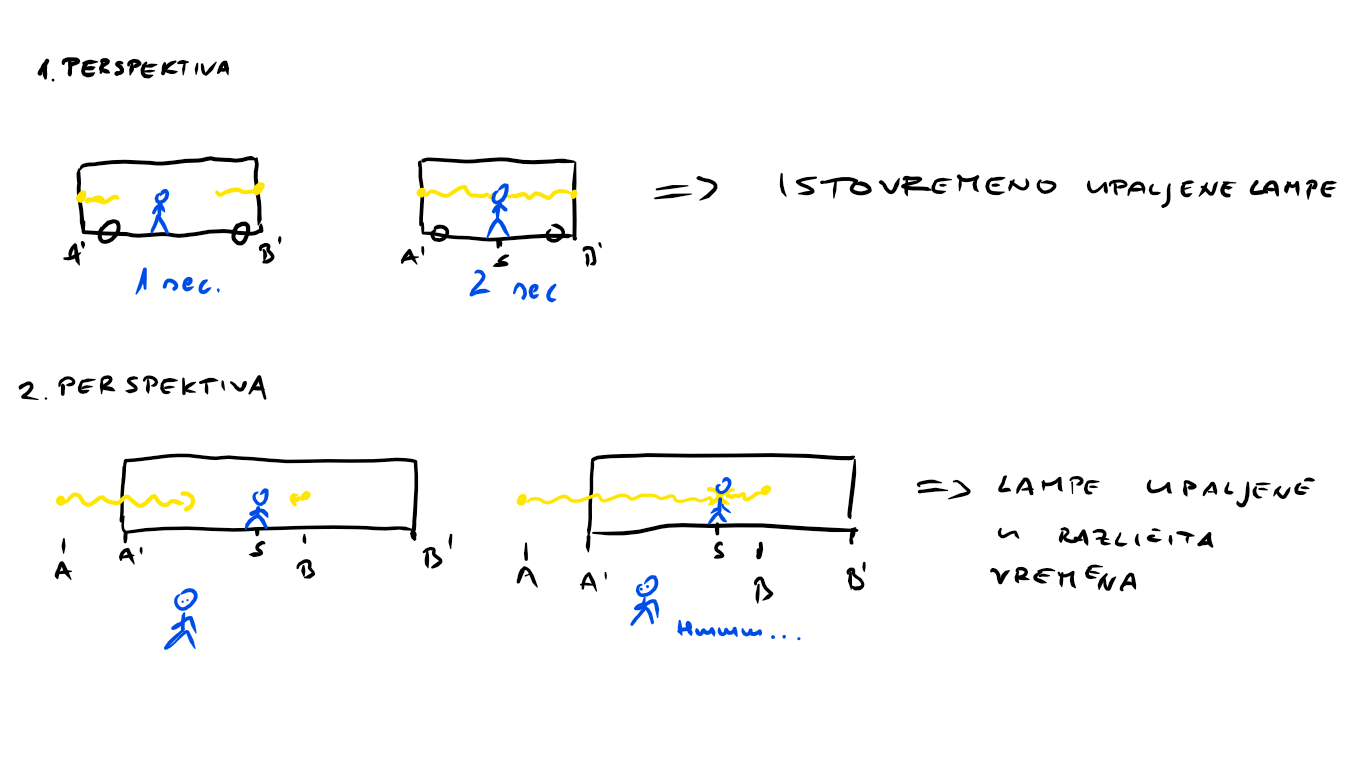