What is strain? Why does DNA coil upon itself?

I have been reading Lehninger's Principles of Biochemistry to understand DNA supercoiling (pg-930).

Supercoiling is the twisting of a DNA upon itself and this happens when the two helically wound strands of DNA are either underwound or overwound. The book says that this act of underwinding or overwinding generates a structural strain which is then accommodated by coiling of the DNA upon itself (supercoiling).

Here the word strain has been used in the way stress of mechanical physics would be used. I wonder if it means stress.

Besides I would like to know how underwinding or overwinding cause the DNA to coil upon itself.

Excerpts from the book:

DNA supercoiling is generally a manifestation of structural strain.

Most DNA are negatively supercoiled (which means that the supercoiling is left handed). In almost every instance, the strain is a result of underwinding of DNA double helix.

Supercoiling is not a random process; the path of the supercoiling is largely prescribed by the torsional strain imparted to the DNA....

P.S. The description of the question has been changed recently.

I would like to know how underwinding or overwinding cause the DNA to coil upon itself.

Adding turns to the DNA, the molecule stores elastic stress, or torque, up to a point where it buckles like the old phone cables, making secondary structures called plectonemes (which are important and regulated in living cells).

Probably the best reference for the mechanics of all this is the first direct experimental observation of the so called "DNA buckling transition" (access here, original PRL here). This is also a good keyword to find more information. In this paper, the transition was triggered and observed on a single DNA molecule under constant tension while applying turns to it, using an advanced angular version of optical tweezers, which can measure and apply both tension and torque of a single molecule, like in the figure here. 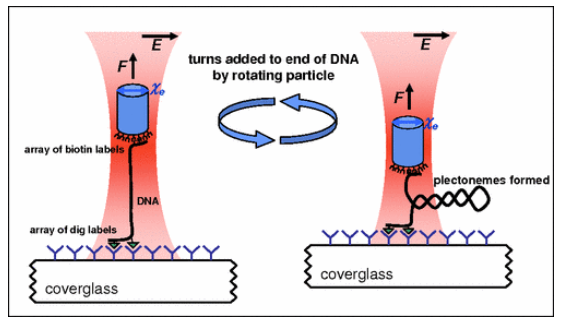 What they see is that, adding turns and over-winding the DNA from its equilibrium conformation (1 turn every ~10 bases), torque builds up linearly (see fig.below). In this regime DNA is treated as an elastic rod. From the paper:

Prior to buckling, DNA may be modeled as a simple elastic torsional rod. As twist is applied to the DNA, the restoring torque $\tau$ will increase linearly with the twist angle, as given by $\tau=C\frac{2\pi n}{L_o}$, where $L_o$ is the contour length of the rod with 1 bp [base pair] corresponding to 0.34 nm, $n$ is the number of turns added, and $C$ is the torsional modulus.

Adding more turns, this linear regime ends abruptly (see fig. below): torque on the molecule stops and levels off, while at the same time the end-to-end extension of the molecule drops. What happens is that the first plectoneme is formed, and it eats quite a lot of molecule length (so its radius can be estimated). When more turns are added, the plectoneme region, twisting on itself and generating secondary plectonemes which take more and more percentage of the molecule length, prevents more torque to be stored on the molecule (therefore the torque has a plateau and the length goes down). 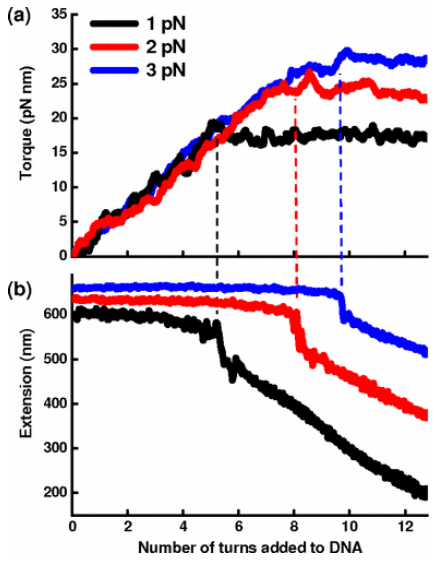 The paper discusses and compares theoretical models for the post-buckling. It's interesting that right at the buckling, bistability appears: there are two possible solutions for the global DNA structure (stretched and buckled), and the molecule hops between them triggered by thermal noise, as in the fig. below.

The biological actors that can modify in various way the turns of DNA are enzymes like the topoisomerases, helicases, polymerases... 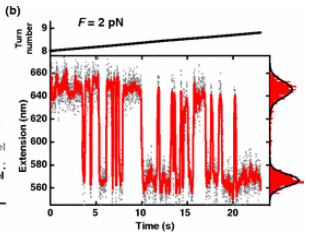 Strain is a material deformation. Stress is a measurement of the internal forces.

It's hard to really say one causes the other. When a material is deformed it induces stresses. You could also say that stressing a material induces deformation. You can have internal stress that is not necessarily deforming the part (on a macroscopic scale); but it will change how it reacts to other stresses.

They use them interchangeably because the mechanism and result are the same.

Not the answer you're looking for? Browse other questions tagged terminology biophysics stress-strain or ask your own question.

1
What is a strain gauge and how do I use one?
6
Does zero strain always imply zero stress?
2
Does resistivity of material change under strain
0
Why does the stress strain curve depend upon strain rate?
0
Why are there lots of definitions for strain?
0
What does strain actually mean?
0
What Changes a Stress-Strain Curve?
0
Does stress and strain change density?