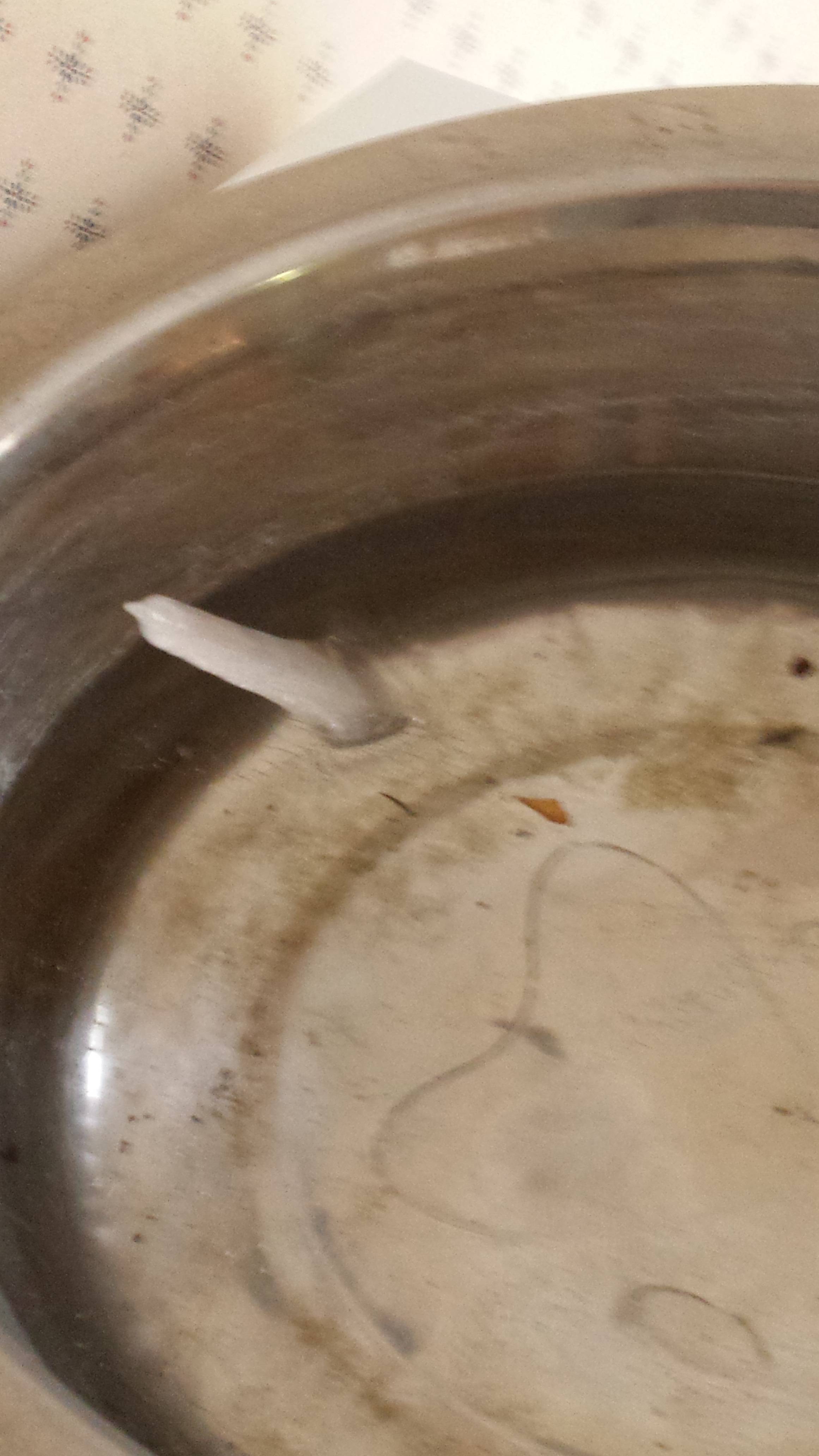 Ice spikes are fairly rare but there is a general consensus about how they form from extruded pressurized water in containers subjected to below freezing conditions. This morning as I fed my dogs I found the above pictured ice spike in their outdoor watering dish. The spike formed near the edge of the dish, was approximately 8-9 cm long, protruded at about a $45^o$ angle, was fairly flat on the upper surface but ovoid on the lower surface, and was very pointed with the base much larger than the rather short tip.

The outside temperature overnight was $2$-$3^o$ C below freezing. There was freezing rain overnight so the relative humidity was near 100 %. The dish was in a protected corner so no rain hit the surface, but normal outdoor air currents would have prevailed. The water in the dish was collected by a dehumidifyer, but the dish itself was not particularly clean as the photo shows.

In online searches about this phenomenon I learned that they can be normal to the liquid surface, or slanted like the one I observed. They are also sometimes wider at the top than at the base unlike the pointed spike I observed. They sometimes look like inverted pyramids. My question concerns the explanation for the diversity of shapes and angles that these ice spikes exhibit. Are air currents the complete explanation, or are there more subtle things involved here?

I feel the above link cited is not a duplicate, as it does not ask for the slant, or shape associated with some spikes. It simply enquires how they are (in general terms) formed.

In online searches about this phenomenon I learned that they can be normal to the liquid surface, or slanted like the one I observed. They are also sometimes wider at the top than at the base unlike the pointed spike I observed. They sometimes look like inverted pyramids. My question concerns the explanation for the diversity of shapes and angles that these ice spikes exhibit. Are air currents the complete explanation, or are there more subtle things involved here?

Just a quick run through based on what I do know, then my guess as to why ice spikes are slanted.

Ice spikes form as, rather obviously water, undergoes a phase transition to ice.  Due to it's molecular composition, the water freezes on the water's surface, and also freezes inwards from the edges of the container, (or an a larger scale, from a lake shoreline towards the center of the lake).

Especially in a container with any degree of symmetery, this will continue until just a small hole is left unfrozen in the surface.  Simultaneously, whilst the surface water is dropping below the freezing temperature, extra ice accumulates around the sides of the container, say an ice cube tray in this example. So far, so standard.

Now my guess: bearing in mind most of this well known, as the ice follows its normal freezing pattern, it's room for expansion is limited on the surface, so it will tend to freeze along the edge of the container in a downwards direction. It's extra volume due to expansion causes pressure on the still liquid water beneath the ice and it will effectively force the water through the hole left in the surface ice. In a perfect world, the hole would be completely circular and the ice around it of even thickness, (but it's not a perfect world), so that the water emerging, very slowly, and freezing as it does so, is given an initial off vertical tilt, as it flows to one side, the lower side. Also in a perfect world, the cube containing the water would have the ice hole located plumb centre, (which it is not), so the pressure of water is not symmetrical and will act to reinforce the slant of the ice spike. This process will continue overnight and the extra water will be forced up the sides of the original, slanted spike, this accentuating the slanting effect, with uneven pressure forcing water up one side more than the other.

EDIT My slightly modified solution to this question is to include the surface thickness of the ice layer near the central hole. Instead of being a very thin layer, if it has sufficient thickness, then any unevenness, a "pressure ridge" to be slightly dramatic, tilts the hole at an angle to the surface plane, (which may be severe millimetres thick) and causes the extruded water to emerge, freezing as it goes, at an angle determined by the tilt of the ice surface. So instead of a hole, we have a funnel. The upwelling water then continues the process and extends the tilted spike. A reference which may support this idea can be found at Slanted Ice Spikes END EDIT

This uneven pressure of water "climbing" the sides of the spike may also be the reason why the spikes assume the shapes they do. The effects may, as the question asks, be due to wind/breeze effects but I feel I can explain the shape and slant of the spikes using water, with more confidence than I can with any reference to air currents. The "duplicate" to this answer goes into more detail regarding the role of ice crystal formation, in the produced of inverted pyramids, which I am unable to address or comment upon, due to simple ignorance on the subject of crystallography.

Not the answer you're looking for? Browse other questions tagged air ice humidity or ask your own question.

0
Name of the process that causes ice to melt under pressure and refreeze after
0
calories in ice
0
Melting ice pattern
11
How do ice spikes form?
0
Is ice harder than steel?
0
Fastest way to melt ice cubes in glass of water