Homework question: calculating radius and mass of planet from velocity and time

Consider a planet and a sun rotating about their center of mass. The sun has a mass 0.9 of the mass of our sun.

I must calculate the planet's mass in terms of jupiter's mass and the planets orbital radius in terms of earth's radius – I don't understand what this radius means. Aren't orbits elliptical, or are orbits about a center of mass actually circular?

I've tried a bunch of approaches but can't get anything to work.

Now for the first equation, we don't actually know what the final velocity of the star is unless we introduce kinetic and potential energy.

Then writing out the (very long) equation for energy

We want to solve for the mass and radius of rotation of the planet. We have four unknowns $v_{pi,f}$, $r_p, r_s$ and have three equations. What do I do? Edit

The fourth equation can be written down as $a_{red} = \frac{v^2}{r}$ where r is the reduced radius and the acceleration is that of the reduced mass. 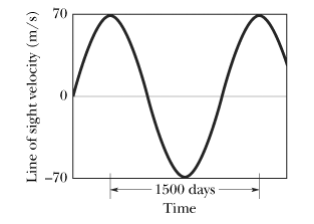 I don't understand what this radius means. Aren't orbits elliptical, or are orbits about a center of mass actually circular?

I think that you will have to assume a circular orbit - otherwise, "radius" has no meaning as you correctly point out.

As for the main body of your question - I think you are making this harder than it needs to be.

You are asked to compute the radius in terms of Earth's radius. Now we know from Kepler's Laws that

There are only two unknowns in this equation: $r_p$ and $m_p$.

Next, since you have the line of sight velocity and the period, the distance $r_p$ of the planet to the center of rotation follows immediately:

Now that you have $r_p$ you can substitute into (1) and that should give you your answer.

Converting these to the radius of Earth and the mass of Jupiter should be straightforward. It might be worth calculating how different the answer would be if you could assume the planet to be "light" - then the simple case of Kepler's law would tell us

This is not the answer to your question - but how far off is it from the answer you get from the above? Before you do the calculation askyourself this - do you expect the number to be bigger or smaller?

Not the answer you're looking for? Browse other questions tagged homework-and-exercises newtonian-mechanics angular-momentum energy-conservation orbital-motion or ask your own question.

3
About binary stars and calculating velocity, period and radius of their orbit
1
What is the relationship between mass, speed and distance of a planet orbiting the sun?
0
Quick question on derivation of mass of star
0
Can the constant $k$ from Kepler's third law be independent of the mass of the planet?
3
Gravity assist, Coordinate system transformation
0
How can I calculate the semi major axis from velocity, position and pull?
0
Minimum velocity to maintain orbit around a perfect sphere
33
Is there a maximum distance from a planet that a moon can orbit?