I have an example from a paper for the bottom 3 singlet states of He$^{2+}_2$. My task is to show which transitions between these states are allowed (ie. transition dipole moment is nonzero), derived via the integrals. I would like to ask for advice on setting the equation up and approaching the solution properly.

The 3 singlet states in question are:

where A and B represent helium atoms A and B, and 1 and 2 represent electrons 1 and 2. The first state corresponds to the ground state and the latter two states are asymptotically degenerate in the limit of infinite separation of the helium atoms.

Now, I could be totally off course, but here is what I've done so far:

Setting up my transition dipole moment for the lowest transition, I have:

where I left out the coefficient $\frac{1}{\sqrt2}$ and on the right side, $q$,to minimize clutter.

Multiplying out, I end up with eight terms. This is where I stumble as I don't know how to simplify further. I'll split them into separate rows because it looks like a mess otherwise.

Now, I know the 2$^1\Sigma_g\>$ -> 1$^1\Sigma_g$ should yield an odd integrand and result in zero. The integral for this forbidden transition would result in the same 8 terms only without negatives. So in the case the terms are all positive, somehow they must cancel out to zero, but in the u -> g case they do not. I expect therefore some connection between the negative terms in deciding whether the dipole moment is nonzero or not. Is there a further step I can take here?

Similarly, the last combination is

which comes out to:

Again, I know this one should not be zero, but I don't know what the next step would be, if there is a next step I can take.

Any advice on how to proceed further or correcting mistakes thus far is appreciated, thank you.

So after further work on the problem (and crucially asking a PhD for orientation), I believe I have solved the problem.

I will leave out the q's from now on, except where the final result is written. The normalization coefficients are not necessary to include as will be shown later.


These can be simplified by recognizing that a non-diverging, normalized function integrates to 1, eg. $\frac{1}{\sqrt{\pi}}\int{e^{-x^2}dx}=1$. Of course I left out the normalization coefficients of the eigenstates above (as well as below here) but adding them in should by definition yield that result.

Clearly these four simplified terms nicely cancel out, leaving us with the four remaining terms. At this point, we define the overlap integral $S_{AB}=\int{A(x)B(x)dx}$ to reduce the remaining terms. 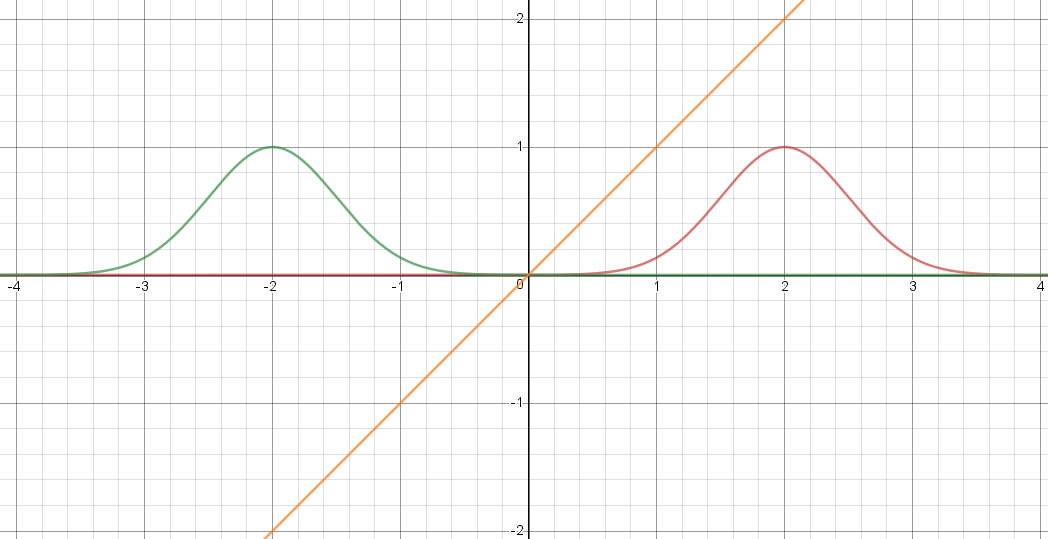 You can prove such an integral is zero by setting up the equation as:

for a system not at the origin.

Steps for solving the latter integral

Because we have now shown this is an odd function, we know that the integral to the left of the origin in the plot above must be equal and negative to the integral on the right. This means that

and substituting this in for our 4 terms above will allow us to add together $r_1$ and $r_2$ terms, respectively. We are now left with just two terms from our original problem:

and this is in fact our solution. In summary:

where the normalization constants of $\frac{1}{\sqrt{2}}$ even do us the favor of canceling out the 2 coefficient. Our transition dipole moment is non zero, as expected. At large distances however, it will disappear as the overlap integral goes to zero.

We began our solution above by removing normalized integrals, thereby canceling out 4 terms. This will no longer be possible for the gerade-gerade transition, since there are no negative terms to subract. However, we later showed that we are dealing with an odd function. By this symmetry, these same 4 integrals will still go to zero. Subtraction is not necessary to cancel them out.

In the case of a gerade-gerade transition, there is no negative sign to cancel out this antisymmetry. This means the last 4 terms will not add together but subtract, leading to zero.

Thus all 8 terms result in zero transition dipole moment, as expected of a gerade-gerade transition.

The result after multiplying out was

This can be broken down into 2 terms in the same way we did above. First, we utilize their normalization to remove any integrals of the form $\int{C(x)^2dx}$ as 1. Then we combine A and B terms by their symmetry $\int{A(x)dx}$ = -$\int{B(x)dx}$. These steps leave us with our two terms:

where the 2 coefficient has also again been canceled out by the normalization constant on the eigenstates. This transition is clearly non-zero as expected of a gerade to ungerade transition. The solution,

I hope that helped someone!

Not the answer you're looking for? Browse other questions tagged quantum-mechanics homework-and-exercises spectroscopy or ask your own question.

2
Is a permutation of coordinates or labels really equivalent?
5
Understanding the Selection Rules of a Spin-Forbidden, Magnetic Dipole Transition in Molecular Oxygen
5
Meaning of dipole approximation for selection rules
3
Electronic-vibrational-rotational Transition