How bad would it break physics if dark matter was not “particles”?

Some people suggest that dark matter might not even be particles at all —that’s just what physisists expect to find with reference to what they are familiar with.

But, I learned, from layman books of those physicists who care to educate the masses (it might have been Feynman), that once you introduce the concept of uncertainty then it necessarily spreads in any additional mechanism that interacts with the first. Otherwise, it would lead to a violation of the uncertainty principle for the first channel. A similar argument is explained in this Phys.SE answer for gravitons “and any other physical properties of the world”.

So, since cold dark matter does interact (even if only through gravity) with normal matter, I counter that it must show up as quantized particles in those interactions.

Furthermore, the same contagination principle means that it can’t act in some bizzare way with respect to interactions in that sector and only be quantized when interacting with matter.

Is that essentially correct?

More interestingly, just how much would you have to mess with physics in order to make it otherwise? Is there some “reasonable” way to fit it in, or is it so byzantine as to be not seriously worthy of consideration, or has it in fact already been excluded by known observations? 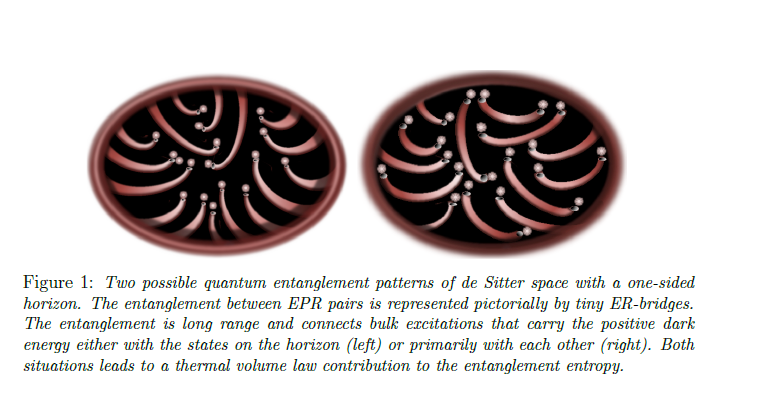 These entanglements carry dark energy across these Einstein-Rosen (ER) bridges that are defined in the ER = EPR equivalency. This results in different bulk distributions of entanglement entropy, and thus different curvature perturbations of spacetime. For pure entanglement with the boundary, such as what would happen with AdS this is a form of the AdS equivalency with a conformal field theory (CFT) on the boundary. Then gravitation in the bulk of the AdS is equivalent to the CFT on the boundary. For the right hand case in dS these entanglements are "free" and not exclusively attached to a boundary or horizon.

For the Schwarzschild spacetime with two timelike patches a particle inside a black hole can be entangled with a state in the two regions I and II. In the diagram below the red loop corresponds to an $O(\hbar)$ quantum fluctuation or loop can appear to an observer as a particle seen as the red dot in region I that is entangled with a particle in region II. However, since this is superposed with a loop both particles are equivalent to a particle inside the black hole corresponding to any point on the loop in region III. In this way a bipartite entanglement of a particle with a black hole does not turn into a tripartite entanglement after the page time, because there has been ultimately a redundancy in counting particles! These ER bridges identified with entanglements are the region III of black holes, and ER = EPR means that quantum entanglement is fundamentally equivalent to a black hole, and that quantum entanglement in a way "stitches together" regions of spacetime, such as these ER bridges. 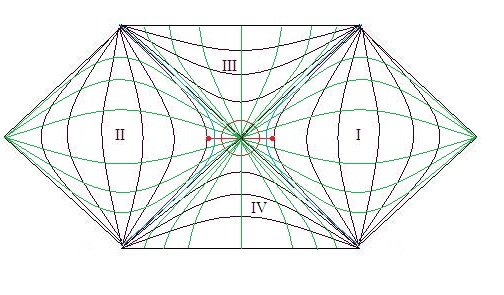 So I would say that as things stand now, which is with a big range of uncertainty of knowledge, that it could be the case that Verlinde's argument or something similar could demonstrate that DM is a pure quantum effect.

It's actually hard to say how bad it would break physics, because the information we would need to know is not available (or at least, not available without a Delorian and enough gas to reach 88mph)

Physics doesn't define reality, it models it. It says what we should expect from reality based on the empirical observations we make. We don't state "dark matter exists," so much as we state "if you model reality as though dark matter exists, your predictions will more accurately align with your future observations." The latter is longer, and harder to say, but it's what we really mean.

So all physics can do is churn the crank on the observations and see if we ever see any behaviors from dark matter which are not well modeled as particles. If we do see discrepancies, then it is the nature of those discrepancies that will decide how badly physics has to break. However, we simply cannot know that until we observe it.

For all we know, dark matter could be a pure mental substance beyond the laws of physics. I would say that would "break physics" rather soundly, though I would not make the claim that that hypothesis has all that high of a likelihood. Or it could be that we find that it was just normal matter all along, and we just royally messed up while observing/analyzing it. (the embarrassment of such a prolific body of evidence turning sour may do more to break physics than any funny squiggly particle-like thing ever could). It could be that what we discover becomes evidence for string theory. The string theorists have been fitting their theories to the observations we've made, but there's no reason future observations might not make their job easier! In that case, physics might not break at all!

Not the answer you're looking for? Browse other questions tagged particle-physics dark-matter beyond-the-standard-model or ask your own question.

13
Why does gravity need to be quantised?
14
Has Verlinde's theory made significant advance recently?
2
How can there be regions in space with only dark matter in it, if dark matter derives from entropic gravity?