What limits a batteries current when its terminals are connected with a low resistance conductor?

My question essentially is concerning what (if anything) prevents really high current flow (amperes) in a battery if the terminals were to be connected directly with a low resistance conductor?

For Example this website has the following chart pertaining to the internal resistance of various batteries: 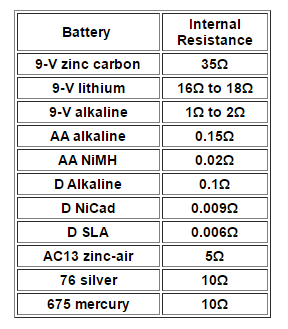 So lets assume I have an AA NiMH battery and use Ohms Law, we will also account for a minimal ammount of additional resistance (.003 ohms) from the conductor wire itself just to further illustrate the point: 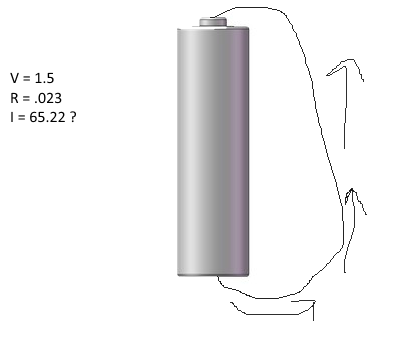 Is this what really happens when battery terminals are directly connected, and if not what is the other limiting factor that prevents a super fast current from occuring besides the natural resistance of the battery and the wire?

Batteries are decently complicated devices. They're certainly more complicated than an ideal voltage source. As you've noticed, we often model them as a voltage source with a series "internal resistance." This is a better model which works well in a large range of conditions, but still not a true model of how batteries work.

When you short a battery out, initially you do get the very high amperages you calculated. However, as the short continues, chemistry gets involved. Inside the battery you have two materials reacting with each other to provide the electrical energy. In the case of your example battery, NiMH, the reactions are:

Noe that the negative terminal produces hydroxide ions and the positive terminal consumes them. Also note the double arrows on both equations. The equilibrium point depends strongly on the concentrations of the compounds.

In normal operation, the hydroxide ions have time to work their way from the negative terminal to the positive terminal, keeping the reactions going smoothly. However, in a short, there will be a build up of hydroxide near the negative terminal because it takes time to diffuse away from the terminal. This will reduce the rate at which the reaction occurs, reducing the maximum current the battery produces in this short example to below what you would expect from modeling the internal resistance alone.

Also, depending on your battery, there may be 3rd order effects. You're going to generate lots of heat in the battery, and that causes reactions to change rates. Depending on the battery, this may accelerate the discharge. For an example of what these effects might be like, I point to this video of a lithium-ion battery. In this case the battery was *ahem* "encouraged" with a knife, but runaways like this for lithium ion batteries are not unheard of.

Not the answer you're looking for? Browse other questions tagged electricity electrical-resistance batteries or ask your own question.

12
Why can different batteries with the same voltage send different currents through the same object?
1
Simple ohms law on a battery ? Paradox or conceptual error?
4
Why does not a battery kept in empty space discharge on its own? If space between the terminals is empty, what prevents the electrons to flow?
2
Why does the LED turn off if the high current is going through the short?
0
How does connecting two batteries in series equalize the voltage, if current is not stored at the terminal and is generated when a circuit is complete
7
Does an electric current flow in an open circuit?
19
Why doesn't the voltage increase when batteries are connected in parallel?