In this website, it states that if we have a two particles system and measure from centre of mass, then the following equation holds:

Question: How to obtain the above equation?

Centre of mass is defined to be the weighted sum of all moments. So it is not surprising that centre of mass can be expressed as follows:

where $x_1, x_2$ are distances from a reference point to the two masses.

I think the existing answers are making this a lot more complicated than it needs to. You are correct that the equation for the position of the center of mass is,

If you were dealing with vectors and displacement, then you would want: $$m_1 x_1 = - m_2 x_2$$ which shows that one mass needs to be placed on the opposite end of the first.

To be honest that page is at best incomplete; they introduce $r_i$ as "where $r_1$ and $r_2$ locate the masses" without drawing them into their figure and without specifying what they mean with "locate".

This is not mathematical answer. This is inituitive. (Edited. Now better.)

The center of mass of the two objects lies somewhere in the line joining the point masses $m_1$ and $m_2$.

Now suppose that $m_1>m_2$ and the center of mass is J (in the figure below). If we start adding tiny $m_1$ masses from the left end and $m_2$ masses from the right end along the string without disturbing the center of mass we end up making a rod-like structure like that shown in the figure. The center of mass is at J, the joint of the thick and thin part of the rod. Since $m_1$ and $m_2$ are mass per unit length as assumed earlier so $m_1r_1$(mass per unit length times distance) is the mass of the thick part and $m_2r_2$ is the mass of the thin part and they must be equal. 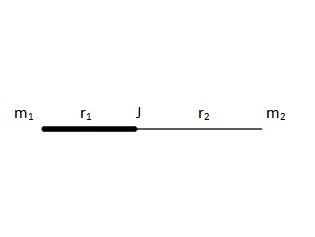 A good way to think about it is to express the centripetal force as $F=mrw^2$ (or Mr Omega squared). What you do is explain why omega is the same and so it cancels out since the grav force is the same on both.

If the grav force didn't pass through the centre of mass the other planet/star would either accelerate or decelerate to compensate. As a result both orbit the CoM in a circular orbit and the (line of action) of the forces are in line with each other. The only way this can happen is if they orbit exactly Pi rads out of phase with the same omega.

Not the answer you're looking for? Browse other questions tagged mass or ask your own question.

23
What is the exact gravitational force between two masses including relativistic effects?
1
Calculating Gravitational Attraction Involving Massless Objects
4
Determining Mass of Spectroscopic Binaries
1
Why neutrino mass hierarchy scenario do not include the case $m_2<m_1<m_3$ and the case $m_3<m_2<m_1$?
0
Two-body problem: reduced mass velocity to individual velocity
0
Algebraic steps to Laplacians relation
2
Clarification of "inertial mass" explanation
2
In general, conservation laws do not hold whenever the center of mass of the system is moving?