Do objects with mass "suck in" spacetime?

I don't really understand the general theory of relativity (GTR) really deeply, but according to my understanding, the GTR say that gravitation is caused by the curvature of spacetime by objects with mass. This makes some sense when you are talking about a moving object having it's course changed by the gravitational influence of another object. It seems that gravity is changing which direction is "forward" for the moving object and the moving object just continues to move "forward". However, what does this mean for objects that fall toward the Earth with no horizontal component to their motion? The object wasn't moving relative to the Earth, so how can gravity change the meaning of "forward" for the object? If gravity doesn't change the object's location in space during the fall, do the Earth and other objects with mass "suck in" spacetime?

You can indeed think of gravity as changing which direction is "forward" for a moving object. But the key idea is that gravity acts in spacetime, not just space.

An object that is sitting still in space is still "moving" in spacetime*, it's just that all its "motion" is through time, not through space. In other words, the forward direction for this particle is time. Gravity changes the forward direction for the particle to include a little bit of space as well, so it starts moving through space. That's how gravity can accelerate a particle from rest.

You did switch from the Newtonian law to the GTR model but didn't incorporate one of the chief differences that comes from The Equivalence Principle:

It is only when there is numerical equality between the inertial and gravitational mass that the acceleration is independent of the nature of the body. — Albert Einstein

In other words, according to GTR, interia is the same as free fall and will be the natural state (i.e., when no other forces are acting on it) of any object with mass.

This is an extremely exaggerated representation of gravity. Because the further away you move from something with mass the faster you pass through time due to time dilation. This creates a "time gradient". If you look at the image, the squirrel's head moves through time faster than its feet, so it rotates. This rotation causes the squirrel to pass through time differently and curve toward the earth. In the 3 dimensions of space, it looks like it falls straight, but in the picture, you can clearly see that the squirrel does in fact follow a curved path. It does not rotate in the three spatial dimensions, only in the fourth dimension. According to special relativity, a rotation in the dimension of time manifests as the object getting shorter the closer to light speed it gets. Technically in the last two time frames, the squirrel is moving faster than light, which breaks special relativity, but as I said, this is exaggerated. In real life, things accelerate much more slowly. It's just exaggerated for emphasis. 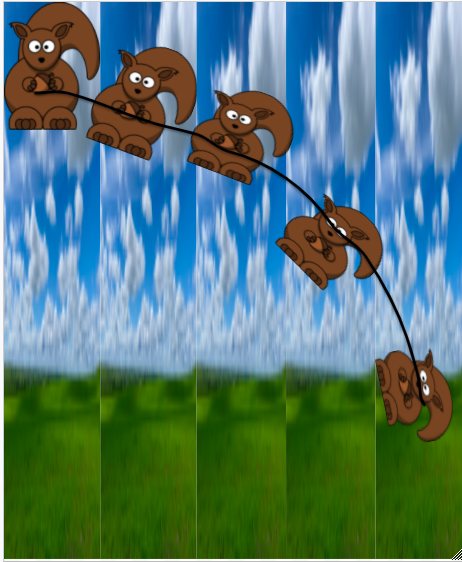 First, I'm not an expert on physics, but I've logged thought and research into this. Einstein said that accelerating in a spaceship at 32.17 ft/s^2 would be the same as standing on Earth and that the ground is actually pushing us upward.

I believe you are right. Gravity sucks space-time; it does not bend it.

Therefore, a falling object does not move until it hits the ground. Think of the ground, in this case, as the spaceship. Here is the scary implication, every object of mass is "sucking" space-time faster and faster and we are by consequence accelerating, otherwise we would not have gravity.

The moon is said to be moving in a straight line in space, if it cannot have a negative y-component, then neither can a falling object with no x-component.

The moon itself, traveling in a straight line, appears to move close to Earth because the space it enters at point B was actually much higher when the moon was at point A. I wouldn't doubt if you studied Kepler's Laws you could mathematically prove this, and I'm sure somebody already has.

I have been told by an astronomer at Cornell that this is not the case, that falling objects go in a straight line down as the moon goes in a straight line sideways, but this is too contradictory for me. I think some people have trouble fully comprehending Einstein's ideas, but now that I do, it's way too simple.

PatrickPatrick
7
$\endgroup$
Add a comment  |
Highly active question. Earn 10 reputation (not counting the association bonus) in order to answer this question. The reputation requirement helps protect this question from spam and non-answer activity.