velocity of an object after leaving a ramp 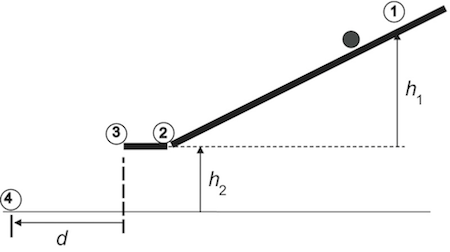 at point no. 2 in the diagram, let the object accelerates to a velocity v1 (just along the direction of the slope) due to rolling down the ramp. Now, v1 has a x-component as well as y-component.

Now, my question is:

In the diagram, In between the points no. 2 and 3, the object passes over a horzontal distance. During this part of motion, which statement of the following is true:

i) the magnitude of the velocity remains constant, i.e. equal to v1, and only the direction changes.

or, ii) the magnitude of the velocity changes, in such a way, that only the x-component of v1 remains still; whereas, the y-component of v1 completely vanishes, as soon as the object leaves the ramp and gets onto the horizontal trajectory(between the points marked 2 and 3).

Neither of the 2 answers is true. You ask about the velocity between the points 2 and 3.

Answer 1. is false because the direction of the velocity is horizontal and to the left at all points between 2 and 3.

Answer 2 is false because the magnitude of velocity is constant between 2 and 3.

I think what you are really concerned about is how the velocity changes at point 2. This cannot be decided without further information about the apparatus.

If there is a smooth change in the direction of the ramp at point 2 then the magnitude of velocity will be constant, only the direction changes (Answer 1). The velocity between 2 and 3 is $v_1$, the same as it was at the bottom of the incline.

Judging by the gap I would be inclined to think there is a sudden change in direction, in which case Answer 2 is correct.

It is answear 1: After the acceleration due to the vertical component of motion the magnitude of the velocity stays constant. You can try it out by bicycling down a hill. The energy has to be conserved, so if we have no friction or deformation of the material to absorb or transform it, it has nowhere to go. If the angle is too sharp or the velocity too high the ball might also bounce back (for example if it hits the ground with a 90° angle) but as long as the kinetic energy is not absorbed or converted into potential energy on a way back up it stays constant.

Not the answer you're looking for? Browse other questions tagged homework-and-exercises newtonian-mechanics velocity vectors or ask your own question.

1
What is causing the normal force in circular motion?
3
Understanding rotational motion on a rough surface
2
Conceptual question regarding velocity in projectile motion vs. up a ramp
2
Rolling of an object down a slope
2
Force perpendicular to velocity
0
What is the resultant radial force that generates the circular motion of a point mass rolling down a sphere located on the surface of the Earth?