Note that this isn't a homework problem, just a question the concept. 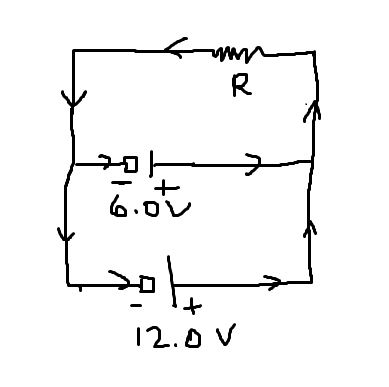 Let's take this quick circuit I drew up just now in MS paint. There are three different currents, one for the top, middle, and bottom branches. The bottom two branches have a voltage source on each, and there's a resistor in the top branch. So we have some set values for the current in each branch, found by using Kirchoff's rules.

Now I add an extra bit of wire at the top, around the resistor: 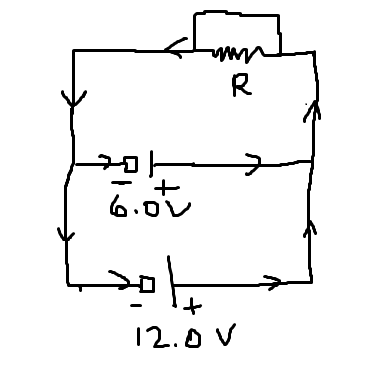 Is this what a short circuit is? What happens to the current at the top? Does it go completely around the resistor and through the added wire? Or does some of it still go through the resistor? Certainly something would have to change in order to find the currents again, using Kirchoff's rules.

People often say that current takes the path of least resistance, but it feels like that's not completely true.

I don't see why you need two batteries to ask your question. To work with a minimal example where you're question makes sense I suggest removing the 12 V battery from the circuit.

If we do, then you first diagram becomes a 6 V battery and a resistor. If we say $R=1 \Omega$ for concreteness, the top circuit has a current of 6 Amps.

In your second figure, again disconnecting the 12 V battery, there will be no current through R. It is indeed a short circuit in the sense that you have essentially connected the positive end of the battery to the negative end.

There's two quick calculations I might suggest trying to get some intuition.

The second is to compute the current through $R_2$. As $R_2$ gets smaller you'll find the current getting bigger and bigger, tending to infinity. That basically shows if you short circuit an ideal battery as you've drawn, you'll get infinite current. A real battery has a finite resistance (you can model that by putting a resistor r in series with the 6V battery). That will make the current finite. (Although if you try it in a lab your battery might explode).

Not the answer you're looking for? Browse other questions tagged electric-circuits electrical-resistance short-circuits or ask your own question.

2
Circuit analysis (Kirchoff's laws) for multi terminal resistors
4
Why aren't resistors equivalent to breaks when $R\to\infty$?
2
Is a real voltaic cell always schematically equivalent to an ideal battery and a resistor?
1
Is voltage across parallel branches still equal if there's a break?
0
Currents in circuits
2
Why does the LED turn off if the high current is going through the short?
0
How to solve circuit problems with resistors in parallel then in series?
0
Effect of an open circuit in one branch on other branches of a parallel circuit
3
Resistors parallel to short circuit
0
Closed Loops inside a Circuit and Kirchhoff's Laws