What does the Ricci tensor represent?

I'm new to this site so I am sorry if I get the format wrong. However, I'm having some trouble understanding the Ricci tensor. I know it is found by contracting the Riemann tensor and that this is done so that its indicies match with the stress energy tensor in the Einstein field equations. I've tried many online resources, but none give a clear explanation of what the Ricci tensor represents, what I mean by this is for example the Weyl tensor, that is to do with stretching and squeezing of spacetime, however it's just the Ricci tensor I'm having issues with and what it's physical meaning.

It is important to consider the Ricci scalar first. I put here a diagram of a two dimensional sphere with radius $r$. From the pole a vector is transported to the equator and back so that the angle at $A$ is $\pi/2$ Now divide the angle by the surface area of the region enclosed by the parallel transport. This is $1/8^{th}$ the area of the sphere $4\pi r^2$ The result is the Ricci curvature for the region $R~=~1/r^2$ which is the Ricci scalar curvature of the sphere. In general for a parallel transport of a vector around a loop the deviation in the angle of the vectors defines the Ricci curvature as $$ R~=~\frac{\theta}{\cal A}. $$ 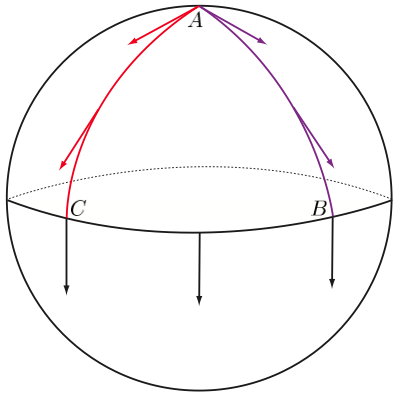 In general we may think of the Ricci tensor as due to deviation from flatness of a metric so that $$ g_{\mu\nu}~=~\eta_{\mu\nu}~-~\frac{1}{3}R_{\mu\alpha\nu\beta}x^\alpha x^\beta~+~O(x^3), $$ where $\eta_{\mu\nu}$ is the metric for flat spacetime. The metric volume element is $\sqrt{det(g)}$ or often written as $\sqrt{-g}$ and this is then $$ \sqrt{-g}~=~\left(1~-~\frac{1}{6}R_{\alpha\beta}x^\alpha x^\beta\right)\sqrt{-\eta}. $$ This means that the Ricci tensor is associated with changing the volume of a region of space. This is compared to the Weyl tensor that defines a volume preserving diffeomorphism. The Ricci tensor defines then a Ricci flow of the metric $$ \frac{dg_{ij}}{dt}~=~-2R_{ij} $$ In four dimensions we may think of this as the flow of a spatial metric with respect to time. This also has connections to conformal structure.

My naive answer, as you know already, is to create the Ricci tensor, you start with the Riemann 4 index tensor, then you find that to describe spacetime curvature, you (only) need ten elements on the Ricci tensor. That gets you a metric, if you are lucky, based around 4 D space. The tensor can be divided into the Weyl tensor, which expresses the tidal force that a body feels when moving along a geodesic, and the Ricci tensor. The vanishing of the Weyl tensor is the condition for conformal flatness of the space encompassed by it.

From: Ricci and Weyl Tensors

Ricci curvature results in magnification, whereas the Weyl terms provides astigmatism. It will turn circles into ellipses. The Ricci tensor will produce volume magnification effects.

Look at pictures of gravitational (Einstein) lenses of faraway galaxies for the physical effects.

Also you could read this: Meaning of the Ricci Curvature, which might be a duplicate.

Suppose instead of looking at two small objects in space, we considered a volume filling collection of small objects in space. Describing the relative acceleration of any two of them would require the geodesic deviation equation, but to describe the evolution of their volume, we would have to average over several diffrent versions of the equation. These have roughly the result of averaging the Riemann tensor into a Ricci tensor. So in roughly the same sense that the Riemann tensor governs the evolution of a vector or a displacement parallel propagated along a geodesic, the Ricci tensor governs the evolution of a small volume parallel propagated along a geodesic. We must be careful though. Unlike vectors, volumes may change along geodesics even in a flat space. We must therefore subtract any change that would occur in flat space.

I will stop here, as there many more people that can answer your question without giving you incorrect information.

Not the answer you're looking for? Browse other questions tagged general-relativity curvature tensor-calculus or ask your own question.

46
What is the physical meaning of the connection and the curvature tensor?
17
Visualizing Ricci Tensor