From reading D'Inverno’s book, what I gather is that the constancy of the speed of light is not a postulate, but something that inevitably results if u take $c=1$ and use light signals for measuring distance and time coordinates.

However, let’s say, i use sound wave instead of light to define distance and to measure time. In that way a unit of distance will be a sound-second ( rather than light second). Now if I define the speed of sound as $s=1$, then I can carry out the same $k$ calculus and in the end, after deriving the formula for velocity composition, it will turn out that the speed of sound is constant irrespective of the observers relative motion! Likewise anything other than light I use in the same way, same result will turn out!

I'm going to follow the notation on this page from Glenn Rowe's Physics Pages, which seems to be based on D'Inverno's book as well.

Suppose we have two observers: Alice & Bhuvnesh. Alice is at rest in her reference frame, and Bhuvnesh is moving at a speed of $v$ in the $+x$ direction away from her. Alice sends two light pulses towards Bhuvnesh, separated by a time $T$. Bhuvnesh then sends light pulses back to Alice as soon as he receives the pulses from Alice. 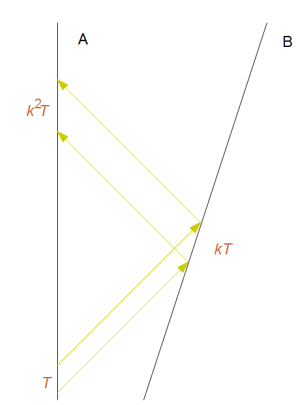 There is an implicit assumption in the diagram above: the $k$-factor for pulses being sent from Alice to Bhuvnesh is the same as the $k$-factor for pulses being sent from Bhuvnesh to Alice. This follows from the postulates of relativity; in particular, if all inertial reference frames are equivalent, and the speed of light is the same in all inertial reference frames, then these two $k$-factors must be the same.

But for sound waves, the second of these two postulates doesn't hold. In fact, the speed of sound differs depending on the speed of your reference frame. If you are at rest with respect to your air mass, it's the same in all directions; but if you're moving with respect to the air mass, then you will observe the speed of sound to be a little slower in the direction of your motion, and a little faster opposite the direction of your motion. This implies that the sound pulses going from Bhuvnesh to Alice will have a different $k$-factor (call it $k'$) than the sound pulses sent from Alice to Bhuvnesh.

To put it another way: in principle, the $k$-factor could depend on both the speed of the emitter $v_e$ and speed of the observer $v_o$: $k(v_e, v_o)$. The fundamental postulate of relativity is that only the relative velocities matter: $k(v_e, v_o) = k(v_e - v_o)$. But this is not true for the sound Doppler effect, and so the $k$-calculus derivation doesn't work.

[...] that the constancy of the speed of light [...] inevitably results [from using] light signals for measuring distance

Namely by using the opto-chronometric definition of "distance", i.e. for participants $A$ and $B$, if they were and remained at rest wrt. each other

(Consequently participants $A$ and $B$ agree on the value of their opto-chronometric distance from each other.)

Within this definition, the symbol $c$ is introduced as a particular non-zero formal factor.
Then considering the definition of "average speed" as ratio between the "distance between start and finish" and the "duration of the race track being occupied" and inserting the opto-chronometric distance definition from above, the value of the average speed of a light signal exchanged between two participants (who were and remained at rest wrt. each other) is obtained plainly and inevitably as $c$.

However: yes, the determination (comparison) of durations, for any one participant and also between distinct participants, can be based on the relevant participants observing each other. (As detailed for instance by J. W. Schutz "Independent Axioms for Minkowski Space-Time".)

The determination of simultaneity also plays a role (for determining the "duration of the race track being occupied"); by Einstein's well-known definition this involves applicable participants observing each other.

use sound wave instead of light to define distance and to measure time. [...]
it will turn out that the speed of sound is constant

Correct: plainly and inevitably $s$.
The derivation sketched above can be repeated in terms of "observing sound signals" instead of "observing light signals", and employing correspondingly the "acousto-chronometric distance" where symbol "$c$" is replaced with "$s$".

By referring rigorously and exclusively to the exchange of sound signals for determining geometric and kinematic relations you're surrendering the ability of determining "your speed through the air", by these means.

So why do we (conventionally, for simplicity and relevance) refer to the exchange of light signals, rather than sound, for the purpose of defining and determining geometric and kinematic relations?

By "light", in the context of relativistic geometry and kinematics (including the $k$-calculus, for what it's worth), we always mean the very first observation of a signal; the signal front; the relevant news itself, without regard to possible repetition or amplification or comparatively sluggish messengers.

As a result, the "speed of light, $c$", as obtained above, is simply the limiting speed for any kind of signal, and any thing (messenger) carrying a signal.

Not the answer you're looking for? Browse other questions tagged special-relativity speed-of-light reference-frames coordinate-systems or ask your own question.

5
Do Maxwell's equations independently impose constraints on the speed of light?
5
What does 99.9% speed of light mean when there is no absolute velocity?
0
Speed of light that is traveling away from the observer
5
Einstein's first postulate implies the second?
7
Isn't the “constant speed of light” postulate valid also for sound waves?
7
Circular definitions in Special Relativity?
1
Does a graviton in vacuum have a rest frame?
6
If clocks themselves are based on light signals, wouldn't we expect the measured speed of light to always be the same constant?
1
Postulate of constancy of speed of light in vacuum